PREVIEW: Pats kick off home and home with Broncos in Swift Current Friday 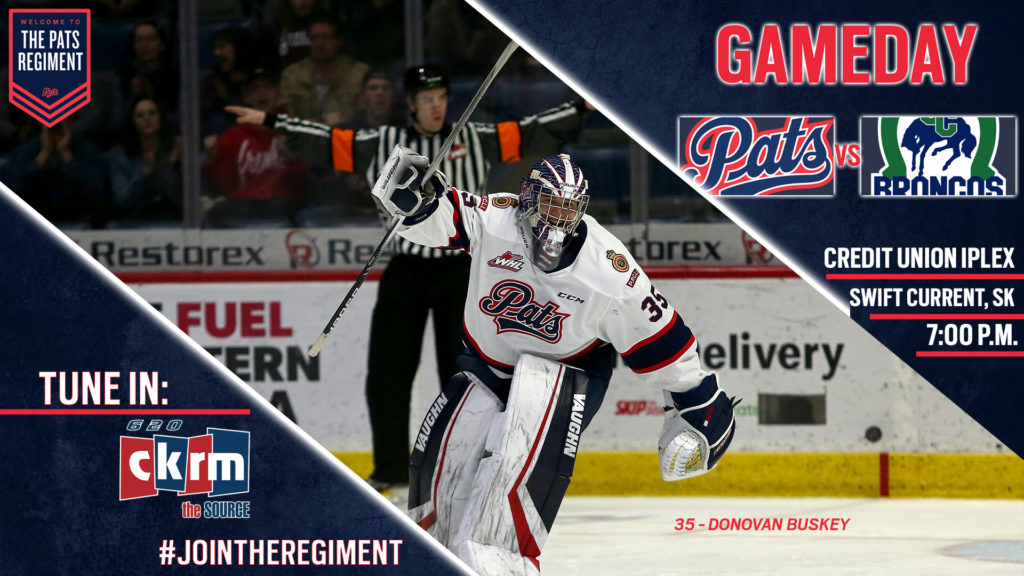 The Regina Pats (16-26-3-2) kick off a home and home set with Swift Current on Friday when they visit the Broncos (10-34-1-3). Puck drop is at 7:00 p.m. at Innovation Credit Union Iplex. The Pats won a third straight game on Wednesday when they beat the Blades 3-2 in a shootout in Saskatoon. The Broncos last game was on Saturday when they dropped a 4-1 decision at home to the Prince Albert Raiders. Tonight is the fifth of six meetings between Regina and Swift Current, the Pats are 1-2-0-1 in the season series. The game can be heard with Bennett Dunlop Ford Pats Hockey starting at 6:35 p.m. on 620 CKRM.

Quick Facts
– The Pats are 4-4-1-1 in their last 10 meetings with Swift Current
– The Pats have won three games in a row for the first time this season.
– Zach Wytinck has put up 18 points in 20 career games against Swift Current.
– Drew Englot returned to the lineup on Wednesday after missing six games and scored his 10th goal of the season.
– Riley Krane set a new career high in goals for a season on Wednesday with his 13th of the campaign.
– Donovan Buskey is 3-0-0-0 in his last three starts with a .900 save percentage.
– The Pats are 8-8-0-1 in their 17 games since the Christmas break.

Welcome Back
Pats forward Drew Englot made his return to the lineup on Wednesday after missing six games because of appendicitis. The 17-year-old scored his 10th goal of the season in his return and has four goals in his last three games of the season. Englot, from Candiac, Saskatchewan was acquired from the Lethbridge Hurricanes this summer and leads all Pats rookies with his 10 goals and is tied with Zack Smith for the rookie lead in points with 13. Englot has put up two goals and two assists in four games against Swift Current this year.

New High
Pats forward Riley Krane set a new career high for goals in a season on Wednesday with his 13th in Saskatoon. The 19-year-old is also on a new career high for points in a season with 24. He entered Wednesday with 12 goals and 12 assists in 44 games, the same totals he had in his rookie year last year in 63 games. Krane has points in three straight entering Friday night, scoring two goals and adding two assists in that span. His 25 points this year is fifth in team scoring.

Last Pats Game
The Regina Pats made it three straight wins thanks to a 3-2 shootout victory on the road on Wednesday against the Saskatoon Blades. The Pats opened the scoring on their first shift of the game, 44 seconds in. Riley Krane snapped in his 13th from the right circle to make it 1-0. The Blades had a chance to tie it on a penalty shot a short time later, but Donovan Buskey made a nice pad save and Regina took the 1-0 lead to break. In the second, the Blades tied it on the powerplay 13 minutes in, but the Pats responded 1:22 later to take the lead back. Drew Englot scored his 10th on a shot into the top corner from the left circle to make it 2-1 and that was the score through 40 minutes. In the third, the Blades tied it at 3:34 thanks to Jayden Wiens and that forced overtime and eventually a shootout in a 2-2 contest. Carson Denomie and Zack Smith scored in the shootout for Regina, the Blades got one from Riley McKay and the Pats took the extra point in a 3-2 final.

Last Pats Game Vs Swift Current
January 4, 2020 – Robbie Holmes, Carson Denomie and Zach Wytinck each had three points in the Pats 5-4 shootout loss at home to the Broncos. Swift Current was led by Tyler Smithies and Garrett Sambrook who each had two points. Max Paddock made 22 saves for Regina, Reece Klassan 36 saves for the Broncos.