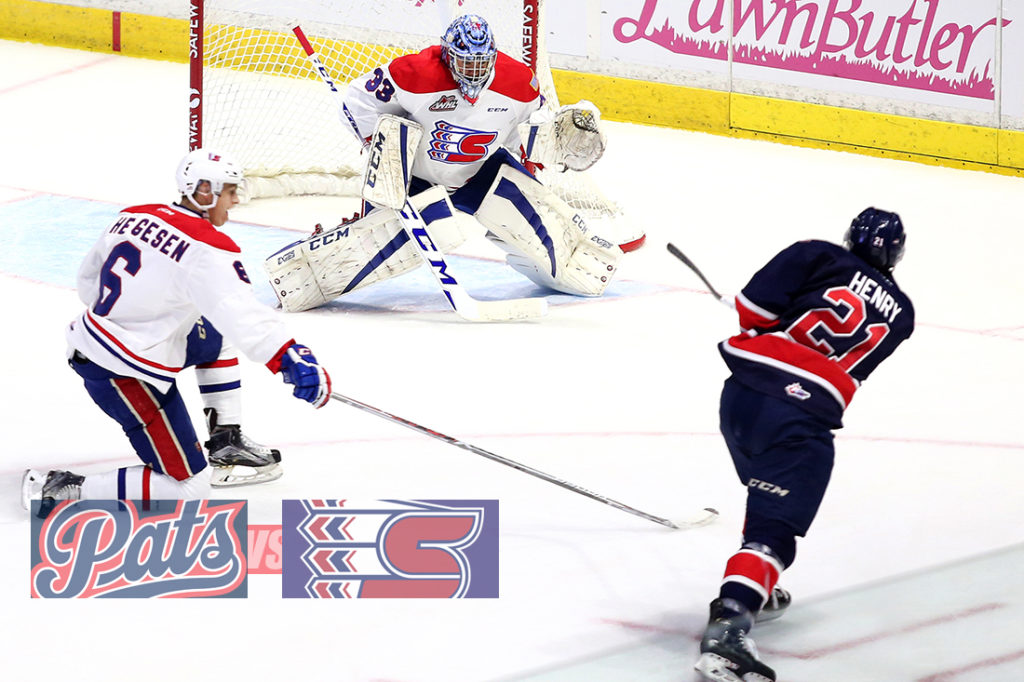 The Regina Pats (3-6-0-0) return home on Wednesday night to kick off a four game homestand against the Spokane Chiefs (5-2-0-2). Puck drop is at 7 p.m. at the Brandt Centre. The Pats are coming off a 4-3 overtime win in Calgary on Sunday and finished their road trip at 2-1-0-0. The Chiefs were in Brandon on Tuesday night and beat the Wheat Kins 6-4 on two goals late in the third period. This afternoon is the first and only meeting of the season between the Pats and Chiefs in 2018-19. Today’s game can be heard with Bennett Dunlop Ford Pats Hockey starting at 6:35 p.m. on 620 CKRM, the game will also be broadcast on Access 7.

The Lead Up: Pats conclude road trip with overtime win in Calgary
The Regina Pats picked up a second straight win on Sunday afternoon, 4-3 in overtime over the Calgary Hitmen. Riley Stotts got the scoring started for the Hitmen with his first of the year, a powerplay goal at 2:32 and it was 1-0. 34 second later, Cole Dubinsky stole a puck in the offensive zone, cut left and buried his first career WHL goal into the top corner to tie it 1-1 and that was the score at the break. The Hitmen took the lead again 11 seconds into the second, but Jake Leschyshyn picked up a powerplay goal at the 12-minute mark and it was 2-2 after 40 minutes. In the third, the Pats fell behind 3-2 on a powerplay goal from Kaden Elder. But once again, the Pats found a tying goal, this time from Aaron Hyman on the powerplay, his third of the year and the game needed overtime. 14 seconds into the extra frame, Jake Leschyshyn set up Nick Henry on a two on one and he scored his second to give the Pats the extra point in a 4-3 final. The Pats went two for six on the powerplay and the penalty kill was four for six. Nick Henry and Jake Leschyshyn led the offence with a goal and two assists each, while Max Paddock made 29 saves.

Paddock Rolling
Pats goaltender Max Paddock is playing his best hockey of the season in the last couple of weeks. The 18-year-old is coming off back to back road wins in Kootenay and Calgary where he gave up just five goals, stopping 58 of 63 shots on goal. The product of Brandon, Manitoba has put up a 2.75 goals against average in his last four starts, going 2-2-0-0 with a .914 save percentage. In his last four starts, his goals against average has dropped 2.21 and his save percentage has increased by over four per cent. Paddock was a 10th round pick in the 2015 WHL Bantam Draft and attended training camp with the San Jose Sharks this fall.

Dubinsky’s First
Pats rookie forward Cole Dubinsky picked up his first career WHL goal in the first period on Sunday in Calgary. The fourth-round pick in 2017 is playing in his 16-year-old season in the league but will not turn 16 until December 4. The product of Ardrossan, AB stole a puck in the offensive zone on Sunday and buried into the top corner to become the youngest player to score a goal in the WHL this season. Dubinsky has appeared in six games this season and has a goal and an assist. In five games last season, Dubinsky put up two assists and eight penalty minutes.

Henry’s Streak
Pats alternate captain Nick Henry carries a five-game point streak into tonight’s contest against the Chiefs. The Colorado Avalanche prospect has scored two goals and added six assists over the streak, twice putting up three points in a game. Henry has been held off the scoresheet just twice in nine games this year and leads the club with 12 points on the season. His 12 points are tied for 16th in league scoring and his 10 assists are tied for 10th.