PREVIEW: Pats kick off final week of the season Wednesday at home to Swift Current 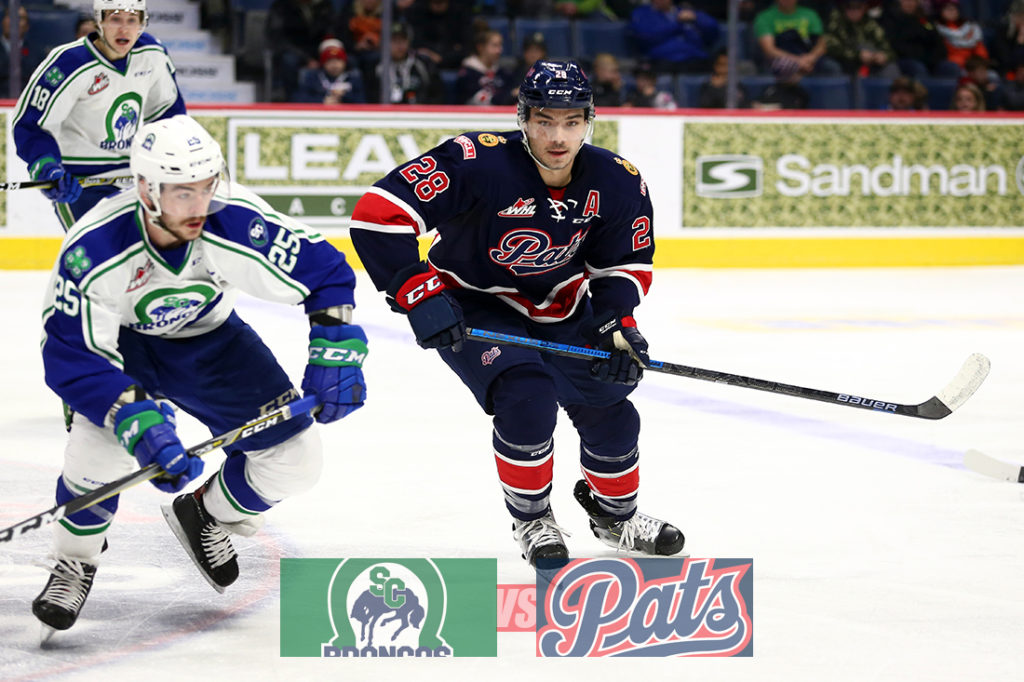 The Regina Pats (18-44-1-2) will play their second to last home game of the season on Wednesday night against the Swift Current Broncos (10-49-4-2). Puck drop is at 7:00 p.m. at the Brandt Centre. The Pats were last in action on Saturday in Moose Jaw, losing 6-1 to the Warriors. The Broncos last game was Sunday at home to Prince Albert where they were blanked 6-0 by the Raiders. Tonight is the sixth and final meeting between Regina and Swift Current in the 2018-19 season, the Pats are 3-2-0-0 in the season series. Tonight’s game can be heard with Bennett Dunlop Ford Pats Hockey starting at 6:35 p.m. on 620 CKRM and will also be broadcast on Access 7.

The Lead Up: Pats fall 6-1 in Moose Jaw Saturday
The Regina Pats finished their season series against the Moose Jaw Warriors on Saturday with a 6-1 road loss at Mosaic Place. In the first, the Warriors opened the scoring on the powerplay at 3:25 thanks to Justin Almeida. Then, at the 12-minute mark Brayden Tracey extended the Moose Jaw lead to two and that was the score after the opening period. In the second, the Warriors scored the lone goal at 11:46, Daniil Stepanov tipped one past Dean McNabb who was sensational in the period making 11 saves, but Regina trailed 3-0 after two. In the third, the Warriors made it 4-0 with a powerplay goal early on. The Pats got on the board halfway through the frame, Garrett Wright a great shot from the left circle into the top corner for his seventh and it was 4-1. The Warriors added an empty netter and an even strength marker after that and took the two points in a 6-1 final. The Pats were outshot 37-26, the powerplay was oh for three, the penalty kill four for six and Dean McNabb made 31 saves.

Wright’s Second Half
Pats rookie forward Garrett Wright scored his seventh goal of the season on Saturday night in Moose Jaw. The 17-year-old has enjoyed a strong second half of the season, scoring six goals and picking up an assist in 29 games since the Christmas Break. The product of Mesa, Arizona had a goal and two assists in his first 31 games, but more than doubled his production in the second half. Wright has scored four of his seven goals in his last 10 games and has five points in his last 12 contests.

Head to Head
The Pats are 3-2-0-0 against the Broncos this year, winning twice at home and once on the road in the season series. Regina has outscored Swift Current 18-11 in the first five meetings and outshot them 195-132. Regina has gone three for 20 on the powerplay against Swift Current and the penalty kill has gone 14 for 18 with a shorthanded goal. Austin Pratt leads the Pats with four goals and two assists in five games against the Broncos. Duncan Pierce has a goal and two assists, while Sergei Alkhimov and Riley Krane each have two goals. Max Paddock has gone 2-2-0-0 in the season series with a 1.52 goals against average, a .942 save percentage and one shutout. The Broncos are led by Tanner Nagel, who has a goal and two assists against Regina. Billy Sowa has put up three assists and Joona Kiviniemi has scored twice. Regina enters Wednesday night 13 points ahead of Swift Current in the Eastern Conference standings.