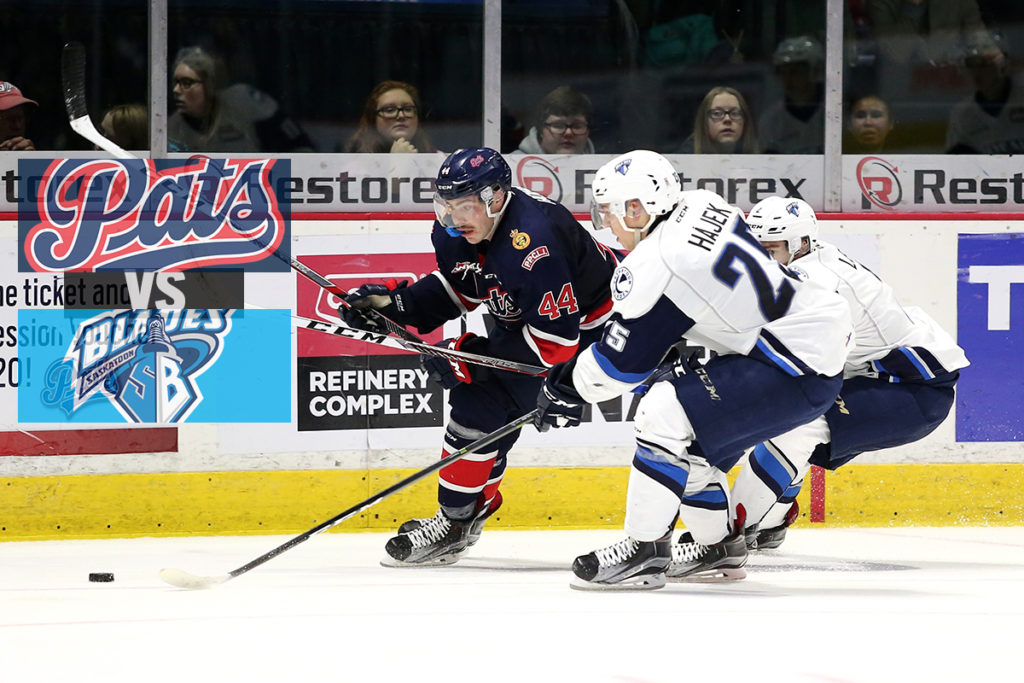 The Regina Pats (48-12-7-1) kick off the final week of the regular season tonight at home to the Saskatoon Blades (27-33-7-2). Puck drop is 7 p.m. at the Brandt Centre. The Pats were last in action on Saturday in Moose Jaw, winning a fourth straight game, 4-3 over the Warriors. The Blades were in Swift Current on Saturday and lost to the Broncos 3-2. The Pats carry a 4-0-1-0 record against Saskatoon into tonight’s sixth and final meeting of the season. The game can be heard on 620 CKRM with Bennett Dunlop Ford Pats Hockey beginning at 6:35 p.m.

Lead Up: Pats Win 4th Straight in Moose Jaw
The Regina Pats won their fourth straight game, 4-3 in Moose Jaw over the Warriors on Saturday night. The Pats scored twice in the first, Braydon Buziak picked up his 10th and Adam Brooks his 38th and it was 2-0 after one. Early in the second, Filip Ahl tipped home his 25th to make it 3-0 but the Warriors responded with two and trailed by just one heading to the third. Brooks scored his second of the night, 39th of the season to give the Pats the two goal lead back. Moose Jaw got it back to within a goal but Regina held on from there for the 4-3 win. Brooks scored twice and had an assist to lead the Pats offence. Moose Jaw outshot Regina 35-22 in the defeat, Tyler Brown made 32 saves in the Pats goal, Zach Sawchenko made 18 for the Warriors.

Head to Head
The Pats hold a 4-0-1-0 record against the Blades heading into tonight’s final meeting of the season. Regina has won once at home and three times on the road in the season series. The Pats have scored 21 goals to the Blades 12 in the season series. The Regina powerplay is 10 for 28 and the penalty kill 20 for 25. The Pats have outshot Saskatoon 188-130 in the five games. Adam Brooks leads Regina with three goals and six assists in the season series while Sam Steel has two goals and five assists and Nick Henry and Connor Hobbs each have five points. Saskatoon’s Braylon Shmyr has scored twice and has three assists against Regina. Michael Farren has four points and five others have two. The Pats enter Wednesday in first place in the WHL with 104 points while the Blades are three points behind Calgary for the final playoff spot in the Eastern Conference with 63 points.

Brown Named WHL Goalie of the Week
Pats goaltender Tyler Brown has been named the WHL Goaltender of the Week for the week ending March 12. The 19-year-old went 3-0-0-0 with a 1.67 goals-against average, .949 save percentage, 93 saves and one shutout. On Wednesday he stopped 35 of 37 shots in a 4-2 win at Swift Current and was named third star for his efforts. On Friday, Brown was perfect in turning aside all 26 shots sent his way in a 5-0 win versus Moose Jaw, earning second star honours. Finally, he blocked 32 of 35 shots on Saturday, in a 4-3 win at Moose Jaw and was named third star.