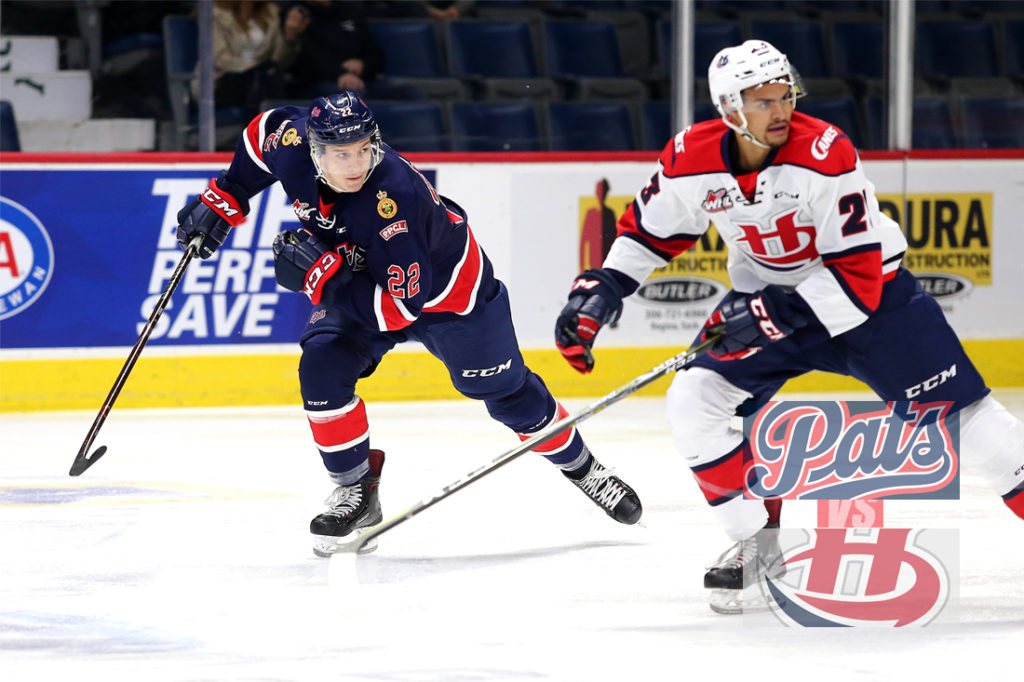 The Regina Pats (1-5-0-0) kick off a three-game road trip through the Central Division on Wednesday night against the Lethbridge Hurricanes (2-3-0-1). Puck drop is at 7 p.m. at the Enmax Centre. The Pats are coming off a 7-3 loss at home to the Brandon Wheat Kings on Saturday. Meanwhile, the Hurricanes fell 3-2 in a shootout on Saturday against the Saskatoon Blades. Tonight is the second of four meetings between the Pats and Hurricanes this season, Lethbridge took the first meeting 8-4. Tonight’s game can be heard with Bennett Dunlop Ford Pats Hockey starting at 6:35 p.m. on 620 CKRM.

The Lead Up: Pats fall at home to Brandon Saturday
The Regina Pats fell 7-3 to the Brandon Wheat Kings on Saturday night at the Brandt Centre. The Pats came out strong in the first, outshooting the Wheat Kings 17-10, but gave up a powerplay goal with less than a second left in the frame and trailed 1-0 at the break. Brandon extended the lead to 2-0 early in the second thanks to Jonny Hooker at 2:34. Austin Pratt responded for the Pats, his third of the season and it was a 2-1 game. The Wheat Kings came back with four unanswered and led 6-1 at the intermission. The Pats got goals from Nick Henry and Scott Mahovlich, both their firsts of the season in the third but fell 7-3. The Pats were oh for three on the powerplay and the penalty kill went six for eight, while Dean McNabb and Carter Woodside combined to make 27 saves.

Head to Head
Tonight is the second of four meetings between the Pats and Hurricanes, Lethbridge took the first meeting at the Brandt Centre on September 28, 8-4. The Pats were led by Jake Leschyshyn, Nick Henry, Aaron Hyman and Sergei Alkhimov who each put up two points in the defeat. The Hurricanes Dylan Cozens and Jordy Bellerive each put up four points in the contest. Regina is three for five on the powerplay in the season series and the penalty kill is six for nine with a shorthanded goal.

Pratt Rolling
Pats 19-year-old forward Austin Pratt found his offensive touch in two games over the weekend. The product of Lakeville, Minnesota scored twice and added an assist in the club’s 6-5 win in Swift Current on Friday and followed that up with a goal in the loss Saturday to Brandon. Pratt is up to three goals and five points through six games and has surpassed his point totals from last year with Regina, where he had four assists in 21 games. His five points are fourth most on the team, behind Aaron Hyman (7 points), Nick Henry (7 points) and Jake Leschyshyn (6 points).