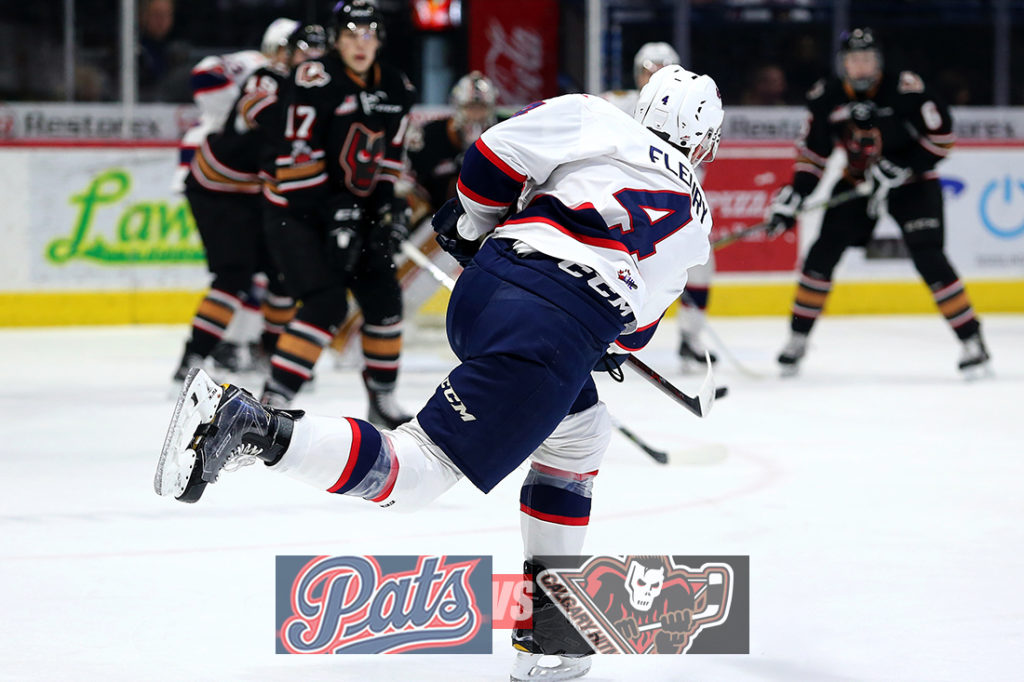 The Regina Pats (33-25-5-1) kick off a five game stretch on the road in the Central Division on Saturday against the Calgary Hitmen (19-35-6-3). Puck drop is at 8 p.m. Regina time at Scotiabank Saddledome. The Pats were in Moose Jaw last Saturday and saw their four game win streak come to an end in a 3-2 loss to the Warriors. The Hitmen were last in action on Friday night in Edmonton and fell 4-3 in overtime. Tonight is the fourth and final meeting on the season between the Pats and Hitmen, Regina holds a 3-0-0-0 record in the season series. The game can be heard starting at 7:35 with Bennett Dunlop Ford Pats Hockey on 620 CKRM.

The Lead Up: Pats drop tight one in Moose Jaw
The Regina Pats dropped a tight 3-2 game in Moose Jaw Saturday night to the Warriors. Moose Jaw scored the first two goals of the game in the opening period thanks to Tristin Langan and Justin Almeida to lead 2-0 at the break. In the second, Moose Jaw extended the lead to 3-0 when Jayden Halbgewachs put home a back door feed but, Jesse Gabrielle got that one back with his 11th late in the frame and it was 3-1 after 40 minutes. In the final stanza, Robbie Holmes picked up his 15th after a nice cross ice feed from Koby Morrisseau to get the Pats within a goal but the Warriors held on from there for the 3-2 win.

Head to Head
Tonight is the fourth and final meeting between the Pats and Hitmen, Regina is 3-0-0-0 in the season series. The Pats have outscored Calgary 16-6 in the three games, the powerplay has gone two for 11 and the penalty kill 10 for 14. Josh Mahura leads the Pats with two goals and four assists against the Hitmen. Sam Steel has five points in the season series while seven others have three points. Calgary’s Vladislav Yeryomenko leads the team with four points against Regina. Carson Focht and Luke Coleman each have put up three points.

Post-Christmas Success
The Pats have turned the corner since returning from the Christmas break in December. In 28 games since the break, the club has gone 17-8-2-1. In those 28 games, Regina has scored 98 goals in that stretch for an average of 3.5 goals per-game. Captain Sam Steel has played in 20 of the 28 games and leads the club with 36 points in that stretch. Cameron Hebig and Josh Mahura are next with 33 points since Christmas while Matt Bradley has put up 30 points.

Hebig Hits 40
Pats forward and Edmonton Oilers prospect Cameron Hebig hit the 40 goal mark for the first time in his career over the weekend. The 20-year-old from Saskatoon leads the team with those 40 goals and his 82 points. In 20 games since being acquired from the Saskatoon Blades, Hebig has scored 10 times and has 14 assists for 24 points. For his career, Hebig has played in 259 games, scoring 97 goals and adding 120 assists for 217 points.