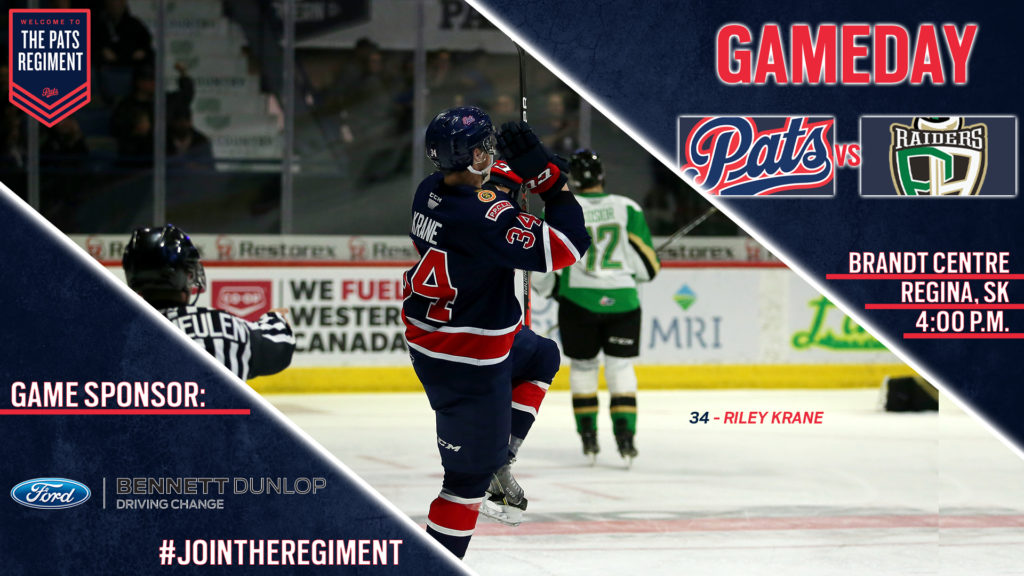 The Regina Pats (10-19-3-1) kick off the 2020 calendar year with a New Year’s Day game Wednesday against the Prince Albert Raiders (20-12-3-1). Puck drop is at 4:00 p.m. at the Brandt Centre. The Pats are coming off a 4-1 loss in Brandon on Monday and are 2-1-0 since the break. The Raiders lost at home to Winnipeg, 3-2 on Monday and have dropped five straight games. Today is the fifth of six meetings between Regina and Prince Albert this year, the Pats are 1-3-0-0 so far in the season series. The game can be heard with Bennett Dunlop Ford Pats Hockey starting at 3:35 p.m. on 620 CKRM.

Quick Facts
– The Pats will meet the Raiders for the fifth time today, going 1-3-0-0 to start the year against Prince Albert.
– Logan Nijhoff has three goals in four games against Prince Albert this season.
– Austin Pratt and Robbie Holmes lead Regina with seven career points against Prince Albert.
– The Pats are 7-5-1-1 in their last 14 games.
– The Pats penalty kill has gone 18 for 18 in three games since the Christmas Break.
– Max Paddock is 6-4-1-1 in his last 12 games, with a 2.57 GAA and a .932 save percentage and two shutouts.
– Austin Pratt is fourth in the WHL with 151 shots on goal.
– Riley Krane will play in his 100th career Western Hockey League game today.

Dubinsky’s Good Start
Pats second year forward Cole Dubinsky is off to a good start to the second half of the season. The 17-year-old has a goal and an assist in three games since the break. He picked up an assist in Moose Jaw on Friday and scored the Pats lone goal in the third period in Brandon on Monday. He is up to two goals and eight points on the season.

PK Success
The Pats penalty kill has been solid in the first three games since the break, going four for four, six for six and eight for eight in that span, 18 for 18 overall with a shorthanded goal. The last powerplay goal the Pats conceded was on December 15 against Winnipeg in the second period. The Pats penalty kill is up to eighth in the WHL at 81.5 per cent. Regina has killed 123 of 151 shorthanded situations this year.

Last Pats Game
The Regina Pats dropped their first game of the second half on Monday, 4-1 in Brandon at the hands of the Wheat Kings.
In the first, the Pats outshot the Wheat Kings 8-2 to start the game but did not score. Brandon would find the first goal of the contest at the 14:03 mark, Ben McCartney jammed one in and it was 1-0 Wheat Kings after one. In the second, Brandon went up 2-0 on a four on four goal from Ridley Greig and took that lead to the second intermission. In the third, the Pats got to within one on a beautiful goal from Cole Dubinsky, his second, 1:57 into the period and it was 2-1. Brandon restored the two-goal lead just over a minute later thanks to Ty Thorpe. 57 seconds after that, Luka Burzan made it 4-1 at the 4:11 mark and that was the final.The Pats outshot the Wheat Kings 35-33, the powerplay was oh for five, the penalty kill eight for eight and Max Paddock made 29 saves.

Last Pats Game Vs Prince Albert
November 16, 2019 – Carter Chorney, Logan Nijhoff and Ty Kolle scored in regulation and the Pats skated away with a 4-3 shootout win over Prince Albert at the Brandt Centre. Kaiden Guhle, Aliaksei Protas and Reece Vitelli scored for P.A. Max Paddock made 33 saves for Regina, Boston Bilous had 24 for the Raiders.