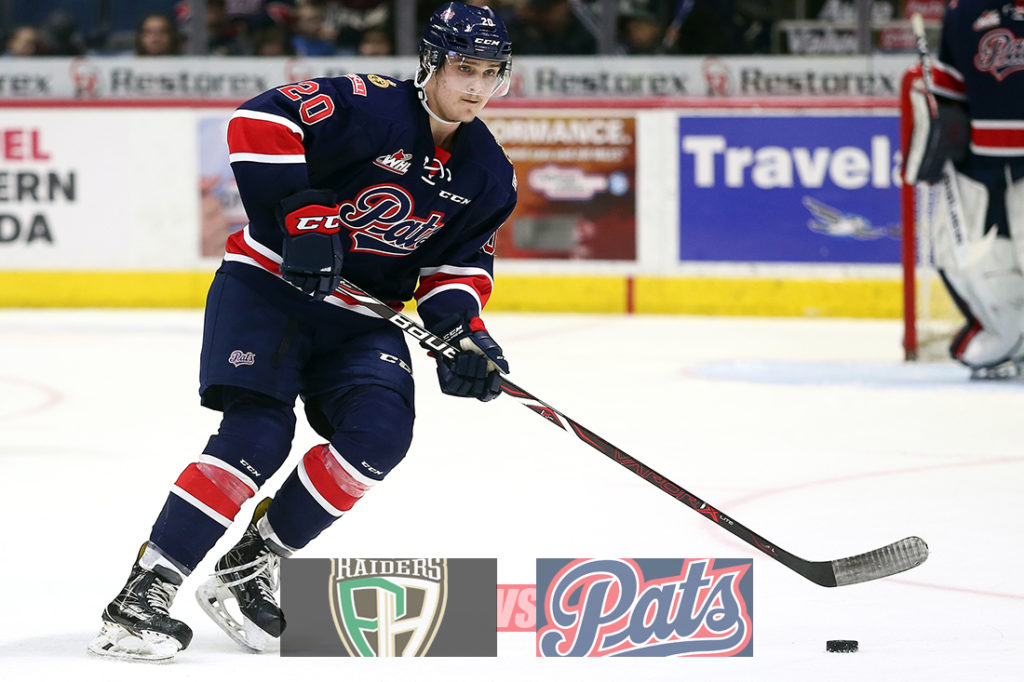 The Regina Pats (12-24-0-1) will kick off 2019 on home ice Tuesday against the Prince Albert Raiders (33-3-1-0). Puck drop is at 4:00 p.m. at the Brandt Centre. The Pats extended their win streak to three games on Sunday when Dean McNabb made 43 saves to lead Regina to a 2-1 win in Prince Albert. Tonight is the sixth and final meeting between Regina and Prince Albert, the Pats are 1-4-0-0 so far in the season series. Tonight’s game can be heard with Bennett Dunlop Ford Pats Hockey starting at 3:35 p.m. on 620 CKRM.

The Lead Up: Dean McNabb Leads Pats to victory in P.A. Sunday
Dean McNabb made 43 saves to lead the Pats to a third straight win on Sunday, 2-1 in Prince Albert over the Raiders. The Pats got off to a great start with a goal 18 seconds in, Logan Nijhoff cleaned up a loose puck in front for his third of the year to make it 1-0. They extended the lead to 2-0 when Liam Schioler hammered a slap shot from the left circle, off the top corner post and in for his second at the 8:01 mark. The Raiders got one back from Noah Gregor at 12:37 and Regina led 2-1 after one. The Raiders outshot the Pats 13-4 in the second period, but Dean McNabb was solid, stopping all 13 shots and the Pats stayed ahead by one going to the third. In the final frame, McNabb continued his brilliance, making 17 saves and Regina held on for the 2-1 victory. The Pats were outshot 44-13, the powerplay was oh for two, the penalty kill seven for seven and Dean McNabb made 43 saves in a first star performance.

McNabb named WHL Goalie of the Week
The WHL League announced Monday that Dean McNabb is the WHL Eli Wilson Goaltending Goaltender of the Week and league nominee for the Vaughn CHL Goaltender of the Week for the week ending December 30. McNabb made his single appearance between the pipes count as he stopped 43 of 44 shots in a 2-1 win over the Prince Albert Raiders, giving him a 1-0-0-0 record, 1.00 goals-against-average, and a 0.977 save percentage. The win also brought an end to the 17-game home winning streak of the WHL and Canadian Hockey League’s top team. The Davidson, SK. product stopped 13 of 14 shots in the first period, then turned aside 13 and 17 shots over the next two periods respectively. The 43-save performance marked a career-high.

Nijhoff Finding his touch
Pats forward Logan Nijhoff is off to a good start in the second half of the season. The 17-year-old has goals in consecutive games with eight shots on goal in that stretch. From Comox, B.C, Nijhoff has two goals and an assist in last four games to reach 11 points on the season, surpassing his total of six points last year in 30 games.

Penalty Kill Rolling
The Pats penalty kill has been solid since returning from the Christmas break, going 14 for 15 for a 93.3 per cent success rate. For the season, the Pats are up to 72.9 per cent which is 20th in the WHL. Regina has given up just six powerplay goals in their last nine games.