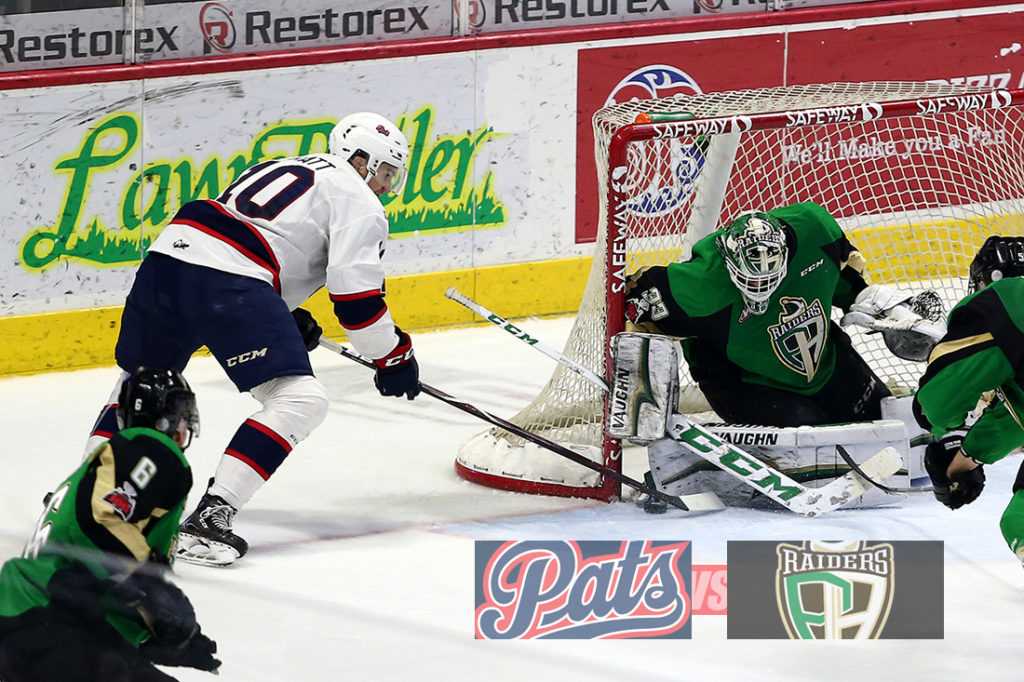 The Regina Pats (0-0-0-0) will kick off the 2018-19 regular season on Friday night on the road against the Prince Albert Raiders (0-0-0-0). Puck drop is at 7 p.m. at the Art Hauser Centre. The Pats finished the 2018 preseason with a 3-3-0-0 record, their most recent game was a 5-2 loss to the Raiders at the Brandt Centre on Saturday. Prince Albert went 2-2-0-1 in the preseason, winning their last two contests over Regina and Saskatoon. Tonight is the first of six meetings between the Pats and Raiders, the two clubs will meet again Saturday in the Pats home opener at the Brandt Centre. Tonight’s game can be heard with Bennett Dunlop Ford Pats Hockey starting at 6:35 p.m. on 620 CKRM2 via 620ckrm.com.

The Lead Up: Pats lose preseason finale to Prince Albert
The Regina Pats concluded the 2018 WHL preseason with a 5-2 loss at home to the Prince Albert Raiders last Friday night. Regina finished the preseason with a 3-3-0-0 record. In the first period, the Raiders got goals from Justin Nachbaur and Brett Leason and led 2-0 at the break. In the second, Nachbaur scored again to make it 3-0 Raiders, but Regina drew to within one after two goals from Logan Nijhoff. Sean Montgomery got one back for Prince Albert late in the frame and it was 4-2 Raiders after two. In the third, Carson Miller scored on the powerplay to make it 5-2 Prince Albert and that was the final score. The Pats were oh for four on the powerplay and the penalty kill went two for five. Logan Nijhoff led the offence with two goals and Kyle Dumba made 20 saves in the defeat.

Winning Streak
The Pats carry a 15-game win streak over the Raiders into Friday’s season opener. Regina won the last seven meetings of the 2016-17 season and all eight matchups in 2017-18. The last loss was opening night in 2016, 4-3 in overtime. In those 15 games, the Pats have outscored the Raiders 78-45. Jake Leschyshyn has 17 points against Prince Albert in the last two seasons, Nick Henry has 13 points.

NHL Guys Return
The Regina Pats have four of their five NHL Camp attendees back and ready for night one of the regular season. Forwards Robbie Holmes and Nick Henry are back from Colorado Avalanche camp, forward Jake Leschyshyn returned from the Vegas Golden Knights and goaltender Max Paddock from the San Jose Sharks. Just defenceman Cale Fleury remains with the Montreal Canadiens.

Sedov led the way
Pats rookie defenceman Nikita Sedov enjoyed a successful preseason, leading the Pats in scoring with seven points in five games. The 17-year-old out of Tyumen, Russia was held pointless in his first preseason game, but scored twice and added five assists in the next four games. His seven points was first among all defenceman, tied second among all rookies and tied for seventh in overall preseason scoring.