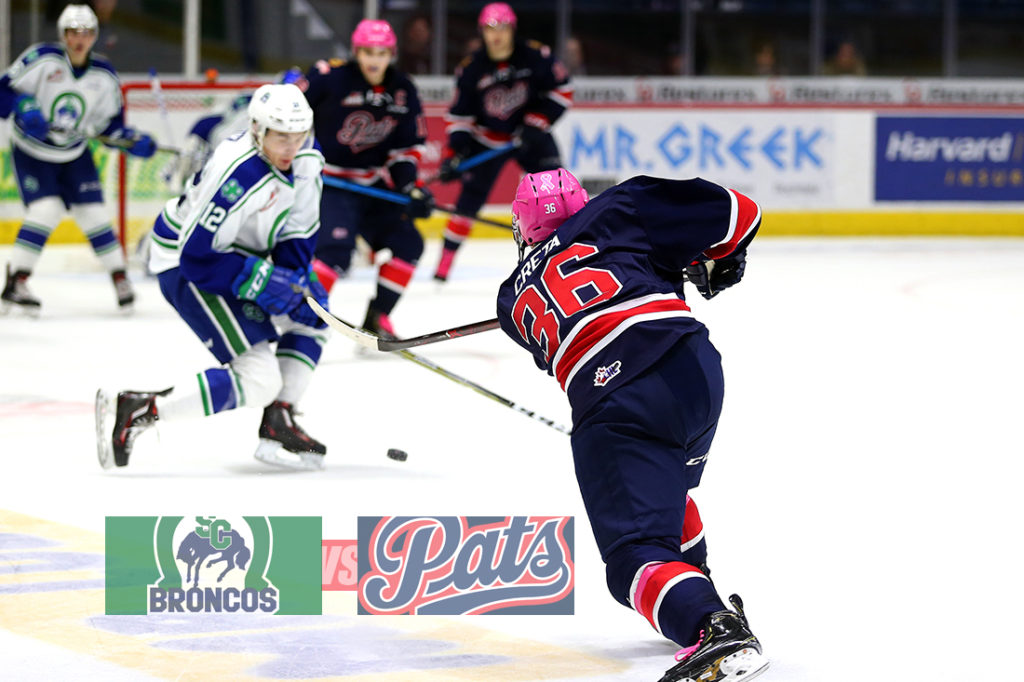 The Regina Pats (6-12-0-0) wrap up their five-game home stand Saturday night against the Swift Current Broncos (3-15-0-1). Puck drop is at 7 p.m. at the Brandt Centre. The Pats won a second straight game last night on home ice, 5-1 over the Tri-City Americans. The Broncos were in Prince Albert last night and fell 6-2 at the hands of the Raiders. Tonight is the third of six meetings between the Pats and Broncos in 2018-19. Tonight’s game can be heard with Bennett Dunlop Ford Pats Hockey starting at 6:35 p.m. on 620 CKRM.

The Lead Up: Pats get Max effort in 5-1 win over Tri-City Friday
The Regina Pats got a hat trick from Jake Leschyshyn, four assists from Nick Henry and 39 saves from Max Paddock in a 5-1 win over the Tri-City Americans on Friday night at the Brandt Centre. The Pats got the scoring started 30 seconds into the game, Austin Pratt scored on a seeing eye shot from the right circle into the top corner short side for his ninth of the campaign. Two minutes after that, Jake Leschsyhyn scored a powerplay goal, his 10th of the year, and it was 2-0 after 20 minutes. The Pats added to their lead at 13:28 of the second when Marco Creta found a puck in the slot and ripped home his first of the season to make it 3-0. Jake Leschyshyn then made it 4-0, two minutes after that with his second of the night and 11th of the season. The Americans got one back late in the frame on the powerplay and it was 4-1 after two periods. In the third, Jake Leschyshyn completed his hat trick with a goal on the five on three powerplay, his team leading 12th to make it 5-1 and that was the final score. The Pats were outshot 40-33, the powerplay was two for five and the penalty kill seven for eight.

Head to Head
The Pats are 2-0-0-0 against Swift Current so far in 2018-19, winning once at home and once on the road. The Pats have outscored the Broncos 13-6 in the two games with the powerplay going three for 10 (30%) and the penalty kill seven for 10 (70%). Aaron Hyman leads the way with six assists in the season series, while Austin Pratt and Nick Henry each have five points. The Broncos are led by Alec Zawatsky, Andrew Fyten, Matthew Culling and Billy Sowa who each have two points against Regina.

Pats Debut
Defenceman Kyle Walker played in his first game with the Pats on Friday against Tri-City. The 18-year-old was acquired on Thursday from the Everett Silvertips for a fifth-round pick in 2019. The product of Leduc, Alberta went plus-two in his debut and had one shot on goal.

Creta on the Board
Pats defenceman Marco Creta scored his first goal of the season on Friday against the Americans. The 18-year-old is up to a goal and five assists in 14 games this year. The native of Oak Bluff, Manitoba has recorded a point in five of his last six games, with a goal and four assists in that stretch. Creta was listed and signed in training camp in 2017, he has appeared in 47 games over the last two seasons, scoring twice and adding nine assists. His six points this year is already a career high.