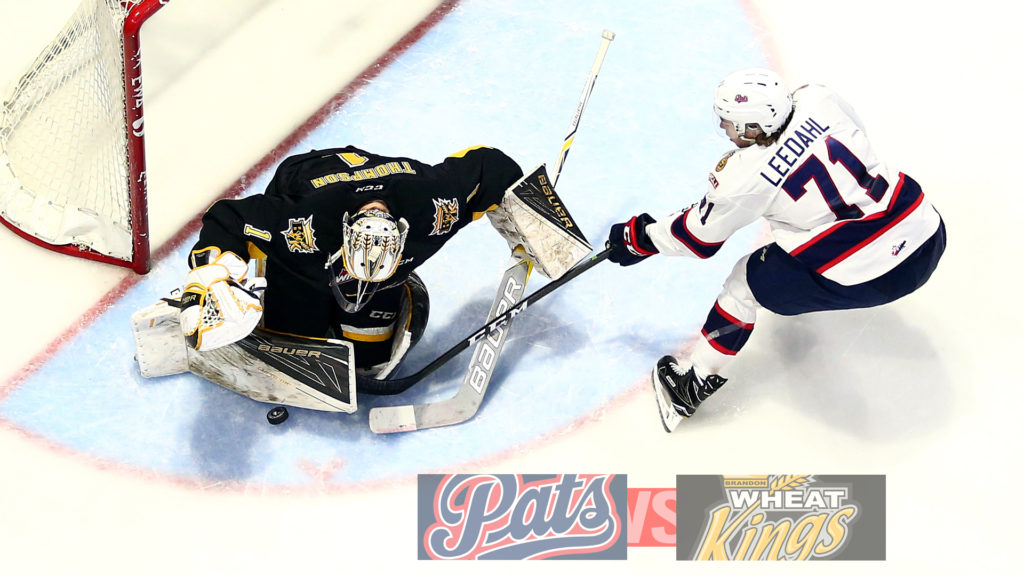 The Regina Pats (50-12-7-1) play their final home game of the regular season tonight against the Brandon Wheat Kings (31-29-7-3). Puck drop is 7 p.m. at the Brandt Centre. The Pats were last in action on Wednesday against the Swift Current Broncos, winning 6-2. The Wheat Kings won their last game, 3-1 in Moose Jaw on Wednesday night. The Pats carry a 4-1-0-1 record against Brandon into tonight’s seventh of eight meetings on the season. The game can be heard on 620 CKRM with Bennett Dunlop Ford Pats Hockey beginning at 6:35 p.m. The game will also be broadcast on Access 7.

Lead Up: Pats Win 50th Game Wednesday
The Regina Pats made history on Wednesday night, winning their 50th game of the season for the first time ever, 6-2 over the Swift Current Broncos. Adam Brooks, Dawson Leedahl and Sergey Zborovskiy all scored in the first to give Regina the 3-0 lead. The Pats added two on the powerplay in the second and another in the third to take the two points and improve to 50-12-7-1 on the season. Adam Brooks, Dawson Leedahl and Sam Steel each had three point nights in the win while Jordan Hollett made 24 saves for his 14th victory in goal.

Head to Head
The Pats are 4-1-0-1 against Brandon this season with three wins coming at the Brandt Centre, one win and two losses in Brandon. The Pats have scored 25 goals to the Wheat Kings 17 in the first six matchups. The Pats have outshot Brandon 260-188 in the six games, the powerplay has gone 10 for 30 and the penalty kill 27 for 32. Sam Steel and Adam Brooks lead the Pats with 12 points against the Wheat Kings. Connor Hobbs has nine and Dawson Leedahl six in the season series. Goaltender Tyler Brown is 3-0-0-1 in four starts and holds a 2.20 goals against average and a .930 save percentage. Tyler Coulter leads the Wheat Kings with five goals and two assists against Regina. Stelio Mattheos and Connor Gutenberg each have six points. Goaltender Logan Thompson is 2-2-0-0 with a 2.95 GAA and a .936 save percentage.

50 Wins
The Pats set a franchise record on Wednesday night with their 50th win of the season. The previous record of 49 was set in 1980-81 when the team went 49-21-2. In the three seasons following 80/81, the franchise won 48 games in each of those years. At 50-12-7-1 entering the final weekend of the regular season, the Pats have also set a franchise record for 108 points in the standings as well as road wins with 27.

Hobbs Ties Franchise Record
Pats defenceman Connor Hobbs has written his name into the Pats record books. On Wednesday night, the Washington Capitals prospect scored his 30th goal, tying him with John Miner (1984-85) for most goals by a defenceman in one season. Hobbs has two games remaining to break the record. The Saskatoon product currently leads all WHL defencemen with 30 goals and 82 points in 62 games.