PREVIEW: Pats host Wheat Kings in back half of home and home set Friday 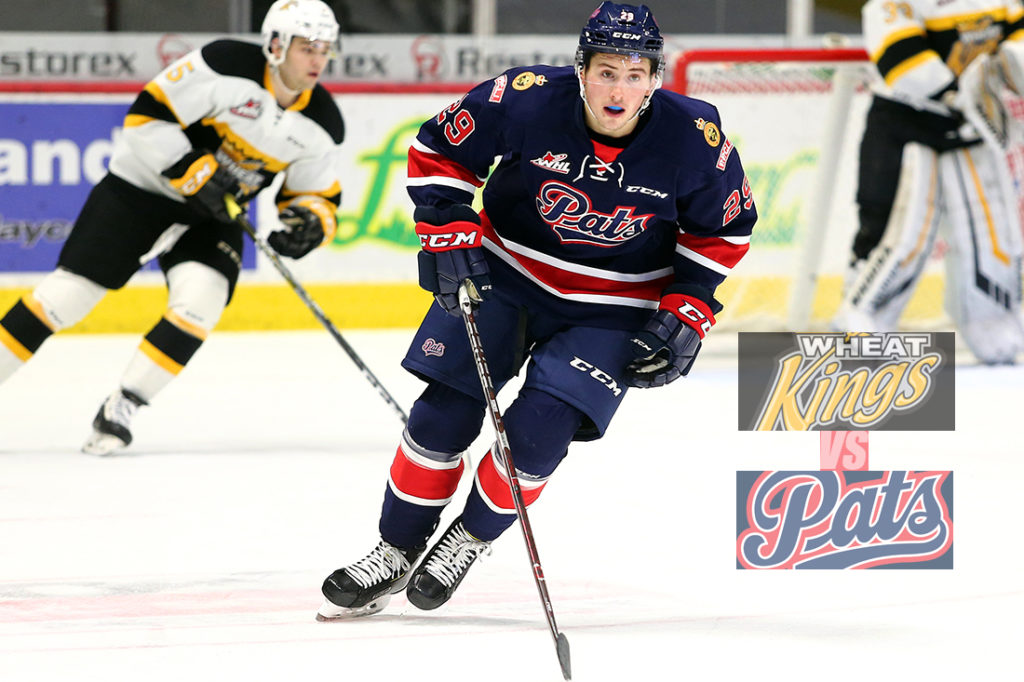 The Regina Pats (10-24-0-1) return to home ice on Friday night for the back half of a home and home with the Brandon Wheat Kings (15-11-3-3). Puck drop is at 7:00 p.m. at the Brandt Centre. The Pats took the first meeting last night, 3-2 in Brandon, scoring twice in the first and once in the third. Tonight is the fourth of eight meetings between Regina and Brandon, the Pats are 1-2-0-0 so far in the season series. Tonight’s game can be heard with Bennett Dunlop Ford Pats Hockey starting at 6:35 p.m. on 620 CKRM.

The Lead Up: Pats start second half with 3-2 win in Brandon
Sergei Alkhimov scored twice, including the game winner, to lead the Regina Pats past the Wheat Kings in Brandon 3-2 on Thursday night. The Pats got off to a good start with a five on three powerplay goal at the 3:29 mark of the first. Ty Kolle set up Robbie Holmes back door for his seventh of the year to make it a 1-0 game. The Pats added to the lead with another powerplay goal from Sergei Alkhimov, his eighth, and it was 2-0 Regina after 20 minutes. In the second, the Wheat Kings ate into the lead with a powerplay goal of their own. Ridley Greig scored from the right goal line and the Pats lead was 2-1 after two periods. In the third, the Pats went up 3-1 when Sergei Alkhimov buried a rebound for his second of the night, ninth of the year, early on in the frame. The Wheat Kings got one back with nine minutes left but Regina held on for the 3-2 victory. The Pats were outshot 23-22, the powerplay was two for six and the penalty kill went five for six. Sergei Alkhimov led the offence with two goals and Max Paddock made 21 saves in the win.

Powerplay Finding Success
The Pats powerplay has turned a bit of a corner in the last two games going four for 12. Going into their final game before the Christmas break, the Pats powerplay was mired in a stretch of oh for 18 in their previous six games. They then went two for six in Moose Jaw and two for six again Thursday night in Brandon. Robbie Holmes has two goals on the powerplay in the last two games, while Austin Pratt and Sergei Alkhimov have the others. For the season, Regina has scored 25 powerplay goals in 35 games.

Alkhimov Scoring Touch
Pats forward Sergei Alkhimov scored his eighth and ninth goals of his rookie season on Thursday in Brandon. The 17-year-old continued a strong stretch where he has five goals in his last eight games and has increased his point total to 14 in 34 games this year. He is tied for 18th among all WHL rookies with his 14 points and his nine goals is tied for third.