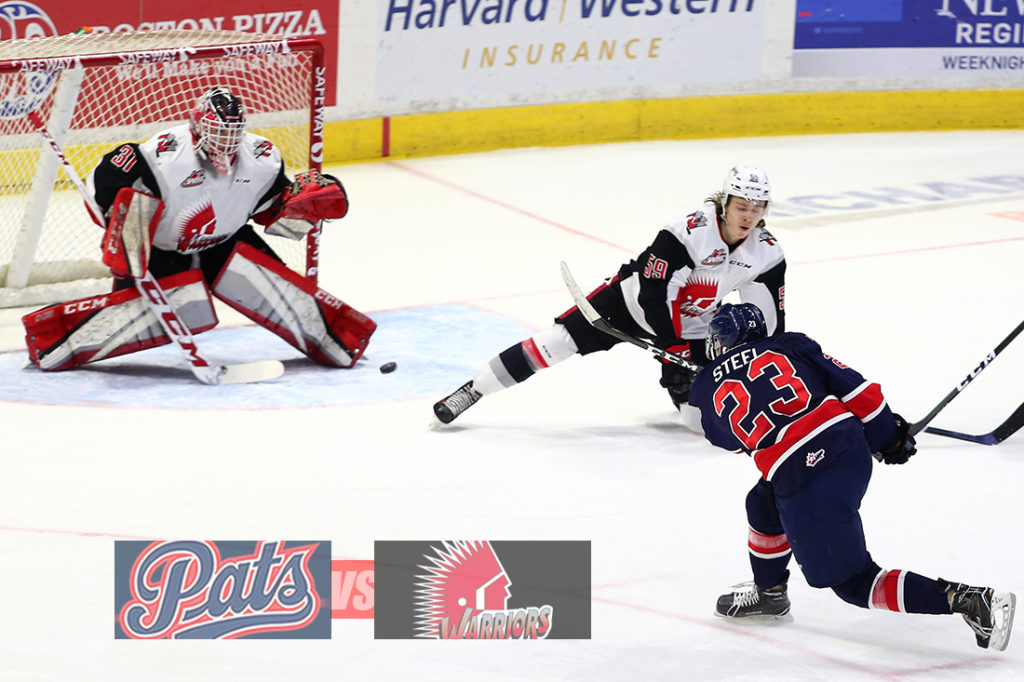 The Regina Pats (11-6-2-0) ride a three game winning streak into Friday night when they host the East Division leading Moose Jaw Warriors (13-4-0-0). Puck drop is at 7:00 p.m. at the Brandt Centre. The Pats are coming off a 4-3 win over the Red Deer Rebels last Friday. The Warriors were last in action on Saturday and won their third straight, 3-2 in Prince Albert. Tonight is the second of eight meetings between the two clubs in 2017-18, the Warriors took the first meeting in OT in late September. The game can be heard starting at 6:35 with Bennett Dunlop Ford Pats Hockey on 620 CKRM.

The Lead Up: Pats come back to beat Rebels Friday
The Regina Pats won their third straight game on Friday night, 4-3 over the Red Deer Rebels at the Brandt Centre. The Rebels scored twice in the opening 17 minutes of the first period but Regina responded when Josh Mahura burned up the left wing and buried his sixth of the year to get the Pats to within a goal before the end of the period. Jack Flaman restored the two goal lead for Red Deer early in the frame, making it 3-1, but the Pats powerplay would respond. First, Jonathan Smart potted his second of the season and then Josh Mahura hammered home his second of the night, seventh of the year, to tie the game 3-3 heading to the third. The game stayed tied until the 9:44 mark, Matt Bradley scored from his knees at the left goal line for his team leading 14th and that stood up as the winner in a 4-3 final. Regina outshot Red Deer 48-28, the powerplay was three for seven and the penalty kill four for four. Josh Mahura, Jonathan Smart and Wyatt Sloboshan each had two point nights while Tyler Brown made 25 saves for his eighth win.

Head to Head.
The Pats are 0-0-1-0 against the Warriors so far this season, the lone previous meeting coming in Moose Jaw on September 29, where Regina fell 5-4 in overtime. Sam Steel had a goal and two assists for the Pats, Josh Mahura chipped in with three assists and Emil Oksanen scored twice. The Warriors Oleg Sosunov, Jayden Halbgewachs, Noah Gregor and Brayden Burke each had two points in the win. The Pats enter Friday two points back of the Warriors for first in the East Division, Moose Jaw holds two games in hand.

Welcome Back Hank
Pats forward and Colorado Avalanche prospect Nick Henry will make his season debut on Friday night when the Moose Jaw Warriors visit the Brandt Centre. Henry missed the first 19 games of the season, recovering from off-season shoulder surgery. Henry finished second among all WHL rookies last season with 35 goals and 81 points in 72 regular season games. The 18-year-old was subsequently drafted in the fourth round of the 2017 NHL Entry Draft by the Colorado Avalanche.

Canada Russia Series
Three Pats players took part in the 2017 CIBC Canada Russia Series in Moose Jaw and Swift Current earlier this week. Sam Steel, Josh Mahura and Jake Leschyshyn all suited up for Team WHL against Team Russia. Steel picked up four assists in the two games, Mahura played in just one contest and had an assist while Leschyshyn was held pointless in his one game played. John Paddock served as an assistant coach for Team WHL and Greg Mayer as an Athletic Therapist for the two games.