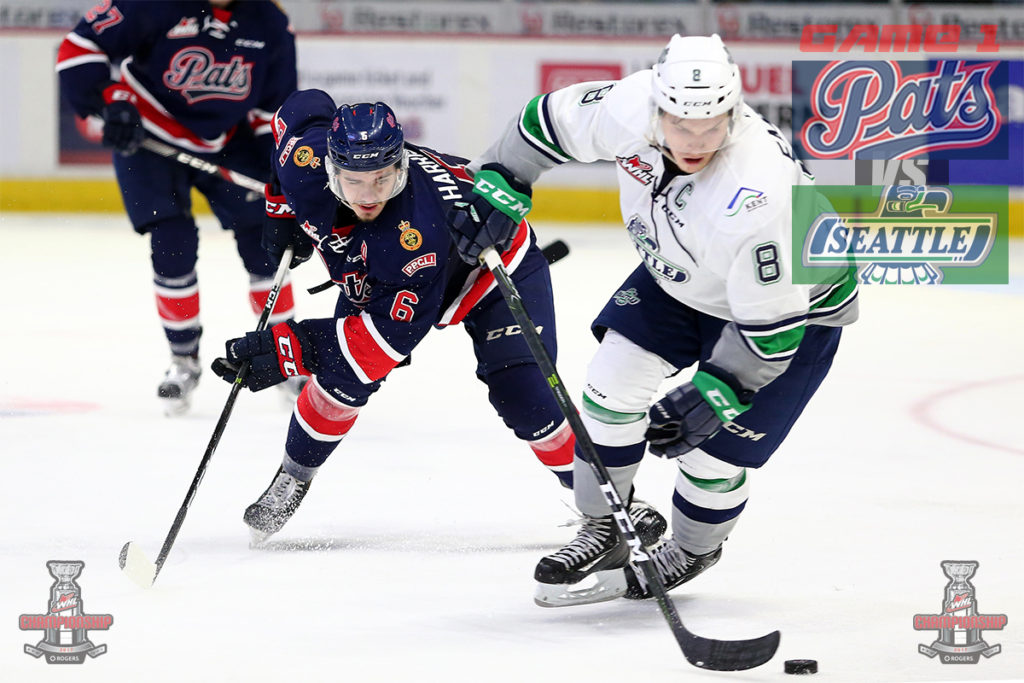 The Regina Pats (12-5) kick off the WHL Championship Series, presented by Rogers, tonight at home to the Seattle Thunderbirds (12-2). Puck drop at the Brandt Centre is 7 p.m. The Pats won the Eastern Conference Championship on Sunday in Lethbridge with a 7-4 win over the Hurricanes in game six. The Thunderbirds won the Western Conference Championship on Sunday as well with a 3-1 win in game six over the Kelowna Rockets. The game can be heard on 620 CKRM with Bennett Dunlop Ford Pats Hockey beginning at 6:35 p.m. It will also be broadcast on the WHL on Shaw and Access 7.

Lead Up: Pats Win Eastern Conference Championship Sunday
The Regina Pats overcame a 3-0 first period deficit to win the Eastern Conference Championship Series with a 7-4 victory in game six over the Lethbridge Hurricanes. The Pats got goals from Robbie Holmes and Jeff de Wit to get within a goal after 20 minutes. Lethbridge got it to 4 -2 early in the second but Regina tied it up 4-4 after goals from Filip Ahl and Nick Henry. In the third, Jeff de Wit scored the eventual game winner eight minutes in, Austin Wagner and Wyatt Sloboshan would score after that to make it 7-4 and that was the final score. The Pats outshot Lethbridge 45-28, Tyler Brown made 24 saves for Regina, Stuart Skinner 38 for Lethbridge.

Head to Head
The Pats and Thunderbirds lone meeting of the regular season was played way back on October 30, just the 13th game of the regular season for Regina. The Pats came away with a 6-3 victory. The shots on goal were 29-29, the Regina powerplay was two for five and the penalty kill was two for five as well. Dawson Leedahl led the way with a goal and two assists while Adam Brooks, Sam Steel and Connor Hobbs each had a goal and a helper. Tyler Brown stopped 26 shots in the victory. The Thunderbirds got a goal and two assists from defenceman Ethan Bear in the contest while Sami Moilanen scored once and had an assist as well. Goaltender Rylan Toth made 23 saves in the defeat.

Brooks and Brown Get League Honours
Tyler Brown was named WHL Goalie of the Month for April on Monday afternoon. The 19-year-old went 8-5 in the month with a 2.30 G.A.A. and a .921 SV%. On the same afternoon, Captain Adam Brooks was named WHL Player of the Week. He had a goal and seven assists for eight points, leading the Pats to a three and one record. Brown holds a 2.13 GAA for the playoffs and a .926 SV%. Brooks is tied for 12th in scoring with 18 points in 15 games.