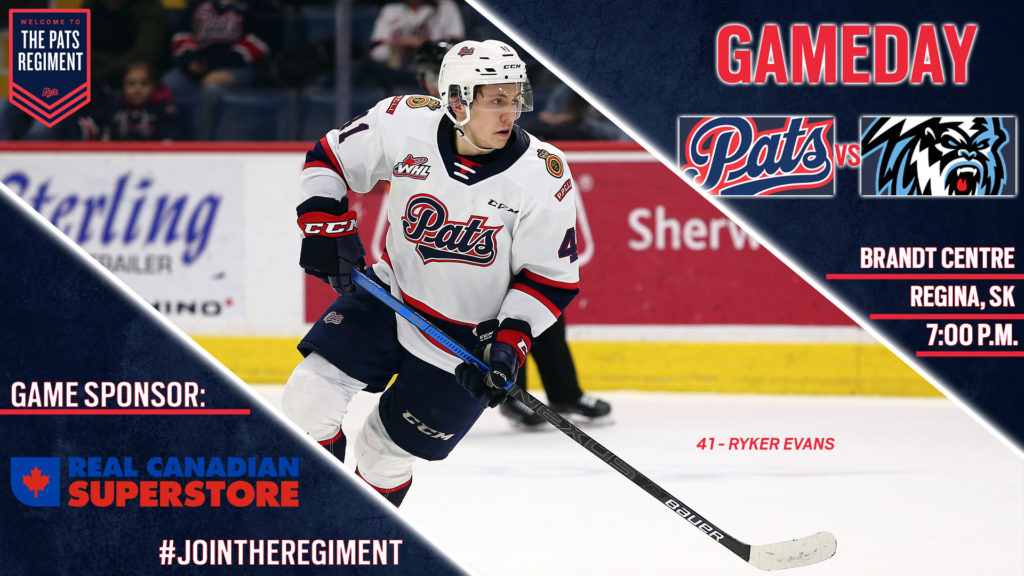 The Regina Pats (21-33-6-2) will play their second last home game of the season on Wednesday night when they host the Winnipeg ICE (37-24-1-0). Puck drop is at 7:00 p.m. at the Brandt Centre. The Pats were last in action on Saturday when they picked up a point in a 5-4 overtime loss at home to Saskatoon. The ICE were last in action on Sunday when they blanked the Prince Albert Raiders 3-0. Tonight is the fifth of six meetings on the year between Regina and Winnipeg, the Pats are 0-2-1-1 so far in the season series. The game can be heard with Bennett Dunlop Ford Pats Hockey starting at 6:35 p.m. on 620 CKRM and will also be broadcast on Access 7.

Quick Facts
– The Pats are 3-5-1-1 in their last 10 meetings with Winnipeg/Kootenay.
– Regina is 8-5-3 in their 16 home games in the second half of the season.
– The Pats are 1-0-2-0 in the month of March.
– Austin Pratt leads the Pats with seven goals and 19 points in 24 career games against the ICE.
– Robbie Holmes has three goals and four assists in four games against Winnipeg this season.
– Zach Wytinck has put up two goals and two assists in his last three games.
– Cole Carrier has two goals and two assists in his last two games.
– The Pats re-called 15-year-old goaltender Matthew Kieper from the Winnipeg Bruins (MMHL) on Tuesday.

First with the Pats
Pats forward Jakob Brook scored his first goal in a Pats uniform on Saturday night against Saskatoon. The 17-year-old gave the Pats a 2-0 lead in the opening period. Brook was acquired from the Prince Albert Raiders ahead of the 2020 WHL Trade Deadline but didn’t make his debut until February 21 because of a knee injury. The product of Roblin, Manitoba has played in seven games with Regina and picked up his first goal on Saturday. For the season, he has four goals and 10 points in 45 games.

Carrier Finding his Touch
Pats forward Cole Carrier has put up two goals and two assists in his last two games. The 17-year-old had two goals and an assist against Moose Jaw last Tuesday and added an assist in his next game on Saturday against Saskatoon. Carrier was acquired from the Kelowna Rockets in January and is playing his best hockey of the year over the last week. The product of Strathcona, Alberta is up to three goals and six points in 17 games this season with Regina. He started the year in the AJHL with the Whitecourt Wolverines where he had six goals and 13 points in 30 games.

Last Pats Game
The Regina Pats earned another point in the standings on Saturday night in a 5-4 overtime loss at home to the Saskatoon Blades at the Brandt Centre. In the first, it was scoreless until the 13-minute mark when Zach Wytinck would walk into the slot and bury his eighth to give the Pats a 1-0 lead. Three minutes later, Jakob Brook finished off his first with the Pats on a great feed from Cole Carrier and it was 2-0. Regina added another with a minute left in the first on a tip from Austin Pratt, his 20th and it was 3-0. Saskatoon got one back with five seconds left in the period from Nolan Kneen and it was 3-1 after one. In the second, the Blades scored on the powerplay from Tristen Robins and then an even strength marker from Kyle Crnkovic tied the game at three. The Blades took their first lead on a five on three powerplay late in the frame. Scott Walford the goal, and the Pats trailed 4-3 after 40 minutes. In the third, the Pats drew even with a powerplay goal from Zach Wytinck with 1:46 remining. His second of the night and eighth of the season forced overtime in a 4-4 tie. The Blades would win it in the extra frame with 47 seconds left off the stick of Kyle Crnkovic in what was a 5-4 final score.

Last Pats Game Vs Winnipeg
December 15, 2019 – Robbie Holmes scored twice and added an assist in the Pats 5-4 shootout loss at home to Winnipeg. Jackson Leppard, Brad Ginnell and Connor McClennon each had two points in the win for the ICE. Max Paddock made 42 saves for Regina, Liam Hughes 27 for Winnipeg.