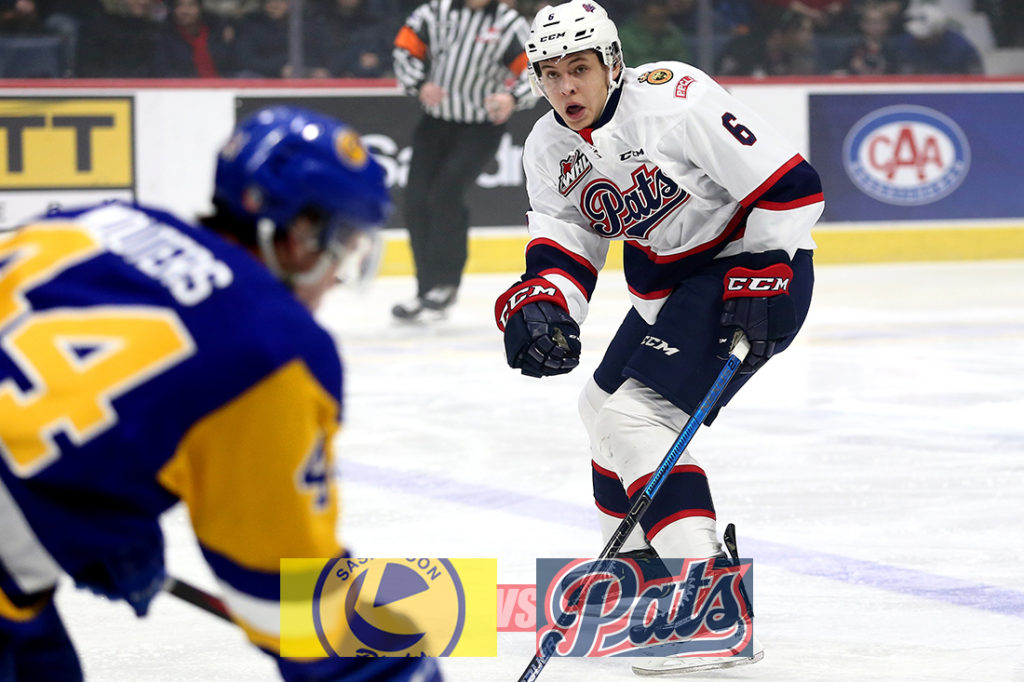 The Regina Pats (13-34-1-2) return to action on Friday night at home against their East Division rivals, the Saskatoon Blades (29-13-7-0). Puck drop is at 7:00 p.m. at the Brandt Centre. The Pats were last in action on Tuesday, losing 5-2 at home to the Calgary Hitmen. The Blades have been off since Saturday when they lost 5-4 in overtime at home against the Swift Current Broncos. Tonight is the fifth of six meetings between Regina and Saskatoon in 2018-19, the Pats are 1-2-1-0 in the season series. Tonight’s game can be heard with Bennett Dunlop Ford Pats Hockey starting at 6:35 p.m. on 620 CKRM and will be broadcast on Access 7.

The Lead Up: Pats fall 5-2 at home to Calgary Tuesday
The Regina Pats fell 5-2 at home to the Calgary Hitmen on Tuesday night at the Brandt Centre. In the first, Calgary opened the scoring five minutes in. The Pats tied it on the powerplay four minutes later, Austin Pratt tipped in his 19th of the season and it was 1-1. The Hitmen retook the lead late in the first and it was 2-1 after one. In the second, the Pats tied it again on the powerplay, Sergei Alkhimov tipped in his 10th to make it 2-2. Makai Mitchell picked up his first career WHL point with an assist on the goal. It stayed 2-2 until the final five minutes of the second when Regina product Carson Focht scored twice, and Calgary led 4-2 after 40 minutes. In the third, the Hitmen extended the lead to 5-2 with a powerplay goal from James Malm and that was the final score. The Pats were outshot 38-23, the powerplay was two for three, the penalty kill went four for six and Max Paddock made 33 saves.

First WHL Point
Pats defenceman Makai Mitchell recorded his first Western Hockey League point on Tuesday with a powerplay assist in the second period against Calgary. The 16-year-old joined the Pats following the Christmas break and will finish the year in Regina. A product of Fort Collins, Colorado, Mitchell has appeared in nine games this season, putting up an assist and six penalty minutes. He was listed and signed in 2018.

Paddock Returns
Pats goaltender Max Paddock made his first start since January 5 on Tuesday against Calgary. The 18-year-old had missed nine games while dealing with an illness. Paddock made 33 saves in his return, 15 in the first, eight in the second and 10 more in the third period.

Kolle Back on the Scoresheet
Pats forward Ty Kolle snapped a 14-game pointless streak on Tuesday with an assist against the Calgary Hitmen. The 18-year-old picked up a helper on the Pats first goal of the game on the powerplay. Despite the streak, Kolle is enjoying a career season with eight goals and 18 points, which are both career highs. The product of Kamloops, British Columbia sits tied for third in team scoring with Sergei Alkhimov. Two points back of Riley Krane, who is second on the team with 20 points. Austin Pratt leads the way with 39 points in 50 games.