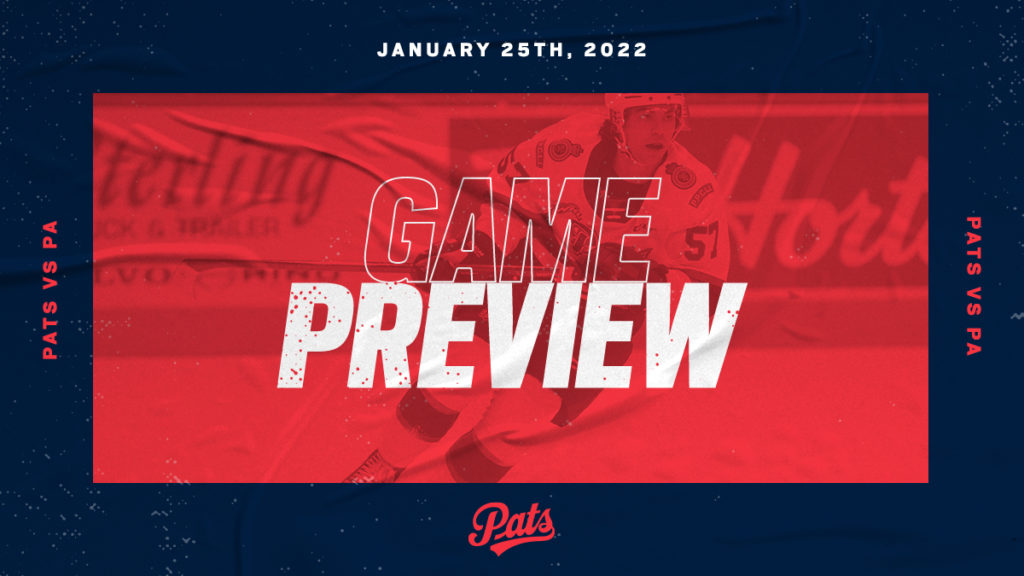 The Pats are coming off a 4-3 shootout loss to the Calgary Hitmen on Tuesday, January 18th inside the Brandt Centre. The Pats salvaged their first point when trailing after two periods of play, while becoming the last team to lose in extra time. The Pats scored first, and once trailed 3-1 until Logan Nijhoff and Zack Stringer scored to help tie it.

Tanner Howe tallied a career high three helpers, while both Ryker Evans (1G-1A) and Nijhoff (1G-1A) each contributed with two points. Drew Sim made 28 saves on 31 shots in the loss. The Pats scored all of their goals on the power play, going 3-for-7 while the Hitmen went 1-for-4.

For the Prince Albert Raiders, they are coming off a 6-4 loss to the Medicine Hat Tigers on Saturday on home ice. Prince Albert had a 4-3 lead after two, but gave up three unanswered goals in the third period in the loss. Evan Herman led the way offensively for the Raiders, scoring two goals and an assist. The final shots were 35-27 in favor of Prince Albert. They went 1-for-3 on the power play and 1-for-1 on the penalty kill.

The Raiders have now lost three straight games, losing to Winnipeg (5-2) and Edmonton (4-1) in their previous two contests. That comes after winning three of their previous four games.

Today Dante De Caria and former Pat’ Matt Strueby have the call inside the Brandt Centre…pre-game show coverage starts at 6:35, with puck drop set for 7:00 p.m., on WHL Live, 620 CKRM, 620ckrm.com and the TuneIn app.

These two cubs last met on December 10th, 2021 inside the Brandt Centre, with the Pats coming away with a 5-2 win on Teddy Bear Toss night. Tanner Howe scored the Teddy Bear Toss goal, with Feist, Rowan Nijhoff and Carrier finding the net as well. Matthew Kieper got the win, making 25 saves on 27 shots as the Raiders outshot the Pats 27-26. The Pats went 3-for-7 on the power play while the Raiders were 1-for-7.

The Pats lead the season series 3-1, having been undefeated at home this season versus Prince Albert. All four meetings this season have been decided by two goals or more. The Pats are 4-6 over their last 10 meetings against Prince Albert as the home team inside the Brandt Centre, and are 8-12 overall over the last five seasons.

6-1-1: Record over the Pats last eight home games…during that span, the club has outscored their opponent 50-to-29…this is versus their current season high five game road losing-streak heading into an upcoming road schedule where they’ve been outscored 28-to-14 during that time.

8: Consecutive games with a point for Pats captain Logan Nijhoff is the longest of his career…the Comox Valley, B.C., native has 17 points (8G-9A) during that span…last week, he reached two milestones, scoring goal #50 on Tuesday vs. Calgary and point #100 on Sunday vs. Moose Jaw.

17: Points (9G-8A) over Connor Bedard’s seven game point-streak…the North Vancouver, B.C., native also has goals in seven of his last 10 games with 11 goals over that time…he is second in the WHL in shots (157) and had his career high four game goal-streak snapped, Tuesday

33: Games this season for the Pats thus far is tied for the second fewest in the WHL (Lethbridge, 33)…the only club that has played fewer games than the Pats is the Kelowna Rockets with 32.

36: Points this season for Pats defenceman Ryker Evans leads the WHL…the Calgary, AB, native is also second amongst defencemen in assists and has one goal and five assists over his last two contests…he has recorded a least a point in 20 of his 33 games this season.