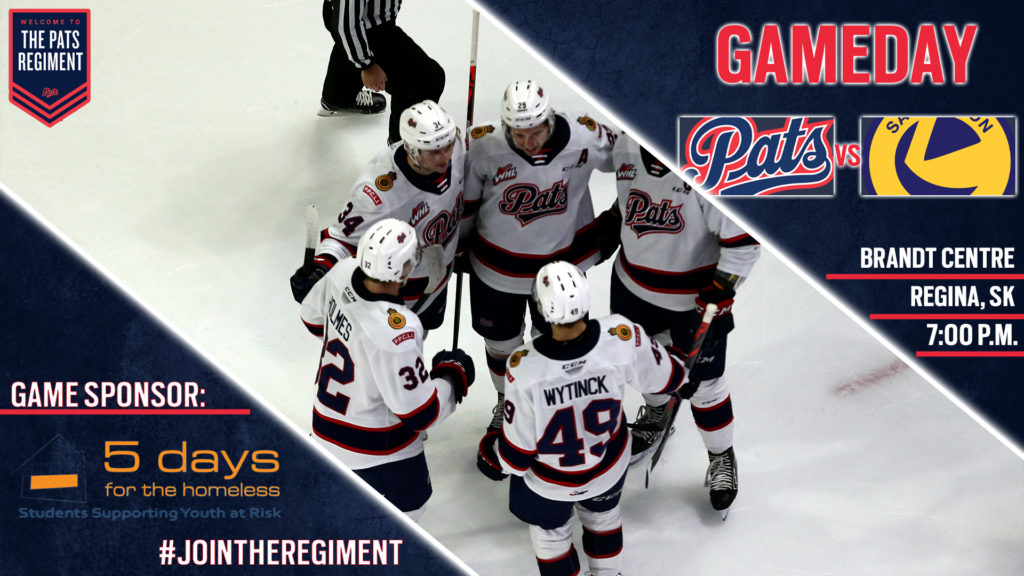 The Regina Pats (21-33-5-2) are back on home ice on Saturday night for the back half of a home and home set with the Saskatoon Blades (32-24-2-3). Puck drop is at 7:00 p.m. at the Brandt Centre. The Pats earned a point in a 2-1 loss in Saskatoon to the Blades on Friday night. Tonight is the fifth of six meetings on the year between Regina and Saskatoon, the Pats are 2-1-1-0 so far in the season series. The game can be heard with Bennett Dunlop Ford Pats Hockey starting at 6:35 p.m. on 620 CKRM.

Quick Facts
– The Pats are 3-5-2-0 in their last 10 meetings with Saskatoon and are 2-1-1-0 in the 2019-20 season series.
– Regina is 12-15-2-1 in their 30 games in the second half of the season.
– Pats defenceman Ryker Evans has a goal and two assists in his last two games.
– Donovan Buskey is 5-1-0-0 in his six career starts against the Blades.
– 17-year-old goaltender Spencer Welke made 37 saves Friday and is 1-0-1 to start his WHL career.
– Cole Carrier had a career high two goals and three points against Moose Jaw on Tuesday night.
– Zach Wytinck has set a new career high with 45 points on the year.
– Austin Pratt is riding a career high season with 54 points in 61 games.
– Carson Denomie leads the Pats with 21 goals and 20 powerplay points.

Nijhoff Keeps Rolling
Pats forward Logan Nijhoff continued his good stretch on Friday with his 16th goal of the season in Saskatoon. The 18-year-old has goals in back to back games and has four goals and six points in his last seven games. Since the start of the second half of the season, the product of Comox Valley, B.C. has put up 11 goals and 12 assists for 23 points in 31 games. For the season, he has scored 16 goals and has 34 points in 60 contests. His goals, assists, shots on goal (137) and penalty minutes (73) are all career highs.

Career Year
Pats defenceman Zach Wytinck added another assist on Friday night in Saskatoon and is enjoying a career year with 45 points in 57 games. The 20-year-old had 43 points last year as a member of the Brandon Wheat Kings. Wytinck leads the team with 38 assists, which is good for eighth most among all WHL defenceman. His 45 points are 14th most in the league. Wytinck has seven games left in his WHL career and is four assists away from 100.

Last Pats Game
The Regina Pats got 37 saves from Spencer Welke in a 2-1 overtime loss in Saskatoon to the Blades on Friday night. In the first, the Pats came close to the game’s first goal when both Zach Wytinck and Cole Dubinsky hit the post, but it was scoreless after 20 minutes of play. In the second, it stayed tied at zero until with four minutes left in the frame. Colton Dach stole a puck and snapped in a goal from the right point to make it 1-0 Saskatoon and that was the score after two periods. In the third, the Pats tied the game in the final minute with their net empty. Logan Nijhoff finished off his 16th on the back hand with 44 seconds left to force overtime. Regina went to the penalty kill early in the extra period and the Blades would capitalize thanks to Kyle Crnkovic and take the extra point in a 2-1 final. The Pats were outshot 39-33, the powerplay was oh for three, the penalty kill three for four while Spencer Welke made 37 saves.

Last Pats Game Vs Saskatoon
March 6, 2020 – Spencer Welke made 37 saves and Logan Nijhoff scored the lone goal in the Pats 2-1 overtime loss in Saskatoon. Colton Dach and Kyle Crnkovic scored the goals for the Blades who got 32 saves from Nolan Maier.