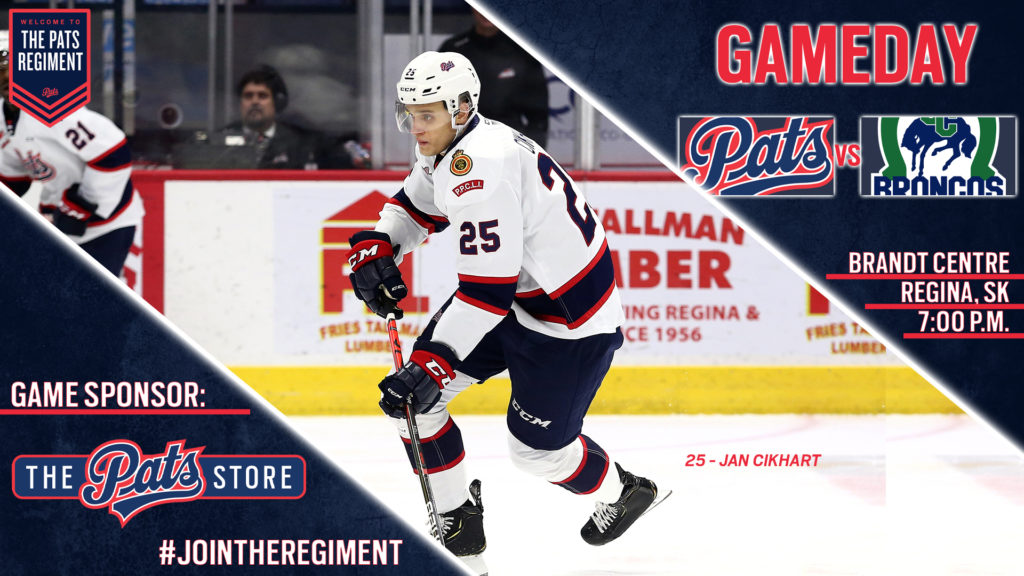 The Regina Pats (11-20-3-1) return to home ice on Saturday when they host the Swift Current Broncos (8-24-1-2). Puck drop is at 7:00 p.m. at the Brandt Centre. The comeback fell short in Swift Current on Friday, falling 7-5 to the Broncos at the Credit Union Iplex. Tonight is the fourth of six meetings between Regina and Swift Current this year, the Pats are 1-2-0-0 so far in the season series. The game can be heard with Bennett Dunlop Ford Pats Hockey starting at 6:35 p.m. on 620 CKRM.

Quick Facts
– The Pats will meet the Broncos for the fourth time on Saturday, the Broncos have a home and road win in the season series, the Pats victory came on the road.
– Zack Smith has three goals against Swift Current this season.
– Cole Dubinsky has a goal and three assists in the five games since the Christmas Break.
– Jan Cikhart scored his first goal in a Pats uniform on Friday night in Swift Current.
– Austin Pratt leads the Pats with 31 points this season and is third in the WHL with 159 shots on goal.
– Zach Wytinck picked up his 23rd assist of the season on Friday, that is tied for third among all WHL defencemen.
– The Pats are 3-2-0-0 since the Christmas Break.

Number One
Pats forward Jan Cikhart scored his first goal with the Pats on Friday night in Swift Current. The goal was the second of his WHL career, he had one goal to start the season with the Tri-City Americans. The product of Praha, Czech Republic is up to five points on the year and has one goal in three games with the Pats.

Second Half Success
Pats forward Cole Dubinsky continues to impress to start the second half of the season. The 17-year-old picked up two assists on Friday night in Swift Current and has a goal and three assists for four points in five games since the break. Dubinsky is up to two goals and 10 points in 30 games so far this year. Friday marked the second multi-point game of the season for Dubinsky and third of his WHL career.

Last Pats Game
The Regina Pats comeback came up a goal short in Swift Current on Friday, falling 7-5 to the Broncos. In the first, the Broncos scored 50 seconds in to take a 1-0 lead. The Pats powerplay responded at 15:27 when Zack Smith snapped home his fifth to tie the game at one. Swift Current took the lead back at 17:11 thanks to Cole Nagy and it was 2-1 after 20 minutes. In the second, the Broncos scored three times in the opening 2:35. Two coming on the powerplay and one shorthanded to open a 5-1 lead. Kyle Walker got one back for Regina, his fifth and it was 5-2. The Broncos powerplay scored again shortly after to go up 6-2 with eight minutes left in the period. Regina cut the lead to three 42 seconds later, Drew Englot tipped in his fifth on a great feed from Cole Dubinsky and it was a 6-3 game after two periods. In the third, Jan Cikhart got his first with the Pats, second of the year and then Austin Pratt scored his 13th and the Pats were within a goal at 6-5. Regina went with the extra attacker in the final minutes, but the Broncos scored into the empty net with 30 seconds left and took the game 7-5.