PREVIEW: Pats host Rebels looking to make it three in a row 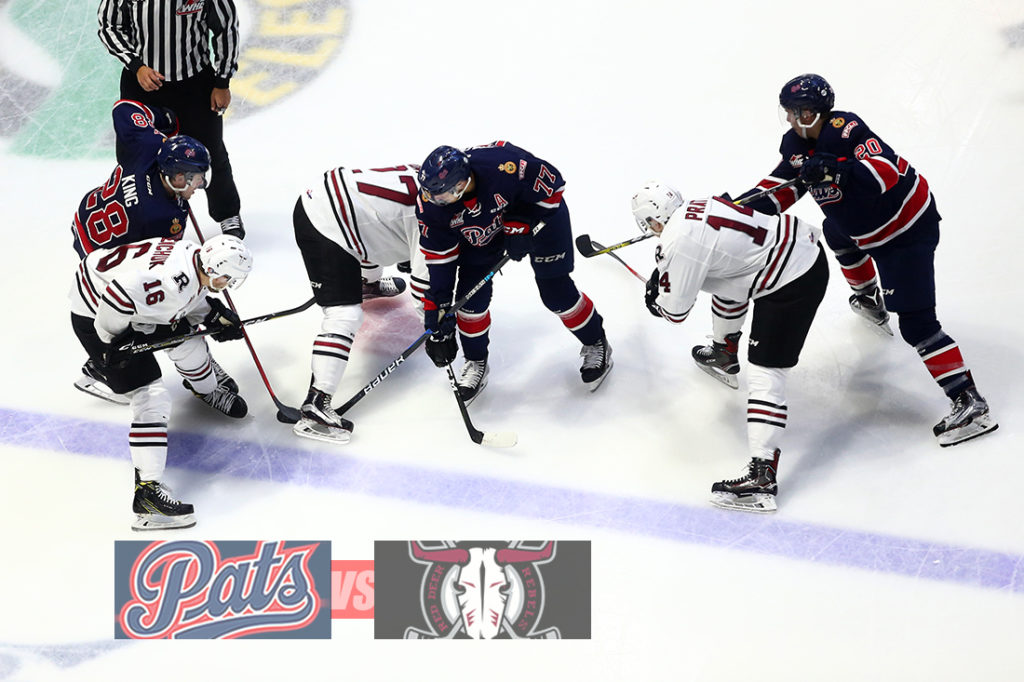 The Regina Pats (10-6-2-0) look to make it three straight wins on Friday night when they host the Central Division leading Red Deer Rebels (8-7-1-0). Puck drop is at 7:00 p.m. at the Brandt Centre. The Pats are coming off a 5-1 win over the Kootenay ICE on Wednesday. The Rebels were last in action on Wednesday at home to Seattle and lost 4-2. Tonight is the third of four meetings between the two clubs in 2017-18. The game can be heard starting at 6:35 with Bennett Dunlop Ford Pats Hockey on 620 CKRM.

The Lead Up: Pats solid in win over Kootenay Wednesday
The Regina Pats won their 10th game of the season on Wednesday night, 5-1 over the Kootenay ICE at the Brandt Centre. The ICE led 1-0 after the first on a goal from Alec Baer, but the Pats exploded for four in the second to take the lead for good. Robbie Holmes got it started with his fourth of the year just over four minutes into the period. Forty-seven seconds later, Jake Leschyshyn put home a rebound for his third to give Regina their first lead. Leschyshyn would score again, his fourth, less than two minutes after that and the Pats went up by two. Koby Morrisseau rounded out the scoring in the second with his first in a Pats uniform and Regina took the three goal lead to the intermission. In the final frame, Dawson Davidson would score on the powerplay, his third goal in as many games, making the game 5-1 and that was the final.

Head to Head.
The Pats are 1-0-1-0 against Red Deer so far on the season, winning the first matchup at home 6-1 and losing on the road 4-3 in overtime. The Pats have outshot Red Deer 71-52, the powerplay has gone three for 10 and the penalty kill seven for nine. Dawson Davidson leads Regina with two goals and five points in the two games. Emil Oksanen has four points while Sam Steel and Josh Mahura each have three. The Rebels are led by 12 different players in the season series, each have one point. Tyler Brown has started both games for the Pats, putting up a 2.47 goals against average and a .881 save percentage. The Pats enter Friday night, second in the East Division, two points back of the Moose Jaw Warriors. The Rebels lead the Central Division, one point ahead of the Medicine Hat Tigers.

Davidson On Fire
Pats defenceman Dawson Davidson is enjoying his best stretch offensively in a Pats uniform. The 19-year-old has points in three straight games (3G, 4A), bringing his season total to 16 points in 18 games. His totals are sixth best among all WHL defencemen. Davidson has already eclipsed his point totals with the Pats last season (10 points in 40 games).

Morrisseau On the Board
Pats forward Koby Morrisseau scored his first goal with the Pats on Wednesday night against the ICE. The 17-year-old scored late in the second period to make it a 4-1 game. The Grandview, Manitoba product has a goal and an assist in 11 games so far on the season. For his career, Morrisseau has scored twice and has two assists in 33 games. Morrisseau, the ninth overall pick in the 2015 WHL Bantam Draft, was acquired in a trade with Spokane this past June.