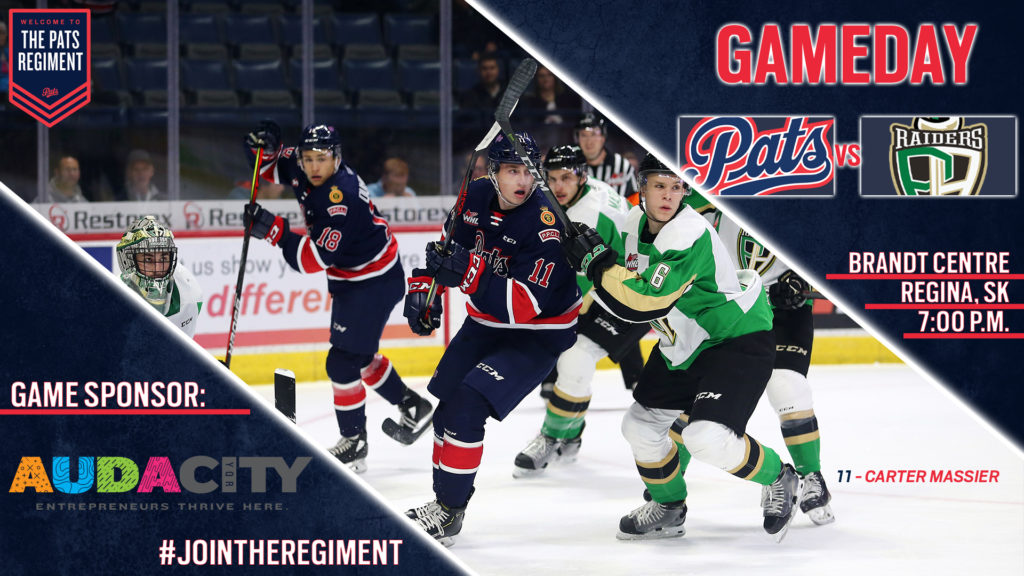 The Regina Pats (2-12-2-0) are on home ice on Saturday night for Experience Regina Night against the Prince Albert Raiders (13-4-3-0). Puck drop is at 7:00 p.m. at the Brandt Centre. The Pats last game was on Saturday when they dropped a back and forth affair in Winnipeg to the ICE 5-3. The Raiders last game was on Saturday when they fell 3-2 at home to Red Deer. Tonight is the fourth of six meetings between Regina and Prince Albert in 2019-20, the Pats are 0-3-0-0 in the season series. The game can be heard with Bennett Dunlop Ford Pats Hockey starting at 6:35 p.m. on 620 CKRM and will also be broadcast on Access 7.

Quick Facts
-Tonight is the fourth meeting between Regina and Prince Albert, the Pats are 0-3-0-0 in the season series.
-Regina is 2-8-0-0 in their last 10 meetings with the Raiders.
-The Pats are 1-7-0-0 against the East Division so far this season.
-Cole Dubinsky has assists in three straight games entering tonight’s contest.
-The Pats acquired 18-year-old forward Carter Chorney from Swift Current on Wednesday.
-Zach Wytinck has a goal and 10 points in eight games with the Pats this year.
-Carter Massier recorded his first multi-goal game of his WHL career on Saturday in Winnipeg.
-Caiden Daley has two assists in the first three games of his Pats career.

Pats acquire Chorney from Swift Current
On Wednesday, the Pats made a trade with the Swift Current Broncos, acquiring 18-year-old right winger Carter Chorney in exchange for 17-year-old defenceman Sam McGinley. Chorney has played in 120 career games in the WHL between Swift Current and Spokane, scoring 17 goals and 33 points in the process. He was originally a second-round pick, 39th overall by the Chiefs in 2016. The Sherwood Park, AB product has one goal and five points in 17 games so far this year.

Career Mark for Massier
Pats sophomore forward Carter Massier picked up the first multi-goal game of his WHL career on Saturday, scoring twice in Winnipeg against the ICE. The 18-year-old has three goals and six points so far this year, last season as a rookie he scored five times and had nine points in 54 games. Massier is seventh on team scoring with his six points and his three goals are tied for fifth most.

Last Pats Game
The Regina Pats dropped a back and forth affair in Winnipeg, 5-4 to the ICE on Saturday night. The ICE got off to a fast start with a breakaway goal from Isaac Johnson in the opening minute to lead 1-0. The Pats tied it on the powerplay at 6:17, when Ty Kolle ripped one off the bar and in for his sixth from the left circle and it was 1-1. Winnipeg went back ahead when Johnson picked up his second of the game and it was 2-1 after one. In the second, Carter Massier and Drew Englot each scored their second goals of the season in the opening nine minutes to give the Pats their first lead of the night at 3-2. Winnipeg tied it late in the second and it was 3-3 heading to the third. The ICE added a powerplay goal and another even strength to go up 5-3 with 12 minutes left. Carter Massier got the Pats back to within one with his second of the night and third of the year, but Winnipeg held on from there for the 5-4 victory.

Last Pats Game Vs Prince Albert
November 1, 2019 – The Pats took a 2-1 lead to the third in Prince Albert but gave up five in the final frame to lose 6-3 on the road. Logan Nijhoff scored twice for Regina, while Drew Englot picked up his first career WHL goal. The Raiders were led by Spencer Moe who had a four-point night and Aliaksei Protas had a goal and two helpers. Max Paddock made 35 saves for the Pats, Boston Bilous 23 for Prince Albert.