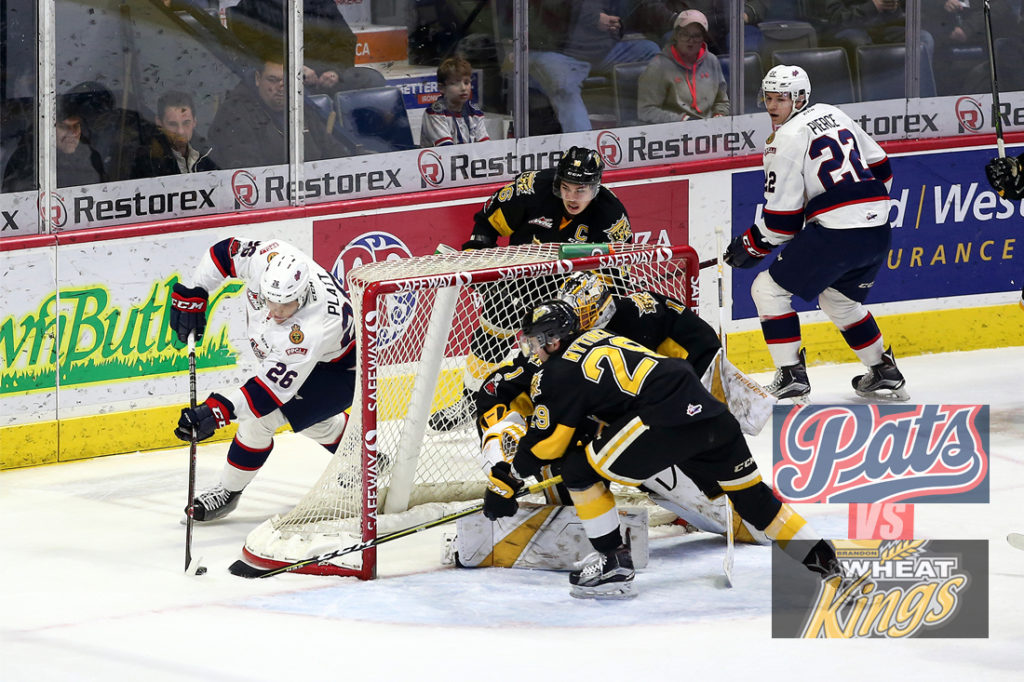 The Regina Pats (2-1-0-0) are on home ice tonight for a preseason tilt with the Brandon Wheat Kings (0-0-1-0). Regina came back from down 2-0 last night in Brandon to beat the Wheat Kings 3-2 in overtime. The contest was Brandon’s first of the preseason while the Pats have played three games so far. Puck drops at the Brandt Centre at 7 p.m. and tickets are $10 at the door. The game will be broadcast on 620 CKRM starting with Bennett Dunlop Ford Pats Hockey at 6:35.

Lead Up: Austin Pratt leads Pats past Wheat Kings Friday
Austin Pratt scored twice including the winner as the Pats beat the Wheat Kings 3-2 in overtime in Brandon on Friday night. The Wheat Kings picked up the lone goal of the first shorthanded, a breakaway marker for Linden McCorrister six minutes in. In the second, Brandon extended the lead to 2-0 but the Pats got one back late off the stick of Nikita Sedov and it was 2-1 after forty minutes. In the third, Austin Pratt tied it for the Pats with his second of the preseason and that forced overtime. In OT, Pratt gave the Pats the 3-2 win with his second of the game, a beauty into the top of the net and Regina improved to 2-1-0-0 in the preseason. The Regina powerplay was one for three and the penalty kill seven for seven. Brandon outshot the Pats 31-28 in the defeat. Kyle Dumba earned the win in goal stopping 20 of 20 shots faced after replacing Carter Woodside who stopped nine of 11.

Pratt rolling early
19-year-old forward Austin Pratt is off to a good start to his first full season in Regina. The product of Lakeville, Minnesota was acquired from the Red Deer Rebels midway through the 2017-18 season. In two games so far in the 2018 preseason, Pratt has scored three times. His first goal came against Swift Current in the Pats first preseason game then added two on Friday in Brandon. Pratt is looking to return to his offensive form from two years ago in Red Deer when he scored 16 goals and had 34 points as a 17-year-old.

Pats sign Makai Mitchell
The Regina Pats Hockey Club is pleased to announce they have signed 16-year-old defenceman Makai Mitchell to a standard WHL Player Agreement. Mitchell (6’1, 192) was listed by the Pats during the 2017-18 season and attended his first training camp in Regina in 2018. The Fort Collins, Colorado product played the 2017-18 season with the Rocky Mountain Roughriders 16U of the NAPHL. He scored four goals and had seven points in 17 games.