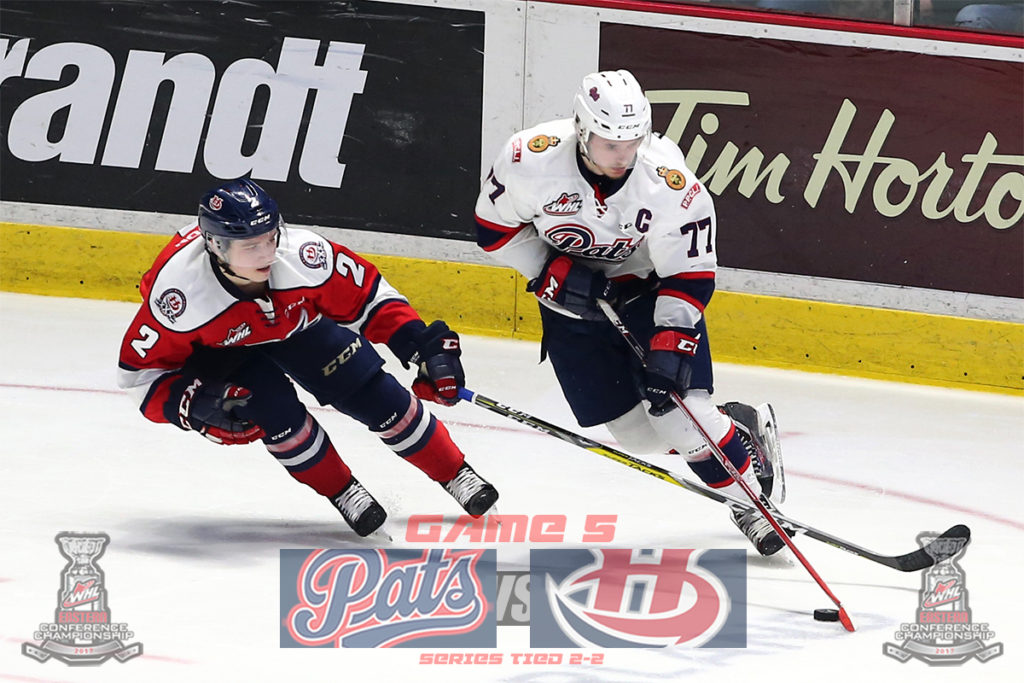 The Regina Pats (10-5) host game five of the Eastern Conference Championship Series tonight against the Lethbridge Hurricanes (10-8). Puck drop at the Brandt Centre is at 7 p.m. The Pats won game four on Wednesday night in Lethbridge 6-2 to even the best-of-seven series at two games apiece. The game can be heard on 620 CKRM with Bennett Dunlop Ford Pats Hockey beginning at 6:35 p.m. It will also be broadcast on the WHL on Shaw and Access 7.

Lead Up: Pats Even Series with 6-2 Win Wednesday
The Regina Pats evened the Eastern Conference Championship Series at two games apiece on Wednesday with a 6-2 win over the Lethbridge Hurricanes. The Pats led 1-0 after one and 4-2 after two en-route to the 6-2 victory. Adam Brooks and Connor Hobbs each scored a goal and had two assists while Sam Steel and Wyatt Sloboshan had two point nights. Tyler Brown stopped 24 pucks directed his way, Stuart Skinner made 28 saves for the Hurricanes. Regina outshot Lethbridge 34-26, the powerplay was one for four and the penalty kill two for two.

Series At A Glance
The Pats and Hurricanes have one home win and one road win to start the Eastern Conference Championship which is tied 2-2.  The Pats have scored 11 goals through four games, the Hurricanes have 10. Regina has outshot Lethbridge 151-109, the powerplay has gone one for 14 and the penalty kill 11 for 12 with a shorthanded goal. Adam Brooks leads Regina with two goals and two assists in the series. Connor Hobbs, Wyatt Sloboshan, Filip Ahl, Sam Steel and Sergey Zborovskiy each had put up three points against the Hurricanes. Tyler Brown is 2-2 with a 2.13 goals against average and a .917 save percentage. The Hurricanes are led by Igor Merezhko, Giorgio Estephan, Jordy Bellerive and Zak Zborosky who have three points in the series. Stuart Skinner is 2-2 with a 2.36 goals against average and a .933 save percentage.

Powerplay Breaks Through
After going oh for 13 on the powerplay to start the series, the Pats man advantage broke through on their 14th opportunity on Wednesday night in game four. Connor Hobbs hammered a slap shot from the high slot for his fourth of the playoffs, third on the powerplay, to make it a 5-2 game. Regina enters Friday night with the third best powerplay among the teams still playing in the playoffs at 24.1 per cent (13 for 54). Hobbs leads the team with three powerplay goals, Austin Wagner and Dawson Leedahl each have two.

Another Game Winner
Pats Captain Adam Brooks scored his fourth game winner of the playoffs in Wednesday night’s game four win over the Hurricanes. The Maple Leafs prospect has five goals total in the post-season, only one of which wasn’t a deciding marker. The Winnipeg product picked up the game winner in games one and two against the Calgary Hitmen in round one. After returning from injury, Brooks has the game winning goal in both of the Pats victories in the Eastern Conference Championship. The OT winner in game two and the winner in game four in Lethbridge. His 13 points in 13 games is tied for 19th in playoff scoring.