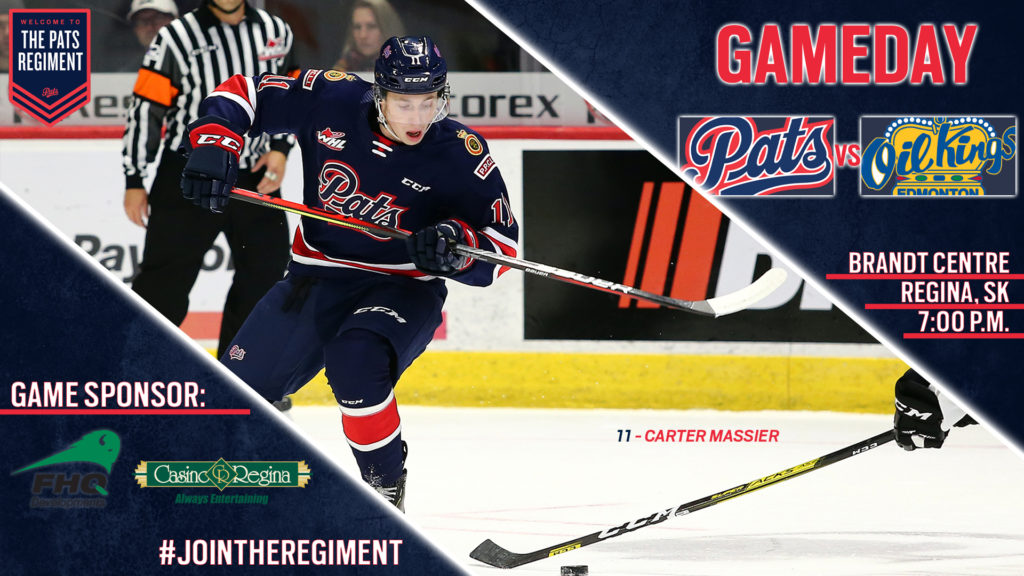 The Regina Pats (1-6-0-0) will play their fourth game in five days on Tuesday night when they host the Edmonton Oil Kings (4-1-2-0). Puck drop is at 7:00 p.m. at the Brandt Centre. The Pats lost a sixth straight game on Sunday, 3-0 in Moose Jaw at the hands of the Warriors. The Oil Kings were last in action on Saturday when they won in Brandon, 2-1 over the Wheat Kings. Tuesday will mark the first of four meetings between Regina and Edmonton in the 2019-20 season. Tonight’s game can be heard with Bennett Dunlop Ford Pats Hockey starting at 6:35 p.m. on 620 CKRM.

Quick Facts
-The Pats and Oil Kings meet for the first time in 2019-20, a year ago Regina was 1-3-0-0 in the season series.
-Regina has gone 6-3-1-0 in the last 10 meetings between the two clubs.
-The last time the Pats and Oil Kings met, Max Paddock made 32 saves for his second career shutout in a 4-0 home win.
-The Pats are 1-3-0-0 on home ice this season.
-Austin Pratt has put up five goals and six assists in 21 career games against the Oil Kings.
-The Pats have given up 30 or less shots in five of their seven games this year.
-Regina has not scored a goal in over eight periods of play, a span of 171:16. Their last goal coming at 8:44 of the first period against Medicine Hat on October 4th.
-This is the first of two Tuesday home games for the Pats this season, they will play three road Tuesday games this year.

30 or less
Despite their 1-6-0-0 record, the Pats have allowed 30 shots or less in five of their seven games so far in 2019-20. Regina is 1-4-0-0 in games they have allowed 30 or less shots, winning at home over Moose Jaw in their home opener. Only Medicine Hat and Winnipeg have been able to put up more than 30 shots against the Pats this year. For the season, the Pats have put 178 shots on goal and allowed 203. Austin Pratt leads Regina with 29 shots on goal, Ty Kolle and Robbie Holmes are next with 15.

Penalty Kill Comes Through
The Pats had their best game on the PK on Sunday in Moose Jaw, going eight for nine including two lengthy five on three situations. The Warriors lone powerplay goal came on their first opportunity and Regina went eight for eight after that. The Pats are now up to 72.2 per cent on the PK this year, going 26 for 36 in their first seven games. However, the Pats have given up a powerplay goal in every game so far in 2019-20.

Last Pats Game
The Regina Pats finished their three in three weekend with a 3-0 road loss to the Moose Jaw Warriors on Sunday. In the first period, the Warriors got goals from Owen Hardy, Carson Denomie and Eric Alarie to lead 3-0 at the break. In the second, the Pats outshot Moose Jaw 11-3 but could not find the back of the net and trailed by three going to the third. In the final frame, The Warriors put 10 shots on net to the Pats seven, but the frame went scoreless and the Pats fell 3-0 on the road. The Pats were outshot 25-19, the powerplay was oh for four and the penalty kill went eight for nine, while Max Paddock made 22 saves.

Last Pats Game Vs Edmonton
February 15, 2019 – The Regina Pats got 32 saves from Max Paddock in a 4-0 shutout victory over the Edmonton Oil Kings at the Brandt Centre. Austin Pratt had a goal and an assist, while Riley Krane, Garrett Wright and Carter Massier provided the other goals for the Pats. Dylan Myskiw and Todd Scott combined to make 30 saves for the Oil Kings in the defeat.