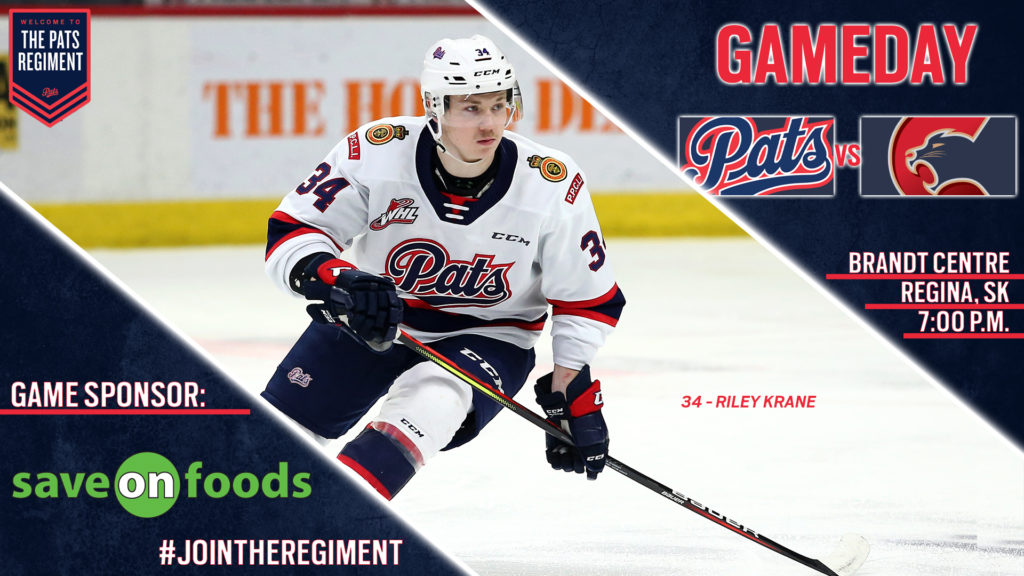 The Regina Pats (11-21-3-2) will wrap up a three-game home stand on Wednesday night when they host the Prince George Cougars (10-22-2-3). Puck drop is at 7:00 p.m. at the Brandt Centre. Pats are coming off a 5-0 loss at home to Brandon, which wrapped up a stretch of seven games in 10 days. The Cougars last game was on Saturday when they lost 5-2 at home to the Everett Silvertips. Tonight is the first and only meeting of the season between Regina and Prince George, the Pats lost the lone meeting last year on the road, 5-3. The game can be heard with Bennett Dunlop Ford Pats Hockey starting at 6:35 p.m. on 620 CKRM and it will be broadcast on Access 7.

Quick Facts
– The Pats are 5-4-0-1 in their last 10 meetings with the Cougars.
– The home team has won the last four contests between Regina and Prince George, the last road win for these two clubs came in November of 2014 when the Pats picked up a 5-2 decision.
– Regina is 3-3-0-1 in seven games since the Christmas break.
– Zach Wytinck is sixth among all WHL defencemen with 30 points on the season. His 25 assists are tied for third and his 13 powerplay helpers are tied for fourth in the league.
– Carson Denomie leads Regina with eight powerplay goals and 16 powerplay points on the season.
– Austin Pratt is tied for second in the league in shots on goal with 171.
– Robbie Holmes has a goal and four assists in five career games against Prince George.

100 Games
Pats second year defenceman Nikita Sedov played in his 100th career WHL game on Sunday when the Pats took on the Brandon Wheat Kings. The 18-year-old was drafted in the second round of the 2018 CHL Import Draft out of Tyumen, Russia. Sedov led all Pats defencemen in scoring with 19 points a year ago and has put up three goals and seven points in 32 games so far this year. He has three goals and 26 points, to go with 150 shots on goal in his 100 career games.

Wytinck Top 10
Pats defenceman Zach Wytinck is sitting near the top of the league among all WHL rear guards entering Wednesday night. The overager has scored five goals and added 25 assists for 30 points in 36 games this year. Since being acquired from the Brandon Wheat Kings, Wytinck has four goals and 23 assists for 27 points in 29 games. His 30 points are sixth among all WHL defencemen, his 25 assists are tied for third and he has 13 powerplay assists which is tied for fourth.

Last Pats Game
The Regina Pats concluded a stretch of seven games in 10 days with a 5-0 loss at home to the Brandon Wheat Kings on Sunday. In the first, the Wheat Kings opened the scoring on the powerplay, just over eight minutes in on a goal from Luka Burzan. They added another on a five on three powerplay and led 2-0 after one. In the second, the Wheat Kings got goals from Connor Gutenberg and Luka Burzan to lead 4-0 after 40 minutes. In the third, Brandon rounded out the scoring late on a goal from Jonny Hooker and took the two points in a 5-0 final. The Pats were outshot 39-31, the powerplay was oh for five, the penalty kill five for seven and Donovan Buskey made 34 saves.

Last Pats Game Vs Prince George
November 23, 2018 – Nick Henry scored a hat trick, but it wasn’t enough as the Pats fell 5-3 in Prince George. Joel Lakustra, Josh Curtis and Matej Toman led the Cougars with two points a piece. Max Paddock made 16 saves for the Pats in the defeat, Isaiah DiLaura stopped 30 of 33 for Prince George.