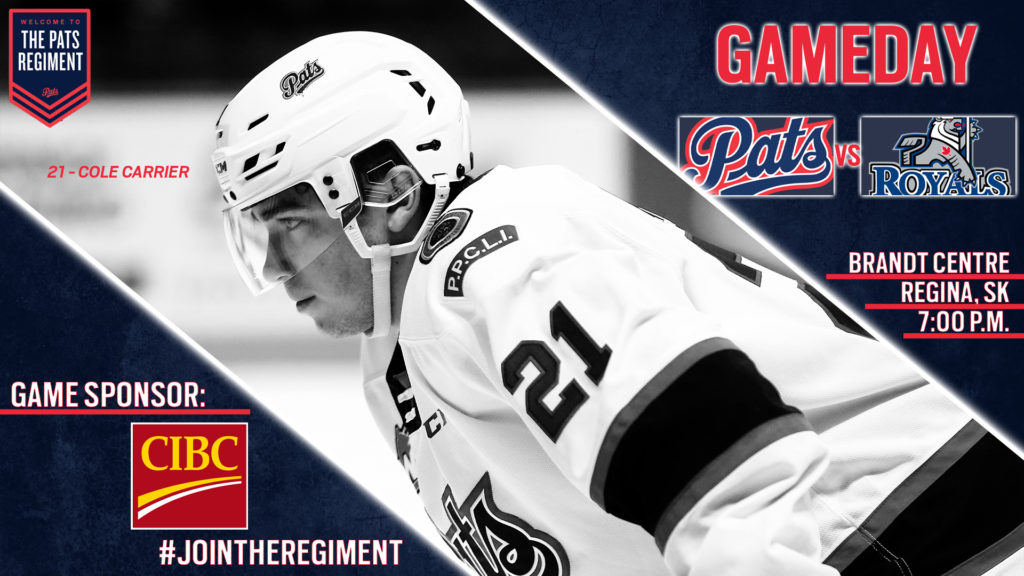 The Regina Pats (14-26-3-2) conclude their three game home stand on Friday night when they host the Victoria Royals (25-18-4-0). Puck drop is at 7:00 p.m. at the Brandt Centre. The Pats last game was on Sunday when the beat the Saskatoon Blades in overtime 4-3 on home ice. The Royals were in Prince Albert on Wednesday and fell 3-0 to the Raiders. Tonight is the first and only meeting of the season between Regina and Victoria, the Pats lost their lone meeting last year in Victoria, 2-1. The game can be heard with Bennett Dunlop Ford Pats Hockey starting at 6:35 p.m. on 620 CKRM and will be broadcast on Access 7.

Quick Facts
– The Pats are 6-4-0-0 in their last 10 meetings with Victoria/Chilliwack. In the seven meetings since the franchise relocated to Victoria, Regina has gone 3-4-0-0.
– The home team has won four of the last five games between Regina and Victoria.
– The Pats are 5-2-0-2 in their last nine home games.
– Austin Pratt leads the Pats with five points in five career games against Victoria.
– The Pats re-called 16-year-old defenceman Marcus Taylor from the Burnaby Winter Club on Monday.
– Carson Denomie leads the Pats with seven goals and 13 points in January.
– Robbie Holmes has goals in back to back games and leads the club with 18 on the year.
– Donovan Buskey is 2-3-0-0 in his last five starts, making 146 saves.

300 WHL Games
Pats captain Austin Pratt will play in his 300th Western Hockey League game on Friday night against the Royals. The 20-year-old began his WHL career in 2015-16 with the Red Deer Rebels. He went on to play 165 games in Red Deer before being traded to Regina during the 2017-18 season. He has appeared in 134 games with the Pats over the last three years. In 299 games to date, the product of Lakeville, MN has scored 70 goals and 157 points. He has put up 39 goals and 56 assists for 95 points in his Pats career. Pratt has also played in 17 WHL playoff games and was a member of the Pats Memorial Cup team in 2018 and the Rebels Memorial Cup team in 2016.

Career High Tied
Pats forward Riley Krane has matched his previous career high for goals in a season thanks to his 12th of the year on Sunday against Saskatoon. Krane scored 12 times in 63 games as a rookie last year, but needed just 43 games this season to reach a dozen goals. The 19-year-old had 24 points last season, he is one point away from that entering Friday night, having picked up 11 assists to go along with his 12 goals so far this year. Krane has appeared in 111 games with the Pats, scoring 25 goals and 23 assists for 48 points.

Last Pats Game
Donovan Buskey made 33 saves and Cole Dubinsky scored the winner as the Pats beat the Saskatoon Blades 4-3 in overtime on Sunday. In the first, the Pats opened the scoring at 8:25 when Carson Denomie snapped home his 16th of the year to make it 1-0. Regina added to the lead in the dying seconds of the period, Robbie Holmes broke in, drove the net and made a great move before scoring his 18th with nine seconds left and the Pats took the 2-0 lead to the break. In the second, the Blades cut the lead in half and it was 2-1 heading to the third. In the final frame, Saskatoon tied the game seven minutes in. Regina took the lead back just over a minute later when Riley Krane made a pretty move in front and finished off his 12th. Saskatoon tied it again with 9:33 left and that forced OT in a 3-3 game. In the extra period, Cole Dubinsky walked into the slot and snapped in his third to give the Pats the extra point in a 4-3 final.

Last Pats Game Vs Saskatoon
November 17, 2018 – Jake Leschyshyn scored the lone goal in a 2-1 road loss for the Pats. Kaid Oliver and Tanner Sidaway scored for Victoria. Max Paddock stopped 25 of 27 for Regina, Griffen Outhouse 17 of 18 for the Royals.