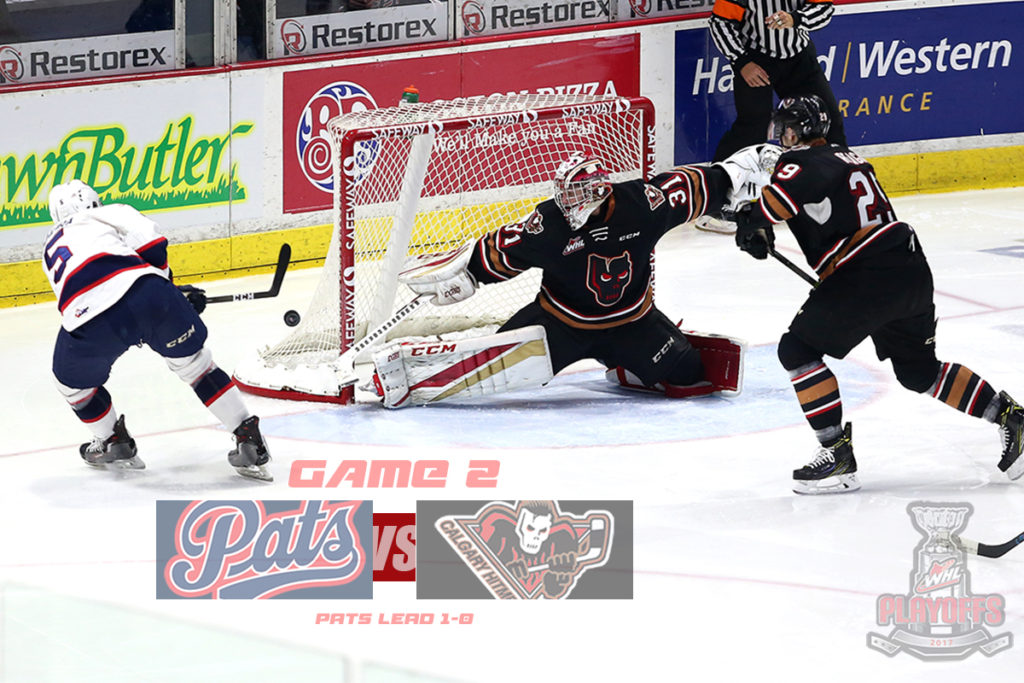 The Regina Pats (1-0) host game two of their first round WHL Playoff series tonight against the Calgary Hitmen (0-1). Puck drop at the Brandt Centre is at 7 p.m. The Pats won game one of the series on Friday night at the Brandt Centre, 5-2 the final score. The game can be heard on 620 CKRM with Bennett Dunlop Ford Pats Hockey beginning at 6:35 p.m. The game will also be broadcast on Access 7.

Lead Up: Brooks Leads Pats to Game One Win
The Regina Pats won game one of their first round playoff series over the Calgary Hitmen at the Brandt Centre on Friday night, 5-2 the final score. After a scoreless first, the two clubs traded powerplay goals in the second and it was 1-1 heading to the third. In the final frame, the Pats scored four times, two from Adam Brooks and singles from both Bryan Lockner and Austin Wagner en-route to a 1-0 series lead. Adam Brooks led the offense with two goals and two assists while Connor Hobbs and Filip Ahl each had two assists. Regina outshot Calgary 32-22 in game one, the powerplay was one for two, the penalty kill two for three with a shorthanded goal and Tyler Brown made 20 saves in goal. Regina has won nine straight games going back to the regular season.

Brooks on Fire
Pats captain Adam Brooks picked up right where he left off from the regular season in game one against Calgary. The Toronto Maple Leafs prospect scored twice and added two assists for a four point night, including the game winner. Brooks, in 11 games in the month of March, has scored 12 goals and has 29 points. Brooks was named a first team Eastern Conference All-Star this week and finished second in the entire CHL with 130 points in the regular season. The Winnipeg, Manitoba product played in his 26th career playoff game on Friday, he has 13 goals and 35 points in those games.

Ahl Streaking
Ottawa Senators prospect forward Filip Ahl is playing some inspired hockey in the last couple of weeks. The 19-year-old is riding a four game points streak going back to the regular season and into the first game of the playoffs. He has three goals and four assists for seven points in those four games. The native of Jonkoping, Sweden finished tied for seventh amongst WHL rookies in the regular season with 48 points and was tied for fourth with 28 goals.

Henry to Make Playoff Debut
Pats rookie of the year Nick Henry will get into his first WHL Playoff game of his career tonight in game two. The 17-year-old was forced to miss game one, serving a one game suspension. Henry played in all 72 games of the regular season and finished second in rookie scoring with 81 points, second in goals with 35 and second in assists with 46. The Portage la Prairie, Manitoba product was ranked 25th in the midterm rankings for the 2017 NHL Entry Draft by the Central Scouting Service.