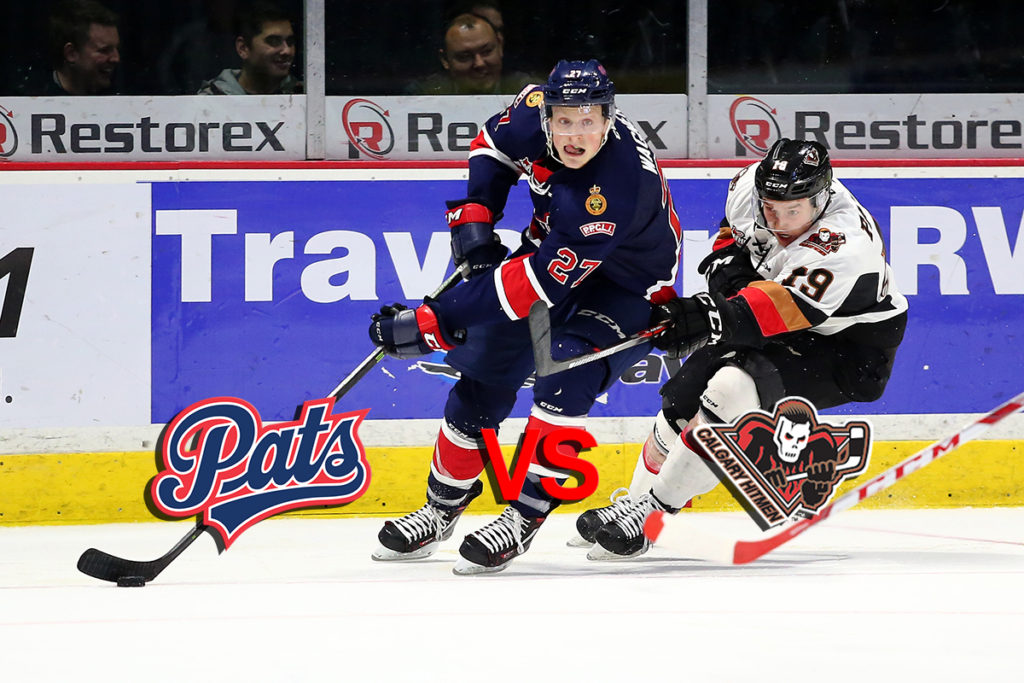 The Regina Pats (26-3-6-1) are back at the Brandt Centre on Friday night for the first meeting of the season with the Calgary Hitmen (14-17-3-2). Puck drop is at 7 p.m. The Pats are coming off a third straight win on Tuesday, 6-2 in Medicine Hat over the Tigers. The Hitmen were last in action on Monday and dropped a 5-4 shootout decision to the Vancouver Giants. Tonight is the first of four meetings between the Pats and Hitmen on the year. Tonight’s game can be heard on 620 CKRM with Bennett Dunlop Ford Pats Hockey beginning at 6:35 p.m.

Lead Up: Pats Win First Place Battle with Medicine Hat Tuesday
The Pats scored three times in the first six minutes en-route to a 6-2 road victory in Medicine Hat on Tuesday night. Sam Steel and Dawson Leedahl both had three point nights in the win. The Pats scored three times in the first and three in the second and kept the Tigers offense at bay to improve to 26-3-6-1. Tyler Brown stopped 36 of 38 shots for his 18th win of the season. With the victory, the Pats extend their lead atop the Eastern Conference to four points over Medicine Hat with four games in hand.

Pats acquire Draft Pick from Lethbridge
The Regina Pats have acquired a seventh round pick in the 2018 WHL Bantam Draft from the Lethbridge Hurricanes. In exchange, the Pats send 18-year-old defenceman Brady Pouteau to Lethbridge. Pouteau was a fourth round pick by the Pats in 2013. In 61 games over parts of two seasons, the Oak Bluff, Manitoba product has two goals, seven assists and is a plus seven. With the move, the Pats sit with eight defenceman on the roster.

World Juniors
Pats defenceman Sergey Zborovskiy and Team Russia took on forward Filip Ahl and Team Sweden in the bronze medal game at the 2017 World Juniors on Thursday afternoon. Russia won the bronze medal with a 2-1 victory in overtime. Zborovskiy finished the tournament with one assist and was plus two in seven games. Ahl, who placed fourth with Team Sweden, had two assists and was plus six in seven games as well. Zborovskiy is the first member of the Pats to medal at the World Juniors since Jordan Eberle and Colten Teubert won gold with Team Canada in 2010.