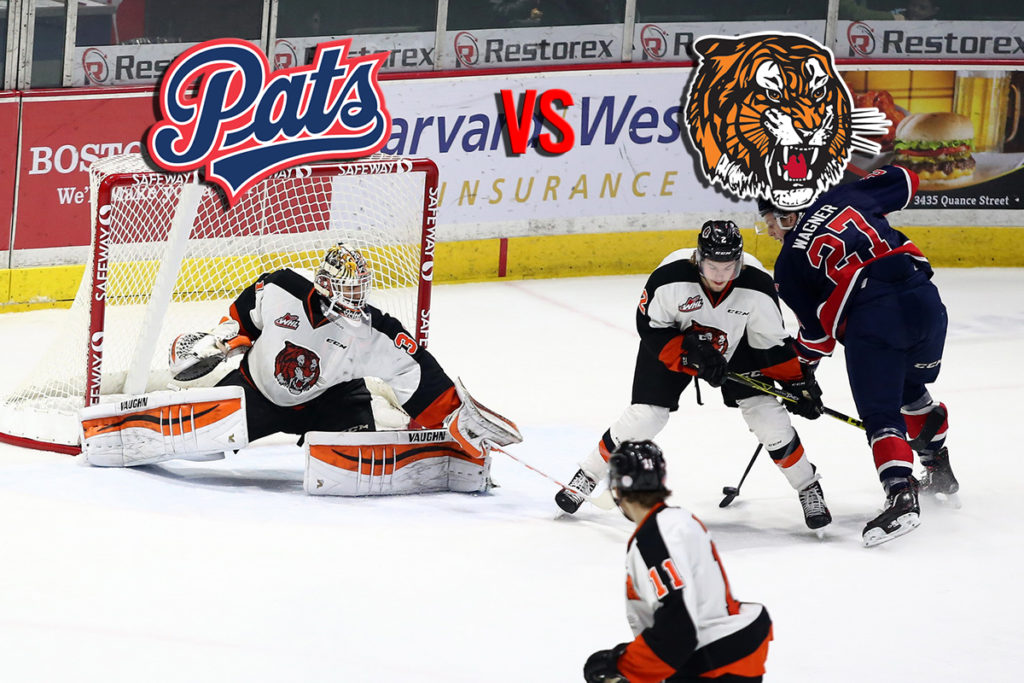 The Regina Pats (29-5-6-1) kick off a three game in three night weekend Friday against the Medicine Hat Tigers (30-14-1-0). Puck drop is at 7 p.m. at the Brandt Centre. The Pats were last in action on Sunday when they beat the Raiders in Prince Albert 5-1. The Tigers were last in action on Tuesday in Saskatoon and lost 5-3. Tonight is the third of four meetings between the two clubs. The Pats are 2-0-0-0 in the previous two meetings and are four points ahead for first in the Eastern Conference with four games in hand. The game can be heard on 620 CKRM with Bennett Dunlop Ford Pats Hockey beginning at 6:35 p.m.

Lead Up: Pats Solid in Road Win Sunday
The Regina Pats wrapped up their busy weekend with a 5-1 victory in Prince Albert over the Raiders on Sunday. The Pats scored once in the first and twice in both the second and third periods in the win. Sam Steel and Connor Hobbs paced the offence with three points each. Max Paddock stopped 33 of 34 shots for his third win in as many WHL appearances. Regina outshot Prince Albert 39-34 and improved to 6-0-1-0 in the season series.

Head to Head
The Pats hold a 2-0-0-0 record against the Tigers in the 2016/17 season. Both wins have come on the road at the Canalta Centre. Regina has outscored Medicine Hat 14-7 in the two games. The Pats powerplay has gone two for five (40%) and the penalty kill nine for 12 (75%), in the two games. The Tigers have outshot the Pats 78-73. Austin Wagner leads the Pats with two goals and four assists in the two meetings while Sam Steel, Dawson Leedahl and Nick Henry each have four points. Clayton Kirichenko leads the Tigers with three points and five others have two. The Pats and Tigers lead their respective divisions in the Eastern Conference, the Pats are four points ahead for first place overall.

Four Pats on CSS Midterm Rankings
The NHL’s Central Scouting Service released its midterm rankings for the 2017 NHL Entry Draft on Wednesday. Four members of the Regina Pats made the list. The top ranked player is forward Nick Henry at number 25 in North America. The Portage la Prairie, MB product has 21 goals and 47 points in 41 games. Forward Jake Leschyshyn is next at number 31. The product of Saskatoon has 16 goals and 36 points this season. Defenceman Jonathan Smart comes in as the 98th ranked skater in North America. He has scored twice and has 19 assists to go along with a plus 29 rating this year. Finally, Jordan Hollett is ranked 11th amongst North American goaltenders. In eight starts, Hollett holds a 7-0-1-0 record with a 2.76 goals against average and a .906 save percentage. The 2017 NHL Entry Draft will take place in Chicago on June 23 and 24.

Number 100
Pats captain Adam Brooks scored his 100th career WHL goal on Saturday night against the Prince Albert Raiders. The Toronto Maple Leafs prospect achieved the feat in his 285th game. 92 of those goals have come in his last 170 games. In his career, the overager from Winnipeg has 100 goals and 180 assists for 280 points, which is 21st in franchise history.