PREVIEW: Pats Host First Half of Home and Home with Moose Jaw 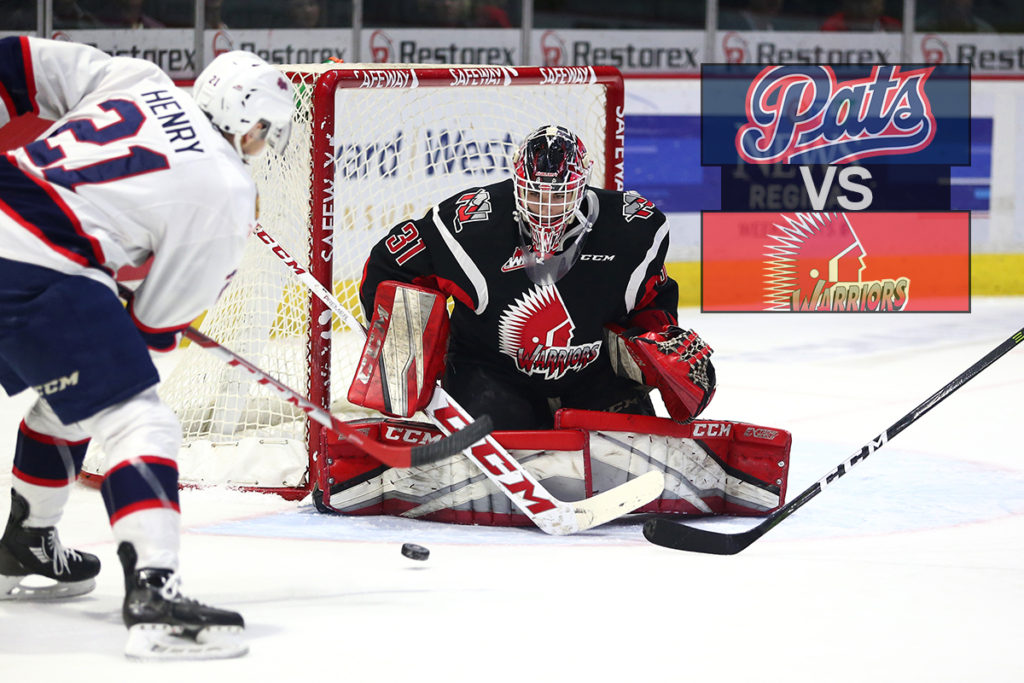 The Regina Pats (46-12-7-1) return home Friday to kick off a home and home set with the Moose Jaw Warriors (41-17-7-1). Puck drop is 7 p.m. at the Brandt Centre. The Pats are coming off a 4-2 victory in Swift Current on Wednesday, their second straight win. The Warriors meanwhile are riding a nine game win streak, the last one coming Sunday, 11-2 over the Kootenay ICE. Regina is 3-3-0-0 against Moose Jaw this season heading into tonight’s seventh of eight meetings on the year. The game can be heard on 620 CKRM with Bennett Dunlop Ford Pats Hockey beginning at 6:35 p.m.

Lead Up: Brooks and Brown lead Pats to Victory in Swift Current Wednesday
The Regina Pats reached 100 points in the standings on Wednesday night with a 4-2 win in Swift Current over the Broncos. The two clubs were tied 1-1 after the first but in the second, Dawson Leedahl and Riley Krane scored to give Regina the two goal lead heading to the final period. The Broncos got one back on the powerplay with just over three minutes left to make it 3-2. However, Wyatt Sloboshan would score into an empty net with 32 seconds left to give the Pats the victory. Adam Brooks led the Regina offence with three assists. The Broncos outshot the Pats 38-33 in the loss, Tyler Brown made 36 saves in the Regina goal, Taz Burman 29 for the Broncos. The Pats powerplay was oh for two while the penalty kill went four for five.

Head to Head
The Pats carry a 3-3-0-0 record against the Warriors into tonight’s contest. The Pats are 2-1-0-0 on home ice in the season series and 1-2-0-0 in Moose Jaw. Regina has scored 21 goals in the six games, the Warriors have 24. The Pats have outshot the Warriors 250-186, the powerplay is six for 19 and the penalty kill 17 for 26. Sam Steel has scored four goals and has six assists for 10 points against the Warriors this year. Adam Brooks has three goals and eight points while Austin Wagner has six points. Moose Jaw’s Brett Howden has scored four goals and has 10 points against Regina. Noah Gregor, Tanner Jeannot and Brayden Burke have six points while Jayden Halbgewachs has five. Regina enters Friday night with a 10 point lead on the Warriors for first in the East Division. The magic number to clinch the division is three points gained by the Pats or lost by the Warriors. If the Pats win tonight, they will clinch first place.

100 Points
For just the second time in franchise history, the Regina Pats have reached the 100 point mark in a season. Wednesday’s win in Swift Current pushed the Pats record to 46-12-7-1 for 100 points in 66 games. The one and only time that happened prior to this year was in 1980-81 when the club went 49-21-2 for 100 points. The next point Regina picks up in the standings will set a franchise record. The 49 wins in 80-81 is also a franchise mark, the Pats will need to win four of their last six games to reach 50 wins and set a new record for a season. Regina enters Friday, five points ahead of Medicine Hat for first in the WHL; the magic number to clinch the Scotty Munro Memorial Trophy as regular season champions is six points. Any combination of three wins or three Medicine Hat losses.