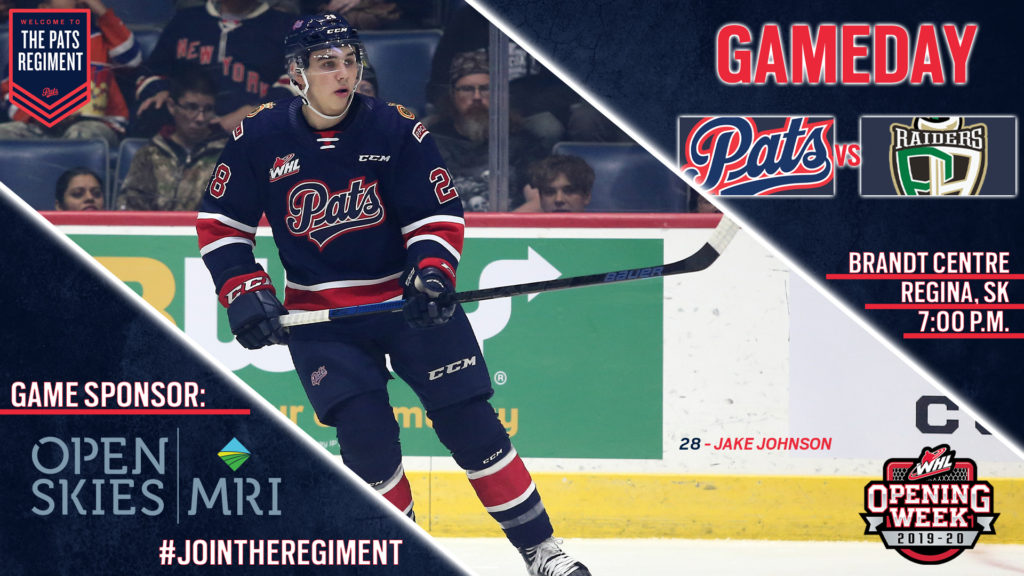 The Regina Pats (1-1-0-0) are back on home ice on Friday when they host the defending WHL Champion Prince Albert Raiders (1-0-1-0). Puck drop is at 7:00 p.m. at the Brandt Centre. The Pats kicked off the season last weekend with a home and home split with the Moose Jaw Warriors. The Raiders split their two games with Saskatoon, picking up three of four possible points. Friday will mark the first of six meetings between the Pats and Raiders in 2019-20, Tonight’s game can be heard with Bennett Dunlop Ford Pats Hockey starting at 6:35 p.m. on 620 CKRM.

Quick Facts
-The Pats are 5-5-0-0 in their last 10 games against the Prince Albert Raiders.
-Regina went 8-0-0-0 against P.A. in 2017-18 and 1-5-0-0 in 2018-19.
-The Pats gave the Raiders their first home loss of the season last season, 2-1 on December 30, 2018.
-Ty Kolle and Austin Pratt lead the Pats with three points through the first two games of the year. The Raiders Aliaksei Protas leads the club with two points on the season.
-Sloan Stanick scored his first career WHL goal in Moose Jaw on Saturday.

Stanick Gets #1
Pats 16-year-old forward Sloan Stanick scored his first career goal in the Western Hockey League on Saturday. The product of Rapid City, MB was acquired from the Everett Silvertips in January and signed with Regina during 2019 training camp. He had a goal and an assist in the WHL pre-season and then scored in the third period of his second game in the league on Saturday against the Warriors. Stanick is one of five WHL rookies who have a goal after opening weekend.

Last Pats Game
The Regina Pats comeback came up a goal short on Saturday night in a 5-3 loss in Moose Jaw to the Warriors. In the first period, the Pats outshot Moose Jaw 18-10, but it was the Warriors who came out of the period with a 2-0 lead. First, Carson Denomie scored on the powerplay, just under eight minutes in to give Moose Jaw the lead. 1:06 later, Ryder Korczak potted his first to round out the scoring in the period. In the second, the Warriors added two more from Tate Popple and Keenan Taphorn and took a 4-0 advantage into the third. In the final frame, the Pats got back into the game with three straight goals. Sloan Stanick got it started with the first of his WHL career at 15:02. Then Riley Krane ripped home his first from the left-wing boards to draw the Pats within two with just under four minutes left in regulation. Robbie Holmes made it interesting with his first of the season with the net empty at 18:55 and it was 4-3. The Pats pressed for the tying goal after that, but it was the Warriors who scored into the empty goal and took the two points in a 5-3 final score. The Pats outshot the Warriors 46-24 in the loss, the powerplay was oh for two and the penalty kill went four for five, while Max Paddock made 19 saves.

Last Pats Game Vs Prince Albert
January 1, 2019 – Noah Gregor, Parker Kelly and Sean Montgomery each had three points to lead the Prince Albert Raiders to a 5-3 win over the Pats in Regina. Riley Krane had a goal and an assist for the Pats, Robbie Holmes and Liam Schioler scored the other Regina goals. Max Paddock made 51 saves on 55 shots for the Pats, Brett Balas stopped 20 of 23 for the Raiders.