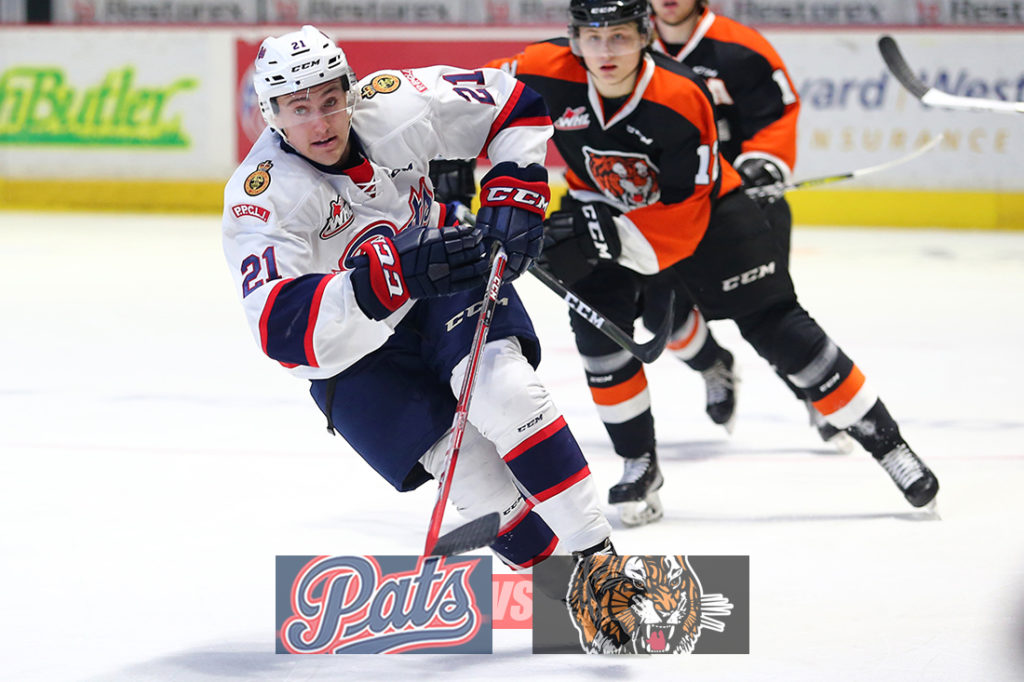 The Regina Pats (21-19-4-0) are on home ice Friday night to take on the Central Division leading Medicine Hat Tigers (23-16-3-0). Puck drop is at 7:00 p.m. at the Brandt Centre. The Pats were last in action on Wednesday when they dropped a 4-3 overtime decision to the Edmonton Oil Kings. The Tigers were in Saskatoon on Wednesday and picked up a 3-2 victory over the Blades. Tonight is the third of four meetings between the two clubs in 2017-18, The Pats hold a 1-1-0-0 record so far in the season series. The game can be heard starting at 6:35 with Bennett Dunlop Ford Pats Hockey on 620 CKRM.

The Lead Up: Pats earn single point Wednesday
The Regina Pats dropped a 4-3 overtime decision to the Edmonton Oil Kings on Wednesday night at the Brandt Centre. Regina opened up a 2-0 lead in the first period when Robbie Holmes scored his 11th and 12th goals of the season. The Oil Kings got one back late with just over seven minutes left and it was 2-1 after one. The Oil Kings then scored early in the second and added another early in the third to lead 3-2. Regina would strike back when Matt Bradley scored on a breakaway for his 26th of the season and 100th goal of his career to make it 3-3 and eventually force overtime. In the extra frame, Brett Kemp scored on a two on one and the Oil Kings took the extra point in a 4-3 final. The Pats outshot Edmonton 36-33, the powerplay was oh for two and the penalty kill three for three. Holmes scored twice, Austin Pratt put up two assists and Ryan Kubic made 29 saves in his Pats debut.

Head to Head
Tonight is the third of four meetings between the Pats and Tigers, both teams have a win in the season series on home ice. Emil Oksanen leads Regina with four points against Medicine Hat while Cale Fleury has three points and Matt Bradley and Jake Leschyshyn both have two. The Tigers are led by Ryan Chyzowski and David Quenneville who had put up three points while Tyler Preziuso and Linus Nassen both have two points.

Pats make three deals Wednesday ahead of the WHL Trade Deadline
The Pats were busy on Wednesday acquiring four players in three different trades. First the team acquired Edmonton Oilers prospect Cameron Hebig and goaltender Ryan Kubic from Saskatoon for Tyler Brown, Bryan Lockner and draft picks. In the afternoon the Pats picked up defenceman Aaron Hyman from Seattle for Owen Williams and a pick. The final trade of the day was with the Lethbridge Hurricanes, getting defenceman Brady Pouteau for a draft pick.

Steel Returns
Pats captain Sam Steel will make his return to the lineup tonight after winning a gold medal at the 2018 World Junior Hockey Championships with Hockey Canada. Steel had at least a point in every game in the tournament, scoring four goals and adding five assists in the seven contests. Steel has played in 27 games with the Pats this year, scoring 14 goals and 21 assists for 35 points. The signed Anaheim Ducks prospect is the reigning WHL Player of the Year.