PREVIEW: Pats host Broncos Tuesday, looking for back to back wins 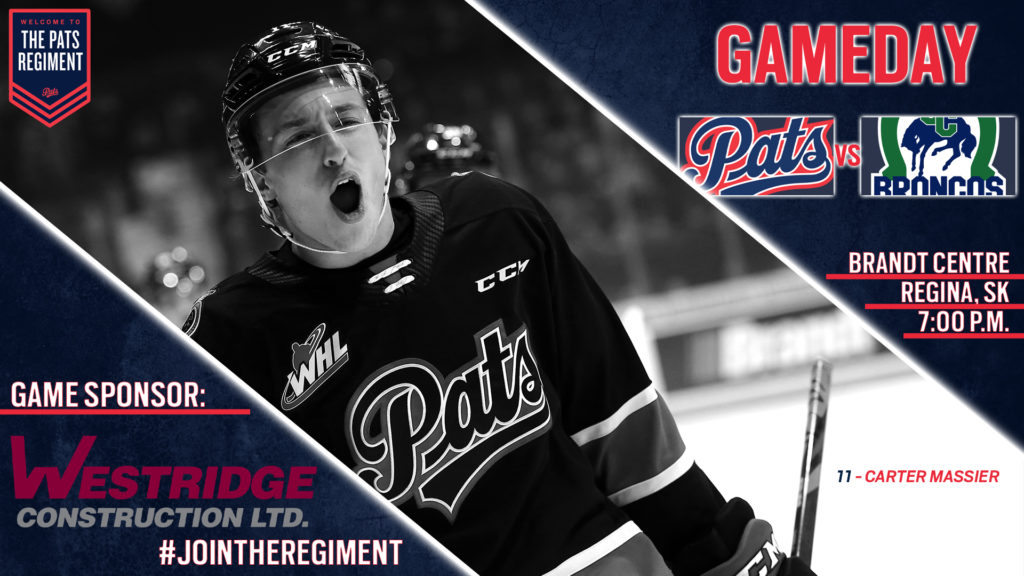 The Regina Pats (3-12-2-0) will look to put back to back wins together for the first time this season on Tuesday when they host the Swift Current Broncos (4-11-1-2). Puck drop is at 7:00 p.m. at the Brandt Centre. The Pats are coming off a 4-3 shootout win at home to Prince Albert on Saturday. The Broncos won their last game as well, 7-3 at home to Moose Jaw on Saturday. Tonight is the first of six meetings between Regina and Swift Current in 2019-20. The game can be heard with Bennett Dunlop Ford Pats Hockey starting at 6:35 p.m. on 620 CKRM.

Quick Facts
– The Pats and Broncos are meeting for the first time on the season tonight, Regina is 4-5-1-0 in their last 10 regular season meetings with Swift Current.
-The Pats are 2-2-2-0 in their last six games.
-The Pats are 1-4-2-0 against the Central Division so far this season.
-Logan Nijhoff has five goals and seven points in his last eight games.
– Austin Pratt and Ty Kolle are each riding three game point streaks entering tonight.
-Carter Chorney scored in his first game with the Pats Saturday and will take on his former team in the Broncos tonight.
-Tyson Feist has assists in back to back games.

Best Stretch
The Pats are enjoying their best stretch of the season, going 2-2-2-0 in their last six contests. The Pats are averaging 3.83 goals per-game over their last six compared to their first 11 games where they had 22 goals, averaging two per-contest. The Pats penalty kill has been solid over this stretch, going 22 for 27 for an 81.5 per cent efficiency. Austin Pratt has four goals and three assists and Zach Wytinck has seven assists to lead the team over the last six. Robbie Holmes and Ty Kolle each have six points in that stretch, while Max Paddock is 1-2-2-0 with an .889 save percentage.

Pats Acquire Regina product Carson Denomie
The Pats swung a deal with the Moose Jaw Warriors on Monday, acquiring 19-year-old forward Carson Denomie in exchange for 18-year-old forward Garrett Wright. Denomie is enjoying a career season with five goals and 13 points in 19 games. He was originally drafted in the fifth round of the 2015 WHL Bantam Draft by the Kamloops Blazers.

Last Pats Game
The Regina Pats outlasted the Prince Albert Raiders in a 4-3 shootout victory on Experience Regina Night at the Brandt Centre on Saturday. In the first, the Raiders opened the scoring with a powerplay goal from Kaiden Guhle at the 10 minite mark. The Pats responded with a goal three minutes later from Ty Kolle, his seventh, and it was 1-1. Less than two minutes after that, Carter Chorney tipped in a point shot for his first with the Pats, second of the season and Regina took a 2-1 lead to the break. In the second, the Pats went up 3-1 when Logan Nijhoff buried his fifth after Garrett Wright forced a turnover at 4:09. The Raiders got one back from Reece Vitelli but Regina led 3-2 after two. In the third, Aliaksei Protas tied the game for the Raiders 6:39 into the period and that forced overtime and eventually a shootout. Max Paddock stopped all three Raiders and Ty Kolle netted the winner and the Pats took the two points in a 4-3 final.

Last Pats Game Vs Swift Current
March 13, 2019 – Isaac Poulter made 33 saves to lead the Broncos to a 2-0 victory over the Pats at the Brandt Centre. Joona Kiviniemi scored in the first period and Ethan O’Rourke late in the third for Swift Current. Max Paddock stopped 31 of 33 shots faced for the Pats in the defeat.