PREVIEW: Pats Host Broncos in Final Meeting of the Season 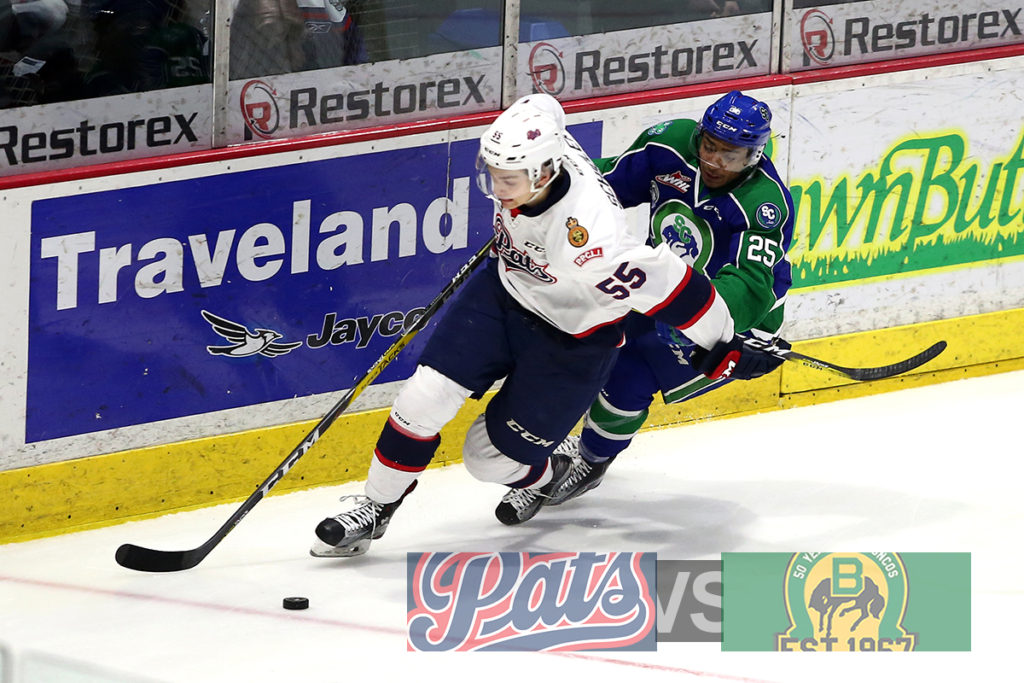 The Regina Pats (49-12-7-1) ride a five game winning streak into tonight’s home game against the Swift Current Broncos (38-21-4-6). Puck drop is 7 p.m. at the Brandt Centre. The Pats were last in action on Tuesday against the Saskatoon Blades, winning 5-4. The Broncos were in Brandon Tuesday and beat the Wheat Kings 6-3 for their third consecutive win. The Pats carry a 6-0-1-0 record against Swift Current into tonight’s eighth and final meeting of the season. The game can be heard on 620 CKRM with Bennett Dunlop Ford Pats Hockey beginning at 6:35 p.m.

Lead Up: Pats Clinch Regular Season Title Tuesday
The Regina Pats won the Scotty Munro Memorial Trophy as WHL regular season champions for the second time in franchise history on Tuesday night. The Pats outlasted the Saskatoon Blades 5-4 to clinch the title. Regina got off to a tough start and trailed 3-1 after the first period at the Brandt Centre. In the second however, Jeff de Wit, Josh Mahura and Sam Steel scored to give the Pats the 4-3 lead heading to the third. In the final frame, Connor Hobbs scored on the powerplay to make it a 5-3 game, the Blades got it back to within one but Regina held on for the 5-4 win. Adam Brooks and Sam Steel led the way with three points each while Tyler Brown made 22 saves in the victory.

Head to Head
The Pats hold a 6-0-1-0 record against Swift Current heading into tonight’s eighth and final meeting of the season. Regina has won twice at home and four times on the road in the season series, losing once at home in overtime. The Pats have scored 37 goals to the Broncos 16 in the first seven games. Regina has outshot Swift Current 303-193, the powerplay has gone 10 for 29 and the penalty kill 19 for 25. Dawson Leedahl has seven goals and 16 points against the Broncos. Sam Steel and Nick Henry each have six goals and 15 points. Adam Brooks has 14 while Connor Hobbs has 11 points. Tyler Brown is 4-0-0-0 with a 1.50 GAA, a .943 save percentage and one shutout in the season series. The Broncos are led by Lane Pederson who has two goals and seven points against the Pats. Aleksi Heponiemi and Max Lajoie each have six points while Glenn Gawdin and Ryley Lindgren each have five points. The Pats are first overall in the WHL with 106 points while the Broncos are five points back of Moose Jaw for second in the East Division with 86 points in the standings.

Scotty Munro Memorial Trophy
For the first time since 1973/74 and for the second time in franchise history, the Regina Pats are Scotty Munro Memorial Trophy Winners. The Pats won a fifth straight game Tuesday night, 5-4 over the Saskatoon Blades, to reach 106 points and to take the league regular season title. In 1973/74, the Pats went 43-14-11 to win the trophy, this year’s Pats are 49-12-7-1 with three games left in the regular season. Regina has tied a franchise record for wins in a season with 49, one more will set a new mark in Pats history.