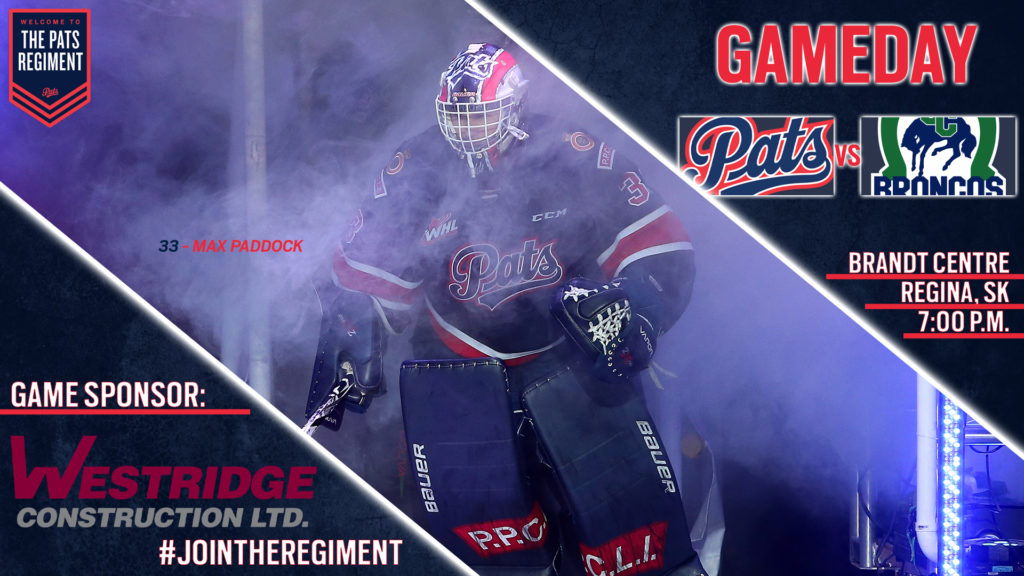 The Regina Pats (2-11-2-0) are back in action at home on Friday night when they host the Swift Current Broncos (3-10-1-2). Puck drop is at 7:00 p.m. at the Brandt Centre. The Pats last game was on Sunday where they lost 3-2 in overtime at home to the Red Deer Rebels. The Broncos meanwhile were in Lethbridge on Wednesday and fell 4-1 to the Hurricanes. Tonight is the first of six meetings between Regina and Swift Current in 2019-20. The game can be heard with Bennett Dunlop Ford Pats Hockey starting at 6:35 p.m. on 620 CKRM and will also be broadcast on Access 7.

Quick Facts
-The Pats and Broncos are meeting for the first time on the season tonight, Regina is 4-5-1-0 in their last 10 regular season meetings with Swift Current.
-Regina has picked up four points in the standings in their last four games.
-The Pats are 1-4-2-0 against Central Division opponents so far in 2019-20.
-Cole Dubinsky has assists in three straight games entering tonight’s contest.
-Zack Smith picked up his first career WHL goal against Red Deer on Sunday.
-Zach Wytinck has a goal and nine points in seven games with the Pats this year.
-The Pats penalty kill is 83.3% in their last 10 games, going 35 for 42.
-The Pats are 1-6-2-0 on home ice this season.

Smith Gets #1
Newly signed Pats forward Zack Smith is off to a good start in his WHL career. The 18-year-old scored the first goal of his career on Sunday against Red Deer in the second period. Smith has a goal and an assist in the first three games he’s played in the league. Smith started the year with the Melfort Mustangs of the SJHL where he had six goals and 14 points in 15 games

Dubinsky’s Good Stretch
Pats sophomore forward Cole Dubinsky has found some consistent offence this season. The 17-year-old has points in three straight games, putting up three assists, to reach six points on the year. All six of those points have come in the last seven games of the season. The product of Ardrossan, AB has been kept off the scoresheet just twice in the last seven.

Last Pats Game
The Regina Pats dropped a tight one at home to Red Deer on Sunday, 3-2 in overtime at the Brandt Centre. In the first period, both teams put seven shots on net, but the game was scoreless into the second period. Regina had two powerplay opportunities in the opening frame to the Rebels one. In the second, Red Deer went up 1-0 when Chase Leslie scored on a two on one rush at 5:19. The Pats came back and scored in the second after a powerplay expired, Zack Smith potted the first of his WHL career from the right circle and it was 1-1 after forty minutes. In the third, the Rebels took the lead with 1:23 left, Josh Tarzwell from the slot, and it was 2-1 Red Deer. The Pats pulled Max Paddock for the extra attacker, and with 40 seconds left, Austin Pratt scored from in tight for his eighth, and the game needed overtime. In the extra frame, Arshdeep Bains scored 48 seconds in to give the Rebels the extra point in a 3-2 final.

Last Pats Game Vs Swift Current
March 13, 2019 – Isaac Poulter made 33 saves to lead the Broncos to a 2-0 victory over the Pats at the Brandt Centre. Joona Kiviniemi scored in the first period and Ethan O’Rourke late in the third for Swift Current. Max Paddock stopped 31 of 33 shots faced for the Pats in the defeat.