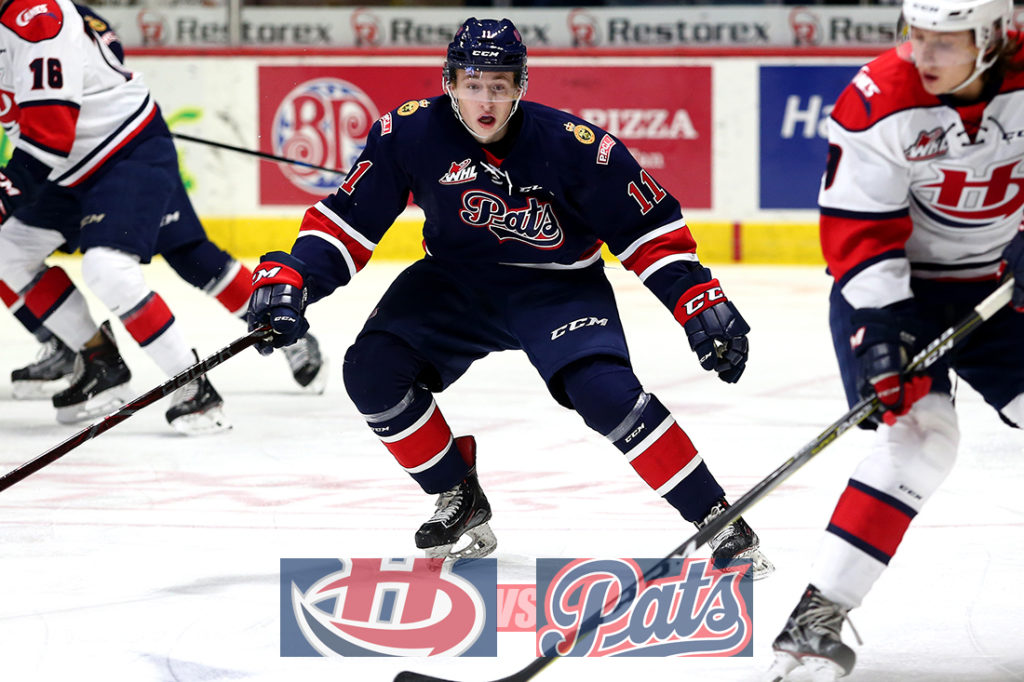 The Regina Pats (18-41-1-2) return to home ice on Saturday afternoon for their final meeting of the year with the Lethbridge Hurricanes (34-18-5-5). Puck drop is at 2:30 p.m. at the Brandt Centre. The Pats were in Saskatoon on Friday night, losing 4-0 to the Blades. The Hurricanes were in Moose Jaw on Friday and blanked the Warriors 5-0. Tonight is the fourth and final meeting between Regina and Lethbridge in 2018-19, the Pats are 1-2-0-0 in the season series. Tonight’s game can be heard with Bennett Dunlop Ford Pats Hockey starting at 2:05 p.m. on 620 CKRM and the game will be broadcast on Sportsnet.

The Lead Up: Pats drop 4-0 decision in Saskatoon Friday
The Regina Pats concluded their season series with the Blades in Saskatoon with a 4-0 defeat on Friday night at the SaskTel Centre. In the first, the Blades got a shorthanded goal two minutes in from Eric Florchuk to lead 1-0. It stayed a one goal game until late in the frame when Max Gerlach scored with 14 seconds left on the clock and Saskatoon led 2-0 after one. In the second, the Blades got goals from Ryan Hughes and Kyle Crnkovic in the first 10 minutes to lead 4-0. Dean McNabb made four highlight reel saves after that to keep it 4-0 after 40 minutes. In the third, McNabb stopped all 12 shots he faced but the Pats were unable to find a goal and fell 4-0. The Pats were outshot 35-19, the powerplay was oh for seven, the penalty kill nine for nine and Dean McNabb made 31 saves in a third star performance.

200 Games
Pats forward Brett Clayton played in his 200th Western Hockey League game on Friday night in Saskatoon. The 20-year-old started his career with the Portland Winterhawks where he played 87 games. The product of Abbotsford, British Columbia then joined the Tri-City Americans for 76 games over two seasons before coming to Regina where he has appeared in 37 games with the Pats. Clayton has scored 11 goals, 16 assists and 27 points in his career to go along with 133 penalty minutes, 116 shots on goal and two game winning goals. He has put up 36 shots on goal in 37 games with the Pats this season.

Penalty Kill Rolling
The Pats penalty kill has been among the best in the Western Hockey League over the last month of the season. Regina has been shorthanded 53 times in their last 12 games and killed of 48 of them for a 90.5 per cent success rate. The Pats are coming off a game Friday where they killed all nine shorthanded situations in Saskatoon. In this 12 game stretch, the Pats have scored three times shorthanded, twice from Carter Massier and once from Logan Nijhoff. Massier is tied for the WHL rookie lead in shorthanded goals this season with two. For the season, the Pats have nine shorthanded goals which ranks tied for eighth in the league.

Welcome Back
The Pats will welcome former teammates Jake Leschyshyn, Nick Henry and Scott Mahovlich back to the Brandt Centre on Saturday for the first time since they were traded to the Lethbridge Hurricanes. Leschyshyn appeared in 213 games in Regina, scoring 61 goals and 131 points and was the team’s captain at the start of this year. Henry played in 150 games with the Pats, scoring 64 goals and 150 points. Mahovlich spent 68 games in a Pats uniform, picking up nine points.