PREVIEW: Pats hit the road Tuesday to take on Raiders in Prince Albert 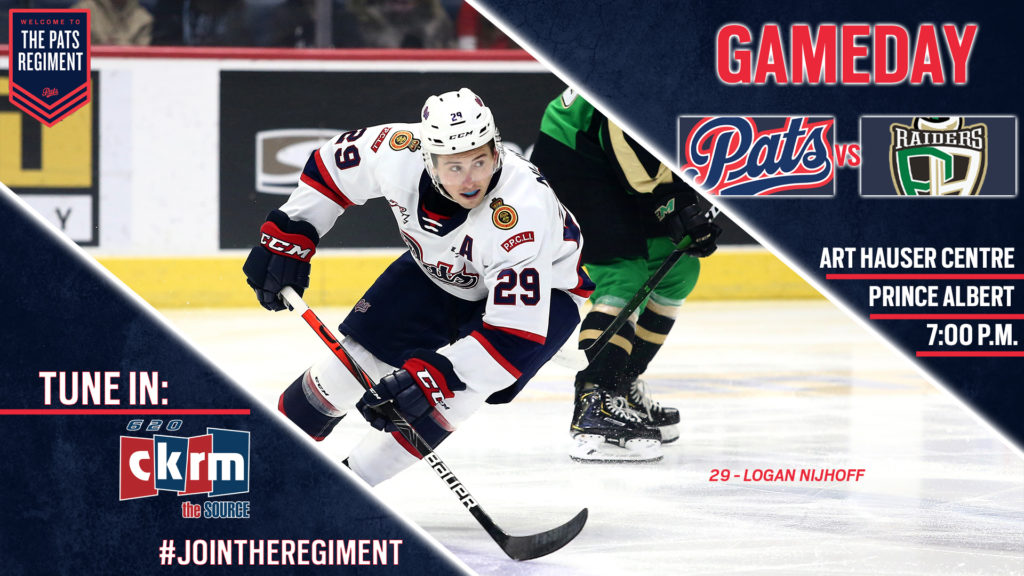 The Regina Pats (19-29-3-2) continue their busy week on Tuesday night when they hit the road to take on the Prince Albert Raiders (30-16-5-4). Puck drop is at 7:00 p.m. at the Art Hauser Centre. The Pats were last in action on Monday afternoon when they fell 2-1 at home to the Brandon Wheat Kings. The Raiders have been off since Saturday when they beat the Wheat Kings 4-1 on home ice. Tonight is the sixth and final meeting between Regina and Prince Albert, the Pats are 2-3-0-0 so far in the season series. The game can be heard with Bennett Dunlop Ford Pats Hockey starting at 6:35 p.m. on 620 CKRM.

Quick Facts
– The Pats have beat the Raiders in two straight but are 3-7-0-0 in the last 10 between the two clubs.
– The Pats are 4-3-0-0 in the month of February and have matched their win total from all of 2019-20 with 19 victories.
– Robbie Holmes leads Regina with eight career points in 23 games against Prince Albert.
– Drew Englot scored his 12th goal on Monday and leads all Pats rookies with 16 points.
– Regina is 6-3-0-0 in their last nine games.
– Cole Dubinsky played in his 100th WHL game on Monday against Brandon.
– Jake Johnson snapped a 17-game pointless streak with an assist against the Wheat Kings.

Rookie Year
Pats forward Drew Englot continued his strong rookie campaign with his 12th goal of the season on Monday against Brandon. The 17-year-old leads all Pats first year players with those 12 goals and 16 points in 46 games on the season. Nine of his 12 goals have come in the 17 games since the team returned from the Christmas Break. Englot’s 12 goals are tied for 11th among all rookies in the Western Hockey League and his three powerplay markers are also tied for 11th in the league.

100 Games
Pats forward Cole Dubinsky suited up for the 100th game of his WHL career on Monday afternoon against Brandon. The 17-year-old is enjoying a career season with five goals and 17 points in 48 games. He had five goals and nine points in 47 games last year as a rookie and also appeared in five games as a 15-year-old in 2017-18. For his career, Dubinsky has scored 10 goals and 28 points, scoring twice on the powerplay and has two game winners.

Last Pats Game
The Regina Pats dropped a tight 2-1 decision at home to the Brandon Wheat Kings on Monday afternoon at the Brandt Centre. Brandon outshot Regina 9-6 in the first, but both goaltenders were sharp and it was scoreless after 20 minutes. In the second, the Wheat Kings found the opening goal at 5:29 when Ben McCartney tipped in a point shot and it was 1-0 after two. In the third, Brandon went up 2-0 on a goal from Luka Burzan at 7:11. The Pats got back to within one at 17:19 when Drew Englot jammed in his 12th to make it a 2-1 game. Regina pulled Buskey for the extra attacker late, but Brandon held on for the 2-1 win. The Pats outshot the Wheat Kings 26-24, the powerplay went oh for five, the penalty kill one for one and Donovan Buskey made 22 saves.

Last Pats Game Vs Prince Albert
January 1, 2020 – Riley Krane had a goal and an assist, while Robbie Holmes scored the winner in the Pats 2-1 overtime win over Prince Albert at the Brandt Centre. Ozzy Wiesblatt scored the lone goal for the Raiders in the defeat. Max Paddock stopped 29 of 30 shots for the Pats, Boston Bilous made 16 saves for Prince Albert.