PREVIEW: Pats hit the road to take on the Broncos in Swift Current Friday 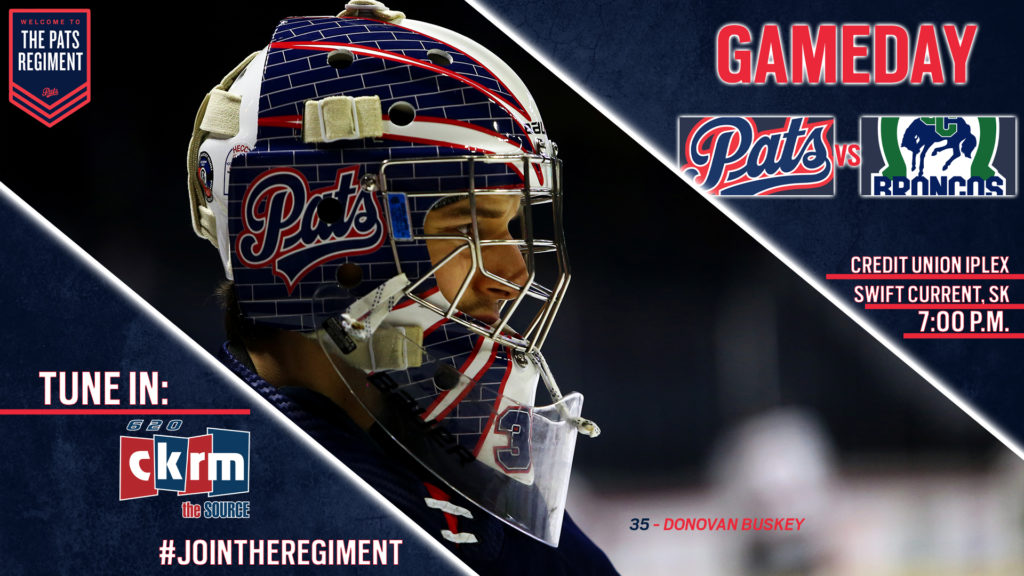 The Regina Pats (3-14-2-0) start a stretch of seven straight road games on Friday night when they visit the Swift Current Broncos (5-12-1-2). Puck drop is at 7:00 p.m. at Innovation Credit Union Iplex. The Pats are coming off a 4-2 loss at home to the Calgary Hitmen on Wednesday. The Broncos fell 6-2 on home ice Wednesday at the hands of the Lethbridge Hurricanes. Tonight is the second of six meetings between Regina and Swift Current in 2019-20, the Pats are 0-1-0-0 in the season series. The game can be heard with Bennett Dunlop Ford Pats Hockey starting at 6:35 p.m. on 620 CKRM.

Quick Facts
– The Pats and Broncos are meeting for the second time this season, Swift Current took the first meeting on Tuesday, 2-1 at the Brandt Centre.
– The Pats are 2-4-2-0 in their last eight games.
– The Pats are 1-6-2-0 against the Central Division so far this season.
– Ty Kolle recorded his fourth multi-point game of the year on Wednesday with a goal and an assist.
– Kyle Walker picked up an assist Wednesday to snap a nine-game pointless streak.
-Max Paddock has made 30 plus saves in six of his last eight starts.
-The Pats penalty kill has gone 17 for 21 in their last four games (80.9 per cent).

Kolle’s Strong Start
Pats 19-year-old forward Ty Kolle is off to a fast start offensively this season. The product of Kamloops, British Columbia has put up eight goals and 15 points in his first 19 games of the year. Kolle was acquired from the Lethbridge Hurricanes in 2018-19 and in 43 games with the Pats he had nine goals and 16 points. He is on pace to well surpass his career high in goals (16), assists (12) and points (28) this year. Kolle leads Regina with three powerplay goals and one game winner. His point totals are second on the team and tied for 63rd in the Western Hockey League.

Paddock’s Busy Stretch
Pats goaltender Max Paddock has started seven straight games since the Prairie Classic on October 27. The 19-year-old has put up a 1-4-2-0 record in that stretch, with a 3.83 goals against average and a .893 save percentage. Paddock has made 30 plus stops in five of those seven contests, once stopping over 40, on October 27.

Last Pats Game
The Regina Pats fell 4-2 at home to the Calgary Hitmen on Wednesday night at the Brandt Centre. In the first, the Pats got a goal from Austin Pratt, his team leading ninth, and it was 1-0 after one. In the second, the Hitmen tied it 15 seconds in on the powerplay. 24 seconds later, Ty Kolle potted his eighth to give the PatS the lead back at 2-1. Calgary responded with two goals from Mark Kastelic, the first on the powerplay, the second shorthanded and the Hitmen took a 3-2 lead to the third. Calgary would seal the victory with a goal late in the third from Riley Stotts, his eighth and Regina fell 4-2. The Pats were outshot 36-33, the powerplay was oh for five and the penalty kill went one for three. Ty Kolle led the Regina offence with a goal and an assist, while Max Paddock made 32 saves.