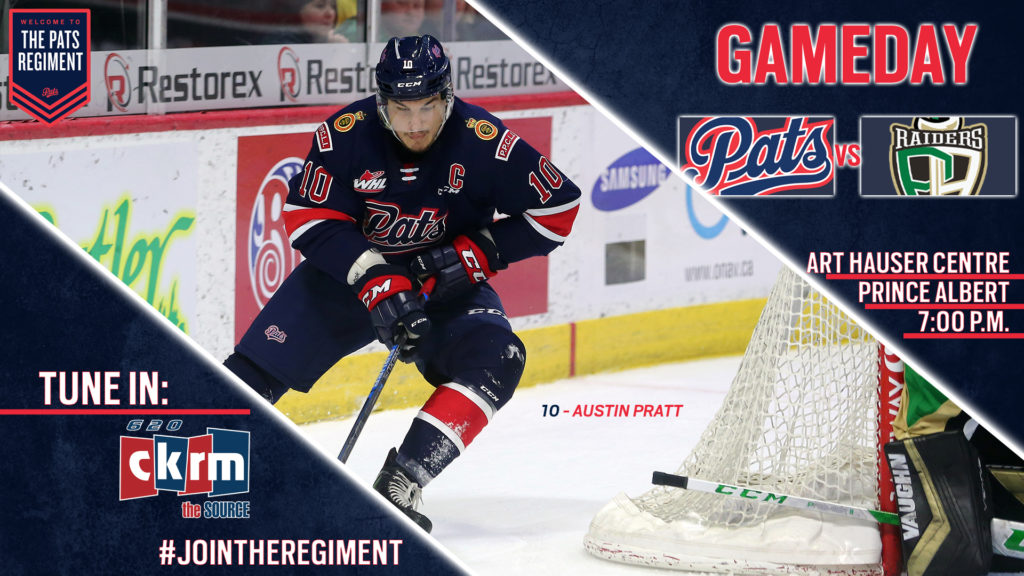 The Regina Pats (2-10-1-0) will hit the road on Friday night to take on the Prince Albert Raiders (9-2-3-0). Puck drop is at 7:00 p.m. at the Art Hauser Centre. The Pats were last in action on Sunday, outdoors at Mosaic Stadium, losing a 5-4 overtime thriller to the Calgary Hitmen. The Raiders last contest was on Saturday when they wrapped up their US Division road trip with a 4-1 win in Spokane. Tonight is the third of  six meetings between Regina and Prince Albert, the Pats are 0-2-0-0 in the season series. The game can be heard with Bennett Dunlop Ford Pats Hockey starting at 6:35 p.m. on 620 CKRM.

Quick Facts
-The Pats have picked up three of four possible points in their last two games.
-Austin Pratt, Logan Nijhoff and Ty Kolle are all riding four game point streaks entering Friday night.
-The Pats are 0-2-0-0 against Prince Albert so far this season.
-The Pats acquired forward Caiden Daley from Brandon on Tuesday in exchange for forward Duncan Pierce.
-Max Paddock returned to the lineup on Sunday, had missed the previous five games with injury.
-Zack Smith made his Pats debut on Sunday, was signed during the week out of the SJHL’s Melfort Mustangs.
-Nikita Sedov scored his first career WHL goal on Sunday against Calgary.

Pratt Rolling
Pats captain Austin Pratt carries a four-game point streak into Friday night in P.A. The overage forward has scored four goals and two assists in that stretch to reach seven goals and 14 points in 13 games on the year. Pratt leads the team in goals, points and shots on goal with 58. In the last four games, Pratt and his linemates Robbie Holmes and Ty Kolle, have combined to score eight goals and seven assists. The trio has scored 17 of the Pats 32 goals on the year (53.12%).

Pats acquire Daley
The Pats swapped 19-year-old forwards with the Brandon Wheat Kings on Tuesday, acquiring former first round pick Caiden Daley in exchange for Duncan Pierce. Both players hail from Winnipeg and have put up two assists in 10 games so far this season. Daley was drafted 22nd overall in the 2015 WHL Bantam Draft and has 18 goals and 56 points in 212 career games, all with the Wheat Kings. Pierce was listed and signed by the Pats in 2015 and played in 94 games with the Pats, scoring eight goals and 24 points.

Last Pats Game
The Regina Pats played a classic outdoor contest on Sunday at Mosaic Stadium, falling 5-4 in overtime in a back and forth affair with the Calgary Hitmen. In the first, the Pats got off a fast start with a goal 29 seconds in. Austin Pratt jammed home his team leading seventh to make it 1-0. The Hitmen responded with a shorthanded goal from Mark Kastelic and it was 1-1 after one. In the second, the Pats took the lead back when Robbie Holmes scored his fifth and it was 2-1. Calgary came back with a goal from Mark Kastelic and another from Jonas Peterick to take a 3-2 lead. The Pats drew even on a goal from Logan Nijhoff, his second, and it was 3-3. However, with 47 seconds left in the period, the Hitmen went ahead 4-3 and took that lead to the break. In the third, Nikita Sedov put home a rebound for his first career WHL goal and it was 4-4. The game needed overtime, 59 seconds in Carson Focht scored on a rebound and Calgary took the extra point in a 5-4 final score. The Pats were outshot 48-27, the powerplay was oh for four and the penalty kill was three for three. Austin Pratt, Robbie Holmes and Nikita Sedov led the offence with a goal and an assist each, while Max Paddock made 43 saves.

Last Pats Game Vs Prince Albert
October 5, 2019 –  Kaiden Guhle scored a goal and added three assists to lead the Prince Albert Raiders to a 6-0 home victory over the Pats. Zack Hayes, Jakob Brook, Ozzy Wiesblatt and Brayden Watts also chipped in with two-point nights for the Raiders. Danton Belluk started the game for the Pats, making 14 saves, Max Paddock came in, in relief and stopped 10 of 11. Boston Bilous made 13 saves for the shutout for P.A.