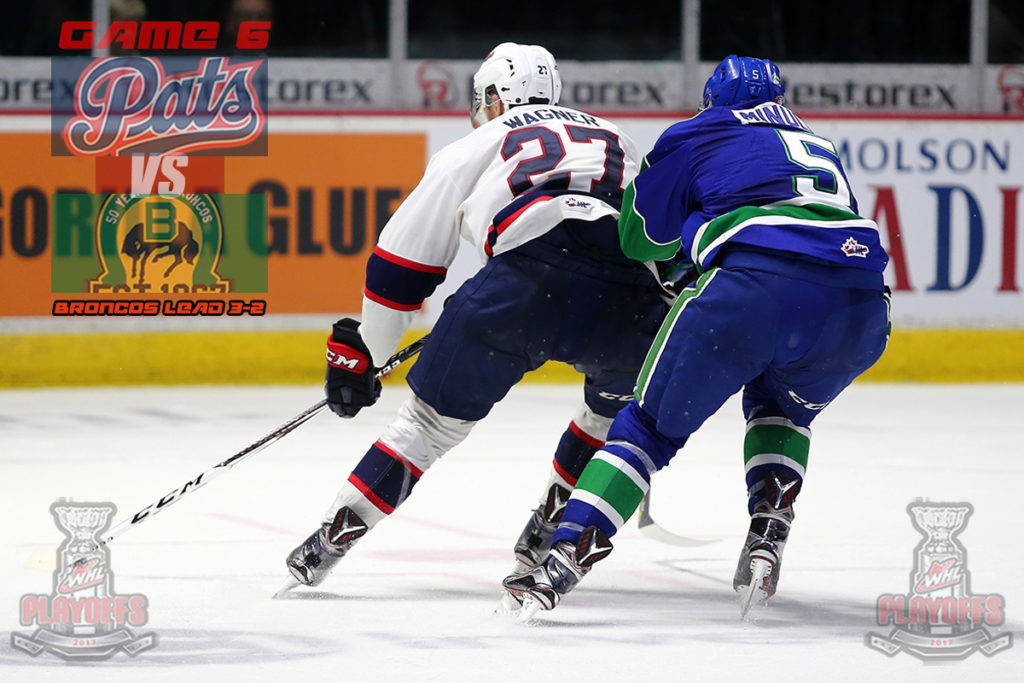 The Regina Pats (6-3) are on the road tonight for game six of their Eastern Conference semi-final series with the Swift Current Broncos (7-5). Puck drop at the Credit Union Iplex is at 7 p.m. The Pats forced the game six with a 3-2 win in game five on Friday night and trail the best-of-seven set, three games to two. The game can be heard on 620 CKRM with Bennett Dunlop Ford Pats Hockey beginning at 6:35 p.m. It will also be broadcast on Access 7.

Lead Up: Pats Force Game 6 with 3-2 Win Friday
The Regina Pats avoided elimination on Friday night with a 3-2 win at the Brandt Centre in game five over the Swift Current Broncos. The Broncos got the game’s first goal in the first period but Sam Steel responded on the poweprlay and it was 1-1 after one. In the second, the Pats took the lead when Connor Hobbs jammed home his third, early in the frame. Less than a minute after that, Nick Henry picked up his third and that was the difference in a 3-2 victory. The Pats now trail the best-of-seven set, three games to two. Regina outshot Swift Current 36-32, Tyler Brown made 30 saves for the Pats, Jordan Papirny 33 for the Broncos.

Series At A Glance
The Pats and Broncos split the first two games at the Brandt Centre, Swift Current then picked up two overtime wins on home ice in games three and four. Regina bounced back with a win in game five to extend the series. Regina has scored 15 goals while the Broncos have scored 13 times. The Pats have gone four for 20 on the PP and have killed 18 of 24 penalties. The Pats have outshot Swift Current 233 to 187 in five games to start the series. Dawson Leedahl leads Regina with five goals and two assists in the series. Sam Steel and Nick Henry each have put up six points while three other have four. Goaltender Tyler Brown is 2-0-3 with a 2.14 GAA and a .930 SV%. Swift Current’s Ryley Lindgren has scored three times and has three assists against the Pats. Tyler Steenbergen is next with five points while Aleksi Heponiemi and Colby Sissons each have four. Jordan Papirny is 3-2-0 with a 2.31 GAA and a .940 SV%.

Steel on the Board
Pats forward Sam Steel scored his first goal of the second round against Swift Current in game five on Friday night. Steel tied the game on the powerplay in the first with his fifth of the post-season. The Anaheim Ducks signed prospect is fifth overall in playoff scoring with 16 points in nine games, his 11 assists is tied for first. The Sherwood Park, Alberta product is riding a four game point streak entering Saturday night with one goal and five assists over that stretch.

First Goals
Game five was the first time in the series that the Swift Current Broncos scored the first goal in a game. The Pats had led 1-0 in each of the first four contests and won once for a one and three record. Dawson Leedahl leads the Pats with two first goals against the Broncos, Austin Wagner and Jonathan Smart have the others.