PREVIEW: Pats head to Medicine Hat to close out season series with the Tigers Saturday 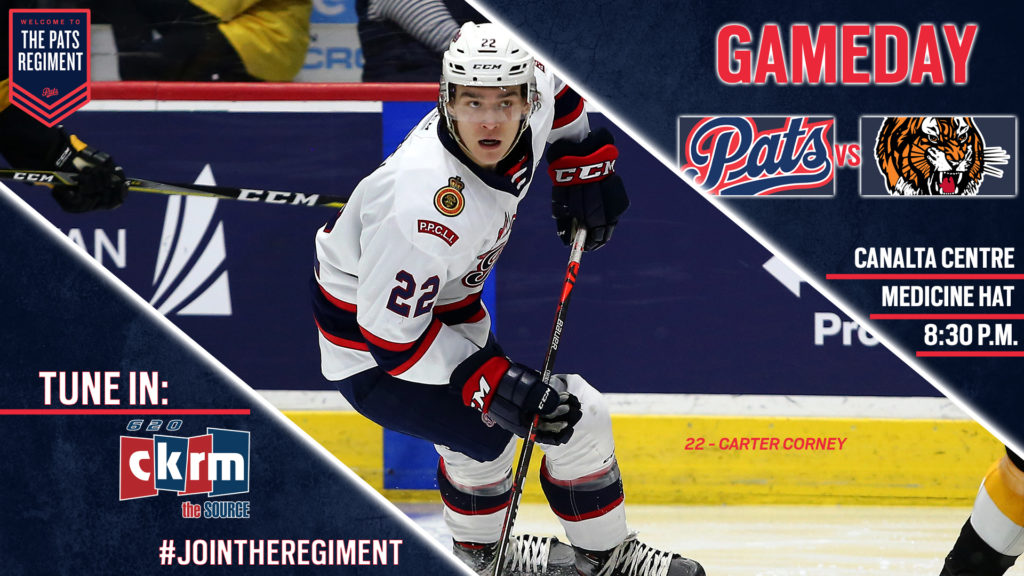 The Regina Pats (20-32-4-2) hit the road on Saturday night for the back half of a home and home set with the Medicine Hat Tigers (36-19-2-1). Puck drop is at 8:30 p.m. Regina time at the Canalta Centre. The Pats and Tigers met on Friday night at the Brandt Centre and Medicine Hat skated away with an 8-2 victory. Tonight is the fourth and final meeting of the year between Regina and Medicine Hat, the Pats are 0-3-0-0 so far in the season series. The game can be heard with Bennett Dunlop Ford Pats Hockey starting at 8:05 p.m. on 620 CKRM.

Quick Facts
– The Pats are 3-7-0-0 in their last 10 meetings with Medicine Hat, the Tigers have won seven in a row against Regina.
– Regina is 5-6-1-0 in the month of February.
– Austin Pratt leads the Pats with 12 points in 21 career games against Medicine Hat.
– Pratt is riding a six-game point streak, scoring three goals and five assists in that stretch.
– Donovan Buskey is 8-9-1-0 in his 18 starts since the WHL Trade Deadline.
– Sloan Stanick returned to the lineup on Friday after missing nine games with an upper-body injury.
– Logan Nijhoff has three points in his last two games, scoring a goal and adding two assists.
– The Pats re-assigned goaltender Spencer Welke to the Prince Albert Mintos on Friday, Ethan Hein has been loaned to Regina by the Calgary Hitmen as an emergency backup for Saturday night in Medicine Hat.

New Career High
Pats captain Austin Pratt picked up an assist in the second period on Friday night to reach a new career high for points in a season with 52. The 20-year-old has tallied 19 goals and 33 assists in 58 games this year. He is riding a six-game point streak entering Saturday night, scoring three goals and eight points in that stretch. The 20-year-old has played in 312 games in his WHL career, scoring 75 goals and 93 assists for 168 points. He has put up 103 points over the last two seasons with Regina.

Rookie Leader
Pats forward Zack Smith has taken over the team lead in rookie scoring thanks to a goal on Friday night against Medicine Hat. The 18-year-old has 11 goals and 17 points in 46 games, one more point than Drew Englot who has 12 goals and 16 points in 51 games to start his career. Smith has put up 74 shots on goal this season and won 205 faceoffs. He has a goal and an assist in his last three games played.

Last Pats Game
The Regina Pats dropped an 8-2 decision at home to the Medicine Hat Tigers on Friday night at the Brandt Centre. In the first, the Tigers found the game’s first goal at the 17:58 mark on the powerplay. Brett Kemp scored on a cross ice feed and it was 1-0 Medicine Hat after one. In the second, the Pats tied the game just over a minute in when Zack Smith picked up his 11th of the season. The Tigers responded with three goals after that and took a 4-1 lead into the second intermission. In the third, The Tigers scored four more goals, the Pats lone marker came on the powerplay, Logan Nijhoff with his 14th and Medicine Hat took the two points in an 8-2 final score. The Pats were outshot 40-20, the powerplay was one for four and the penalty kill three for six, while Donovan Buskey made 32 saves.

Last Pats Game Vs Medicine Hat
February 28, 2020 – Bret Kemp scored four times while Cole Sillinger had a goal and two assists in an 8-2 win for Medicine Hat at the Brandt Centre. Zack Smith and Logan Nijhoff scored the goals for the Pats. Mads Soogard made 18 saves for the Tigers, Donovan Buskey 32 saves for Regina.