PREVIEW: Pats head to Medicine Hat for final meeting of 2018-19 with Tigers 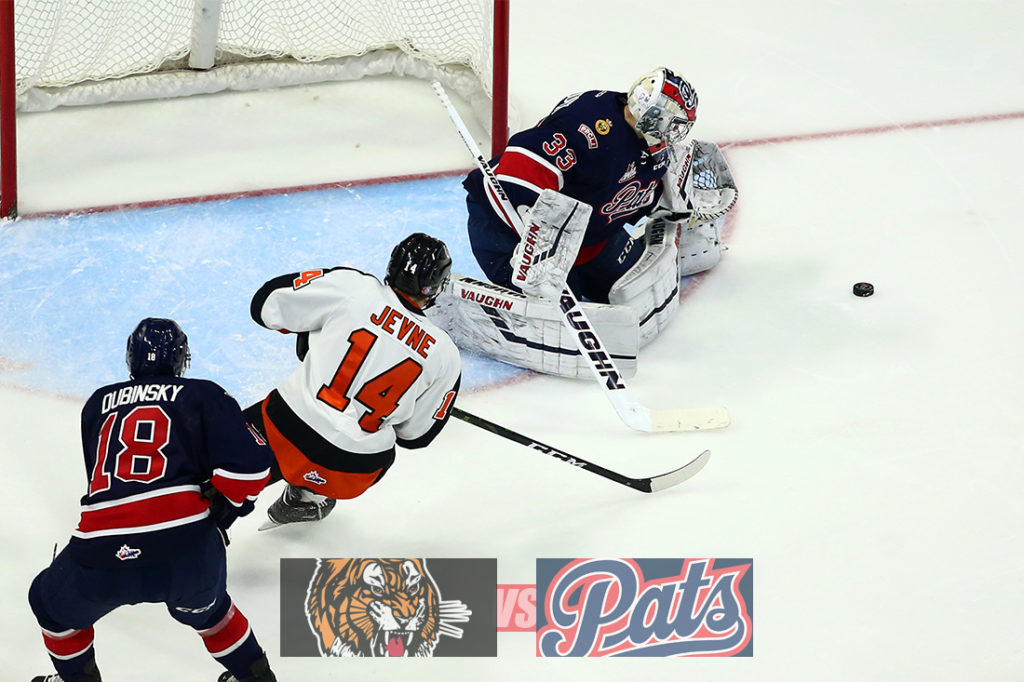 The Regina Pats (12-28-1-1) are looking to put an end to a five-game losing streak on Friday when they visit the Medicine Hat Tigers (22-16-1-2). Puck drop is at 8:30 p.m. Regina time at the Canalta Centre. The Pats were last in action at home on Wednesday, dropping a 5-2 decision to the Portland Winterhawks. The Tigers were last in action on Saturday in Calgary and lost 4-3. Tonight is the fourth and final meeting between the Pats and Tigers during the 2018-19 season, Regina is 0-3-0-0 so far in the season series. Tonight’s game can be heard with Bennett Dunlop Ford Pats Hockey starting at 8:05 p.m. on 620 CKRM.

The Lead Up: Pats fall 5-2 to Winterhawks Wednesday
The Regina Pats fell 5-2 on home ice to the Portland Winterhawks on Wednesday night at the Brandt Centre. The Winterhawks scored twice in the first period to lead 2-0 after one and then added another early in the second to take a 3-0 advantage. The Pats broke through late in the frame when Austin Pratt chipped in a rebound for his 16th of the season and 100th career Western Hockey League point. Regina trailed 3-1 after two. In the third, Portland restored their three-goal lead at the 2:51 mark, but Liam Schioler got the Pats back to within two when he hammered home his fourth to make it a 4-2 contest. Regina pulled Dean McNabb for the extra attacker late but the Winterhawks would score into the empty net and take the game in a 5-2 final. The Pats were outshot 35-26, the powerplay was oh for two, the penalty kill two for two and Dean McNabb made 30 saves.

Pats acquire Sloan Stanick, two picks from Everett for Robbie Holmes
The Regina Pats acquired 15-year-old prospect Sloan Stanick, a second-round pick in 2020 and a sixth-round pick in 2022 from the Everett Silvertips in exchange for 19-year-old forward Robbie Holmes ahead of Thursday’s WHL trade deadline. Stanick (5’9, 152) from Rapid City, Manitoba was drafted by the Everett Silvertips in the seventh round of the 2018 WHL Bantam Draft. This season, in his first year of Midget with the Yellowhead Chiefs, Stanick has scored 12 goals and has 12 assists for 24 points in 31 games. Holmes was drafted in the 11th round of the 2014 WHL Bantam Draft by the Pats. He has put up nine goals and 16 points in 24 games this year.

100 Career Points
Pats forward Austin Pratt recorded the 100th point of his Western Hockey League career on Wednesday against the Winterhawks. The 19-year-old scored the Pats opening goal of the game late in the second, his 16th of the season, to reach the milestone. Pratt leads Regina in scoring so far this year with 16 goals and 34 points in 42 games. His 34 points have tied a career high, set back in 2016-17 with the Red Deer Rebels when he also had 16 goals and 18 points in 70 games. Pratt is on pace to finish the year with 55 points in 68 games. In his career, Pratt has scored 47 goals and has 53 assists in 228 games played.

Schioler Red Hot
Pats defenceman Liam Schioler is enjoying his best offensive stretch of his Western Hockey League career. The 20-year-old has scored three goals in his last six games to reach four goals on the year. Prior to the Christmas break, Schioler had scored just twice in his first 204 games, but has broken out with three more since the break. For his career, the Winnipeg product has five goals and 24 assists for 29 points to go along with 176 penalty minutes. He was drafted in the second round of the 2013 WHL Bantam Draft and is in his fourth season in Regina.

First for Feist
Defenceman Tyson Feist recorded his first point in a Pats uniform on Wednesday against the Winterhawks. The 17-year-old picked up an assist on Austin Pratt’s goal late in the second period. Feist was acquired from the Spokane Chiefs on Thursday last week and has appeared in four games with the Pats so far. The product of Dawson Creek, B.C. has put up six assists in 29 games this season.