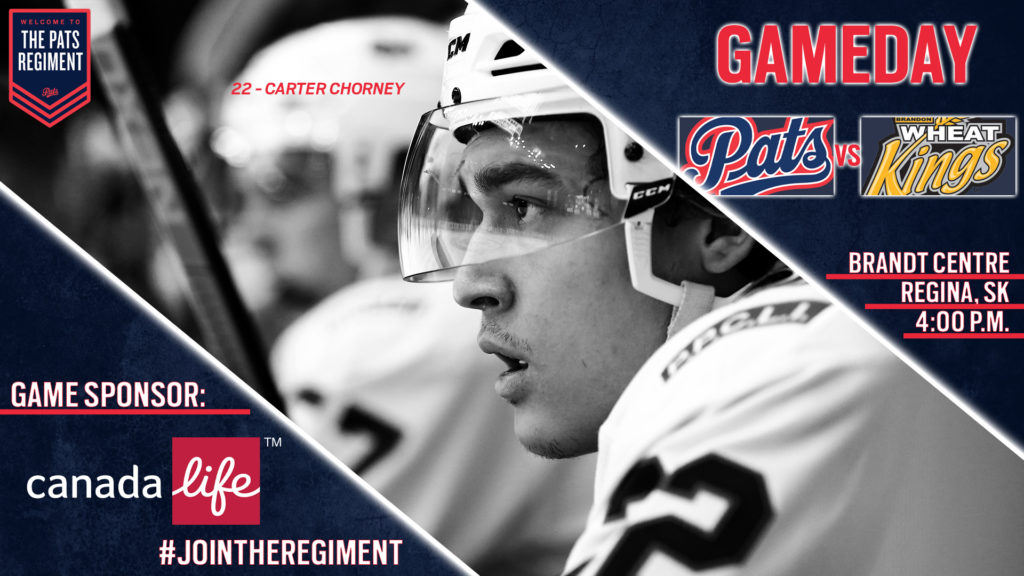 The Regina Pats (11-20-3-2) will play their third game in three days and fifth in seven nights on Sunday when they host the Brandon Wheat Kings (18-17-1-2). Puck drop is at 4:00 p.m. at the Brandt Centre. Pats are coming off a 5-4 shootout loss at home to Swift Current on Saturday night. The Wheat Kings were last in action on Friday, winning a third straight game, 1-0 over Prince Albert. Tonight is the fourth of six meetings between Regina and Swift Current this year, the Pats are 1-2-0-0 so far in the season series. The game can be heard with Bennett Dunlop Ford Pats Hockey starting at 3:35 p.m. on 620 CKRM.

Quick Facts
– The Pats are 5-1-0-2 in their last eight meetings with the Wheat Kings, winning three straight home games.
– The Past are 1-1-0-0 against Brandon this year, with both games being played on the road.
– Drew Englot has goals in back to back games for the first time in his WHL career.
– Zach Wytinck had three points Saturday to jump into a tie for fifth among all WHL defencemen with 30 points, his 25 assists are tied for third most.
– Carson Denomie leads Regina with eight powerplay goals and 16 powerplay points on the season.
– Austin Pratt is third in the WHL with 164 shots on goal.
– The Pats are 3-2-0-1 in six games since the Christmas Break.

Three Point Nights
Pats forwards Robbie Holmes and Carson Denomie as well as defenceman Zach Wytinck each had three points in the club’s shootout loss to Swift Current on Saturday. For Denomie, it was the first three-point game of his WHL career. He is fourth on the club with 28 points this year, which is a career high. Holmes hit the three-point mark for the third time in his career, all three have come this season. He is third on the team with 29 points, which is tied for his career high for a season. Holmes is one goal away from matching his previous career high of 16 goals. Finally, for Wytinck it was the fourth time in his career and third three plus point game this season. Wytinck has put up 13 points in his last 10 games and sits just one point back of Austin Pratt for the team lead in scoring with 30 points on the season.

Last Pats Game
The Regina Pats earned a point in a 5-4 shootout loss at home to the Swift Current Broncos on Saturday night at the Brandt Centre. In the first, Carson Denomie opened the scoring for the Pats at the 1:26 mark. His 10th of the season on a wraparound and it was 1-0. The Regina powerplay extended the lead halfway through the frame, Denomie with his second of the night, 11th of the year and it was 2-0 after one. In the second, the Broncos got goals from Eric Houk and Garrett Sambrook to tie the game at two heading to the third. The Broncos added two more in the opening nine minutes of the third to open up a 4-2 lead. The Pats powerplay responded at 11:01 on a goal from Drew Englot, his sixth and it was 4-3. It stayed that way until late when the Pats went to another powerplay and pulled Max Paddock for the extra attacker. Zach Wytinck would slap home his fifth with 1:22 remining to tie the game at four and force overtime. No goals were scored in the extra frame and Ethan Regnier scored the lone goal of the shootout as the Broncos took the extra point in a 5-4 final.

Last Pats Game Vs Brandon
December 30, 2019 – Cole Dubinsky scored the lone goal for Regina in a 4-1 road defeat at the hands of the Wheat Kings. Ben McCartney led the way for Brandon with a goal and two assists. Max Paddock made 29 saves for the Pats, Jiri Patera stopped 34 of 35 for the Wheat Kings.