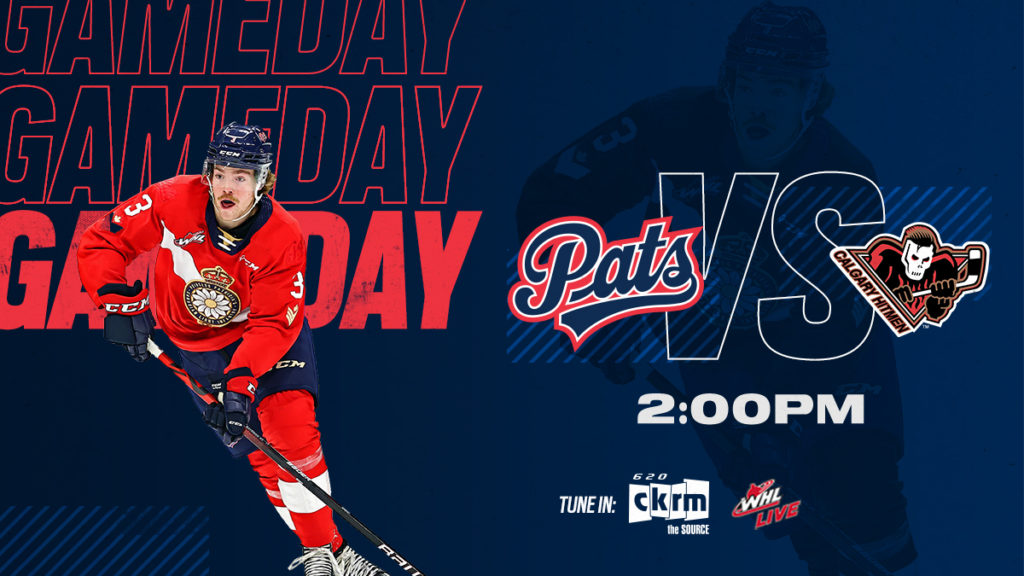 Calgary, Alta. – The Regina Pats wrap up their three game Alberta road trip today at 2:00 p.m. against the Calgary Hitmen at the Scotiabank Saddledome.

The Pats are coming off a tough 4-2 loss in Red Deer on Saturday, which snapped the clubs two game winning-streak. The Pats tied the game late in the third, but allowed the Rebels to take the lead shortly after, which proved to be the difference.

Borya Valis and Easton Armstrong scored the Pats goals, while Matthew Kieper made 19 saves in his season debut. The final shots were 36-23 for Regina, as they have now outshot their opponent in four straight games. The Pats went 1-6 on the power play and 6-7 on the penalty kill. The Regiment now sits with a 2-2 record with four points, which is currently tied for fifth in the WHL.

Through four games, Connor Bedard still leads the team in points (8) and goals (5), but quietly, Easton Armstrong has recorded a point in three of the teams first four games, totaling four points (2G-2A).

On the other side, the Calgary Hitmen are 1-0-0-1 on the season with three points. Calgary is coming off 3-2 shootout loss to Swift Current at home after a 2-1 victory against the Broncos on the road to begin the season last week. Oliver Tulk and Billal Noori scored for the Hitmen in their shootout loss last game. The final shots were 37-21 for the Broncos, with the Hitmen going 0-4 on the power play and 4-5 on the penalty kill.

This season, the Hitmen will be relying again on goaltender Ethan Peters who was spectacular in net last season, posting a .906 save percentage in 47 contests. Up front, the Hitmen have Riley Fiddler-Schultz (65GP-28G-41A-69PTS) and Sean Tschigerl (65GP-23G-35A-58PTS) who each scored at more or close to a point per-game last year. Friday, the Hitmen acquired 20-year-old forward Jacob Wright from the Everett Silvertips, and he will be a welcomed addition to their offence as he netted 22 goals last season.

The Calgary Hitmen are coming off a 25-34-7-2 season with 59 points, which was tied for ninth in the Eastern Conference standings with Regina and Swift Current, missing the playoffs by two points. The Hitmen were last in the playoffs in the 2018-19 season when they lost in the conference-semis, as they were swept by Edmonton.

3: Last night in Red Deer, Matthew Kieper got the start, allowing three goals on 22 shots, as he becomes the third goaltender to start in a game for the Pats this season joining Drew Sim and Koen MacInnes. Sim leads the group with three appearances.

4: Borya Valis (3G-3A) is the only player on the Pats roster to have recorded at least a point in all four games this season…Valis’ six points is tied for sixth in the league…his four game point-streak ties his career high set last year (11-12 -11-23, 1G-4A).

8: Number of points (5G-3A) in four games for Pats captain Connor Bedard leads the WHL, while his five goals are second…last season, he produced 100 points (51G-49A) in 62 games, finishing fourth in points and second in goals…also currently on a three game point-streak.

81.8%: Penalty kill percentage through four games despite allowing at least one powerplay goal in each of their first four games of the season… they have also now scored a powerplay marker in back-to-back games, as the power play is 2-15 overall at 13.3%.

.857: Total team save percentage by the Pats to start the season, allowing 15 goals on 105 shots…the Pats have outshot their opponents