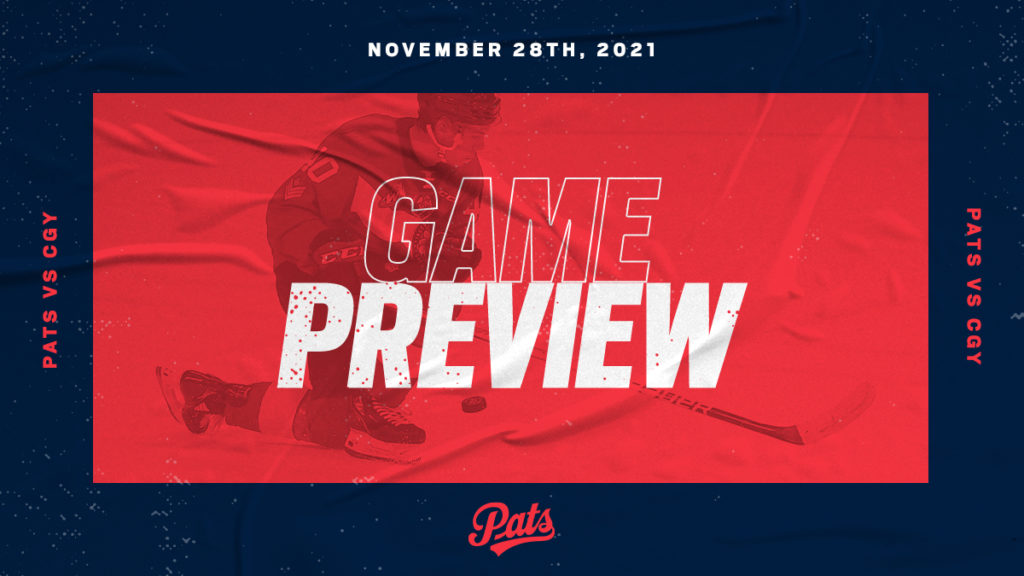 The Pats had their three game winning-streak come to an end on Saturday night, as they suffered a 4-2 loss to the Red Deer Rebels. The Pats streak of four straight wins on the road also comes to an end as well. Ryker Evans tallied a goal and an assist for his sixth multi point effort of the season, while Borya Valis scored his third, and Stanislav Svozil and Cole Dubinsky recorded assists in the loss. Drew Sim made his second start of the season, making 29 saves on 33 shots.

On the other side – the Calgary Hitmen are coming off a 7-0 win over the Saskatoon Blades on Saturday afternoon, with their seven goals for being the most by the club this season, as they snap their two game skid. Five different Hitmen tallied multi-point efforts, with Sean Tschigerl (3G-1A) and Maxim Muranov (2G) leading the way. They are 4-4-0 in the month of November, outscoring opponents 26-to-23 during that time…they have also won their last three home games coming into today’s action.

This will mark the first of six meetings this season.

This will be the first of four meetings this season, with the next three meetings being played in the second half. These two teams last met on February 12th, 2020, with the Hitmen defeating the Pats 8-1 in Calgary. The Pats went 0-3-1 against the Hitmen in the 2019-20 season, with their last win coming on February 22nd, 2019, winning 5-4 in overtime at home. The Pats have dropped the last three meetings at Saddledome.

21: Number of points (4G-17A) for Regina Pats defenceman Ryker Evans is tied for second amongst defenceman in in the WHL, while his 17 assists are third…his seven power play assists ranks fifth…he has points in seven of his last 10 games (3G-10A-+5).

105: Shots on goal for Regina Pats forward Connor Bedard leads the WHL…the North Vancouver native is averaging 5.25 shots on net per contest along with 10 goals and 15 points in 20 games…he has 4G-1A over his last six games and had his three game point-streak snapped last game.

297: Faceoff wins for Pats captain Logan Nijhoff is the second highest total in the WHL behind of Prince Albert’s Reece Vitelli (300)…he went 13-24 on the faceoff dot on Saturday in Red Deer and holds 57.1 faceoff win percentage this season.

947: Save percentage and 1.95 GAA for Regina Pats goaltender Matthew Kieper over his three game winning-streak…the Winnipeg, Manitoba native is ranked a C level prospect by NHL Central Scouting and ranks third in the WHL in minutes (1021) and fourth in saves (457).