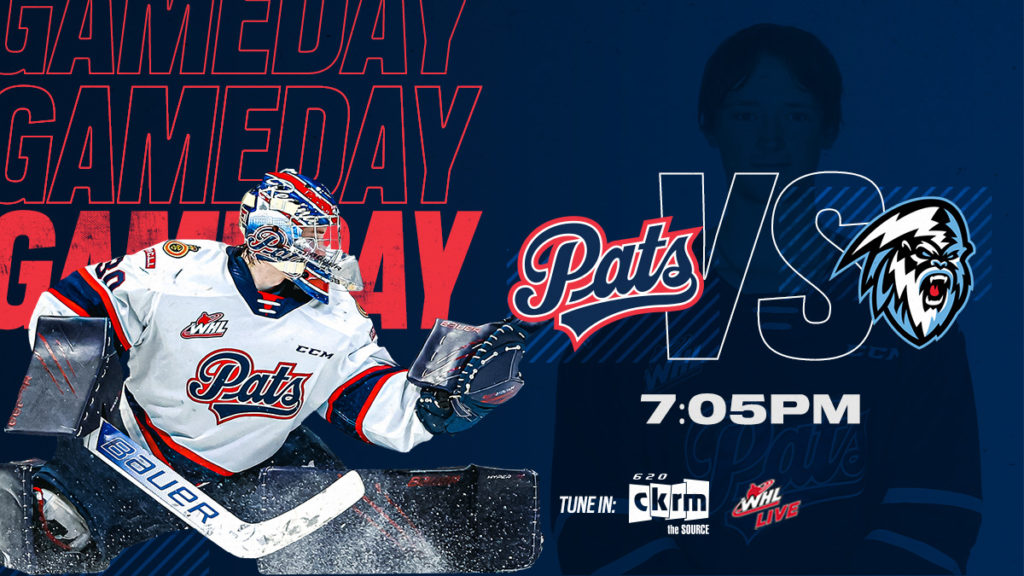 Regina, Sask. – The Regina Pats continue their road stretch tonight in Winnipeg against the ICE at 7:05 p.m. inside the Wayne Fleming Arena.

The Pats are coming off a 5-2 loss in Saskatoon against the Blades to begin their 10 game road swing. The Pats trailed 3-0 in the second and 3-1 after two. Connor Bedard and Alexander Suzdalev scored for Regina in the loss. Drew Sim made 22 saves on 26 shots. The Pats outshot the Blades 34-27 in the game, while going 1-4 on the power play but just 1-3 on the penalty kill.

Meanwhile, the Winnipeg ICE are coming off an 8-3 victory Saturday over the Brandon Wheat Kings. Zach Benson scored twice while Connor McClennon, Conor Geekie, Aiden Oiring, Skyler Bruce, Owen Pederson and Vladislav Shilo also found the back of the net extending Winnipeg’s winning streak to 13 games. The ICE went 2-7 on the power play and scored two shorthanded goals while improving their record to 18-1. Daniel Hauser made 32 saves. The ICE have a 6-0 record on their current 10 game homestand.

The ICE are first in the WHL with a 18-1-0-0 record and 36 points. They have scored seven goals or more in back-to-back games with 15 goals over that time. They have allowed two or less in nine of their 19 games this year.

It’s the second of six meetings this season between the Pats and ICE. The last time these two clubs met it was on October 7, with Winnipeg beating Regina 5-2 at the Brandt Centre. The Pats were outshot 35-23 in that game, with Jaxsin Vaughan and Connor Bedard scoring the only goals for Regina. The Pats were 0-4 on the power play and 4-4 on the penalty kill.

43: Number of points (18G-25A) in 20 games for Pats captain Connor Bedard leads the WHL, while his 18 goals are first, and his 25 assists are also first…the North Vancouver, BC product is on a 19 game point-streak, with all 43 points over his last 19 games.

4: Career-high four points on Friday in Swift Current against the Broncos for forward Alexander Suzdalev (1G-3A)…the Washington Capitals 2021 third-round pick has points in six straight (4G-8A-12PTS)…his 7 PPG goals are tied for first in the WHL.

6: Points over Tanner Howe’s last two games (2G-4A), as he takes a two game point-streak into action today…the Prince Albert, Sask. product has 26 points (9G-16A) in 19 games this season which is tied for 11th in WHL scoring.

12: Power play goals for the Regina Pats over their last eight contests, having scored at least one power play marker in eight straight…during that time, the Pats man-advantage has gone 12-for-36, running at 33.3%…overall, the Pats power play is T-11th in the WHL at 22.9%.

6: Goals since coming back from injury for Borya Valis who has scored in four of his last seven games with six goals and three assists for nine points during that time…on  last Wednesday vs. Edmonton, the Denver, Colorado product recorded a career-high four points, as well as his first career hat-trick.