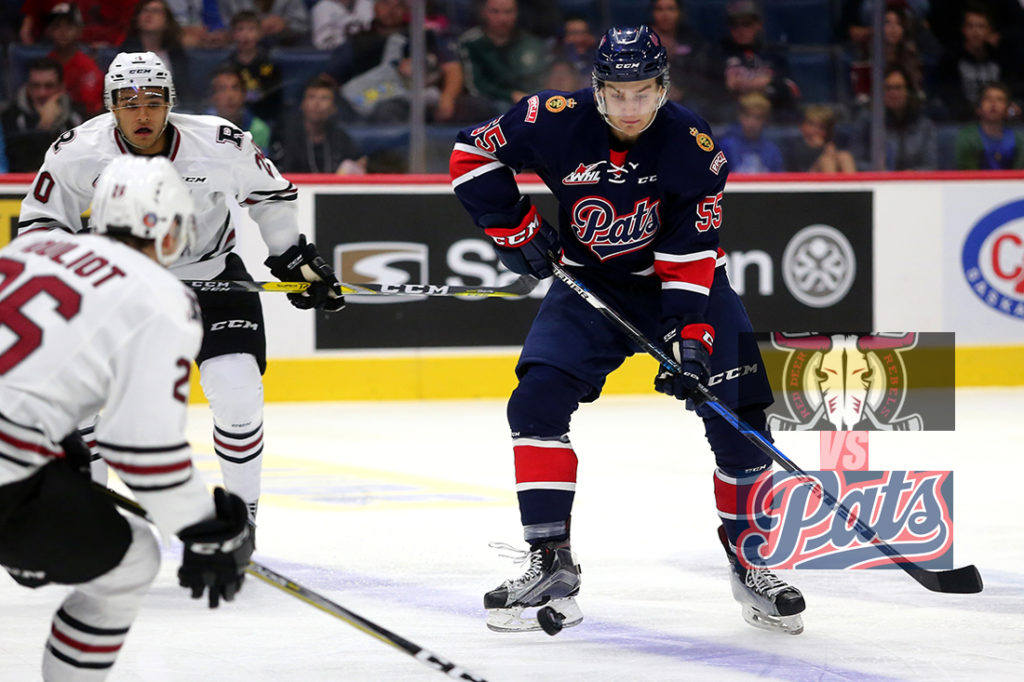 The Regina Pats (8-21-0-0) continue their Central Division road trip on Friday night against the Red Deer Rebels (17-9-2-0). Puck drop is at 8:00 p.m. Regina time at the Enmax Centrium. The Pats were last in action on Wednesday night in Edmonton, dropping a 6-1 decision to the Oil Kings. The Rebels have been off since Sunday when they lost 5-4 in overtime in Lethbridge to the Hurricanes. Tonight is the first of four meetings between Regina and Red Deer, the Pats went 3-0-1-0 against the Rebels last season. Tonight’s game can be heard with Bennett Dunlop Ford Pats Hockey starting at 7:35 p.m. on 620 CKRM.

The Lead Up: Pats drop 6-1 decision in Edmonton Wednesday
The Regina Pats fell 6-1 to the Oil Kings on Wednesday night at Rogers Place in Edmonton. The Pats got the game’s first goal when Riley Krane buried a shot from an impossible angle at the left goal line for his fourth of the year. Steven Zonneveld and Kyle Walker drew assists and the Pats led 1-0 eight minutes in. The Oil Kings found a tying goal with 13 seconds left in the period, Trey Fix-Wolansky with the goal and it was 1-1 after one. In the second, the Oil Kings scored once on the powerplay and once even strength to lead 3-1. They would add three more in the third and take the two points in a 6-1 final. The Pats were outshot 38-25, the powerplay was oh for three, the penalty kill two for five and Max Paddock made 32 saves.

Success in Red Deer
The Regina Pats have enjoyed consistent success on the road against the Rebels over the last three seasons. Since the start of the 2015-16 year, Regina has gone 4-1-1-0 at the Enmax Centrium against their conference rivals. The Pats went 1-0-1-0 in Red Deer in 2017-18, 2-0-0-0 in 2016-17 and 1-1-0-0 during the 2015-16 season. The Pats have scored 19 goals in that stretch and given up 14 goals. Despite the Pats picking up nine of a possible 12 points in the last six games in Red Deer, it has been in tightly played contests. Two of the Pats wins came by one goal, one of those in overtime. Regina has also won by two and three goals in the other two. Conversely the Rebels two wins have come by a single goal, one in regulation and one in overtime. In the last four seasons, home and away, Regina is 10-3-2-1 against Red Deer.

Pratt’s Return
Pats leading scorer Austin Pratt will play against his former team tonight for the first time since the Pats acquired him from Red Deer in December of 2017. The 19-year-old played his first two and a half seasons in the WHL with the Rebels, playing in 165 games. He scored 31 goals and had 31 assists for 62 points with Red Deer and appeared in 15 playoff games. Pratt is enjoying a career year this season, he has 11 goals and 25 points in 29 games, on pace for 26 goals and 59 points. His previous career high was 16 goals and 34 points set in 2016-17 with Red Deer.

Walker Back to Back
Pats defenceman Kyle Walker has recorded points in back to back games for the first time in his Western Hockey League career. The 18-year-old picked up an assist on Sunday against Medicine Hat and then added another on Wednesday in Edmonton. Walker was acquired from Everett earlier this season and in 12 games with Regina, has three assists.