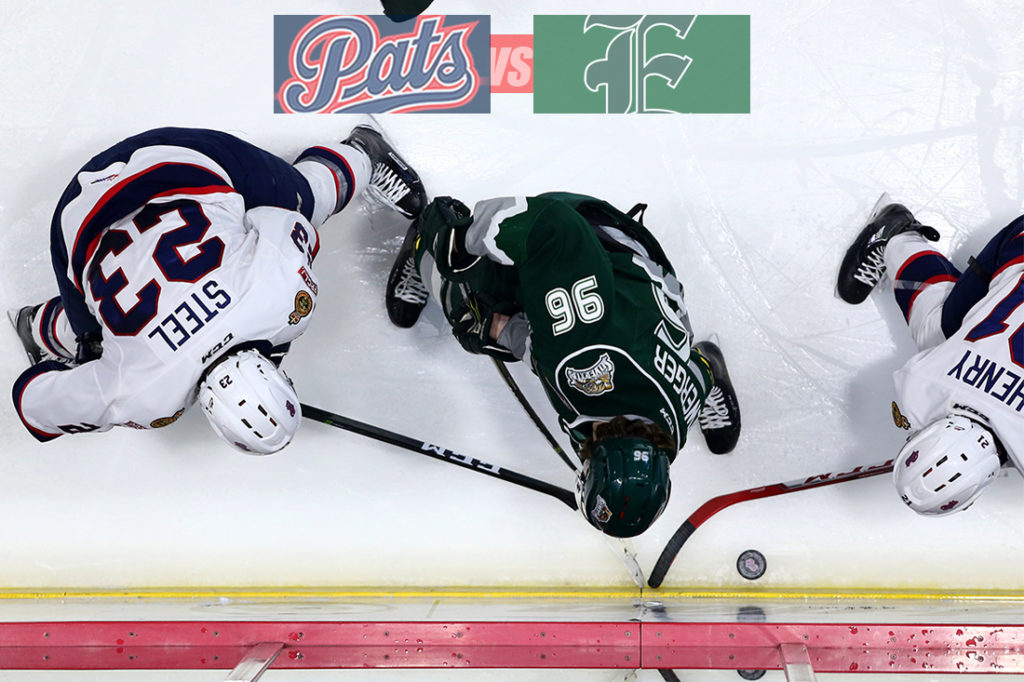 The Regina Pats (12-9-2-0) continue their U.S. Division road trip on Sunday in Everett against the Silvertips (10-11-1-1). Puck drop is at 6:00 p.m. Regina time at Xfinity Arena. The Pats kicked off their road trip on Saturday night with a 3-1 loss in Portland to the Winterhawks. The Silvertips were in Seattle on Saturday and lost 2-0 to the Thunderbirds. Tonight is the first and only meeting between the two clubs in 2017-18. The game can be heard starting at 5:35 with Bennett Dunlop Ford Pats Hockey on 620 CKRM.

The Lead Up: Pats lose hard fought battle in Portland Saturday
The Regina Pats kicked off their U.S. Division road trip with a 3-1 loss in Portland to the Winterhawks on Saturday night. Portland got the game’s first goal off the stick of Cody Glass, 3:46 into the opening period. Sam Steel got Regina even five minutes later when he picked up his seventh of the season and it was 1-1. However a Portland powerplay gave the Winterhawks the 2-1 lead at 12:19 of the first and that was the score through 20 minutes. There were no goals in the second and it wasn’t until 19:46 of the third that the Winterhawks scored an empty netter to make it 3-1 and that was the final score. The Pats were outshot 31-28 in the defeat, the powerplay was oh for one and the penalty kill two for three. Tyler Brown made 28 saves for the Pats, Cole Kehler 27 for the Winterhawks.

Head to Head
The Silvertips beat Regina in their lone meeting of the 2016-17 season, 4-2 at the Brandt Centre. Six Pats had single points in the defeat while Everett was led by Noah Juulsen, Brian King and Devon Skoleski who each had two points. Regina had won the previous five meetings between the two clubs. The Pats enter Sunday, 10 points back of Moose Jaw who are first in the East Division. Everett is currently eight points back of the Portland Winterhawks who lead the U.S. Division with 30 points in the standings.

Fleury on the Board
Pats defenceman Cale Fleury picked up his first point in a Pats uniform on Saturday night in Portland. The Montreal Canadiens prospect picked up an assist on Sam Steel’s seventh of the year in the first period. Fleury, in two games with Regina, has one point, is even and has four shots on goal to go along with two penalty minutes. His 11 points for the season ranks 33rd among all WHL defenceman and his six goals is tied for sixth.

Back to Back
Pats captain Sam Steel has scored goals in consecutive games this week. The Anaheim Ducks prospect scored on Wednesday night in the Pats win over Calgary 4-3. He followed that up with the lone Regina goal in Portland on Saturday night. The 19-year-old is up to seven goals on the season, three of which have come in his last four games. Steel has points in four of five contests, scoring three goals and adding two assists in that stretch.