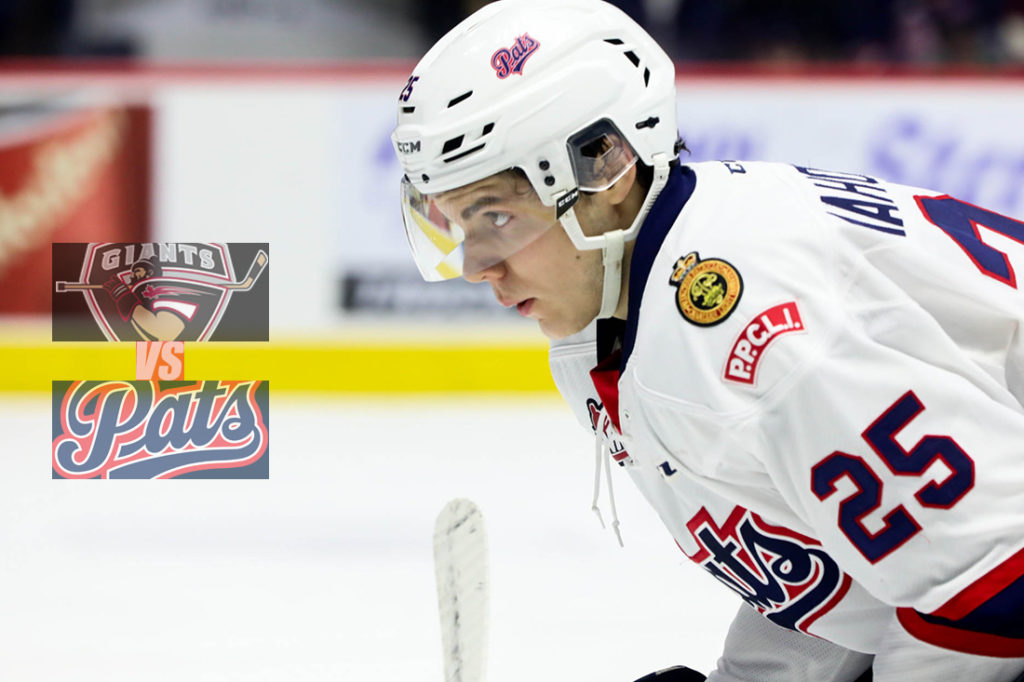 The Regina Pats (7-13-0-0) continue their season long six-game road trip tonight in Langley, B.C. against the Vancouver Giants (13-4-2-0). Puck drop is at 9:30 p.m. Regina time at the Langley Events Centre. The Pats started their road trip on Tuesday with a 5-2 loss to the Kootenay ICE, which snapped a three-game win streak. The Giants were last in action on Sunday, falling 1-0 to the Prince George Cougars. Tonight is the first and only meeting of the 2018-19 season between the Pats and Giants. Tonight’s game can be heard with Bennett Dunlop Ford Pats Hockey starting at 9:05 p.m. on 620 CKRM.

The Lead Up: Pats win streak halted in Kootenay Tuesday
The Regina Pats saw their three-game win streak come to an end on Tuesday night in a 5-2 loss to the Kootenay ICE. The ICE opened the scoring 2:46 in when Martin Bodak wristed home his fifth of the year from the right circle. The Pats tied it up at the seven-minute mark, Sebastian Streu tipped in a Kyle Walker point shot for his first goal in his first game and it was 1-1 after one. Goaltender Max Paddock was forced to leave the game in the first after taking a hit in the crease and Dean McNabb replaced him at the eight-minute mark. In the second, the ICE scored twice, 18 seconds apart to lead 3-1 early in the period. Austin Pratt got one back to the Pats 33 seconds later, his 10th of the campaign and Regina trailed 3-2 after 40 minutes. In the third, the ICE got two more, one even strength and one on the four on three powerplay to lead 5-2 and that was the final score. The Pats outshot Kootenay 40-33 in the loss, the powerplay was oh for four and the penalty kill six for seven.

First Game, First Goal
Pats forward Sebastian Streu scored his first goal of the season in his first game with the Pats on Tuesday against his former team, the Kotoenay ICE. The 19-year-old tipped in a point shot in the first period to tie the game 1-1. Streu was listed and added to the Pats roster early this week after starting the year with the Vernon Vipers of the BCHL. He had seven points in 10 games with the Vipers. Last season with the ICE, Streu put up nine goals and 12 points in 54 games.

First Point as a Pat
Defenceman Kyle Walker recorded his first point in a Pats uniform on Tuesday night against the ICE. The 18-year-old was acquired late last week from the Everett Silvertips in exchange for a fifth-round pick in the 2019 WHL Bantam Draft. Walker’s assist on Tuesday came in the first period on a goal from Sebastian Streu. Walker has appeared in three games with Regina since the trade, he has one assist and has gone plus-1. In 67 career games, Walker has one goal and seven points in the WHL.

Captain Streak Continues
Pats captain Jake Leschyshyn extended his point streak to eight games on Tuesday with an assist in the second period. The 19-year-old signed prospect of the Vegas Golden Knights has put up eight goals and six assists for 14 points in those eight games. Leschyshyn has put up four multi-point nights in his streak, twice with three points and two others with two points. For the season, Leschyshyn leads the Pats with 13 goals and his 25 points is second on the squad, behind only Nick Henry who has 29 points. Leschyshyn ranks 18th in Western Hockey League scoring with 25 points and his 13 goals are tied for ninth. His eight powerplay goals are second in the WHL, only the Brandon Wheat Kings Stelio Mattheos has more with nine.