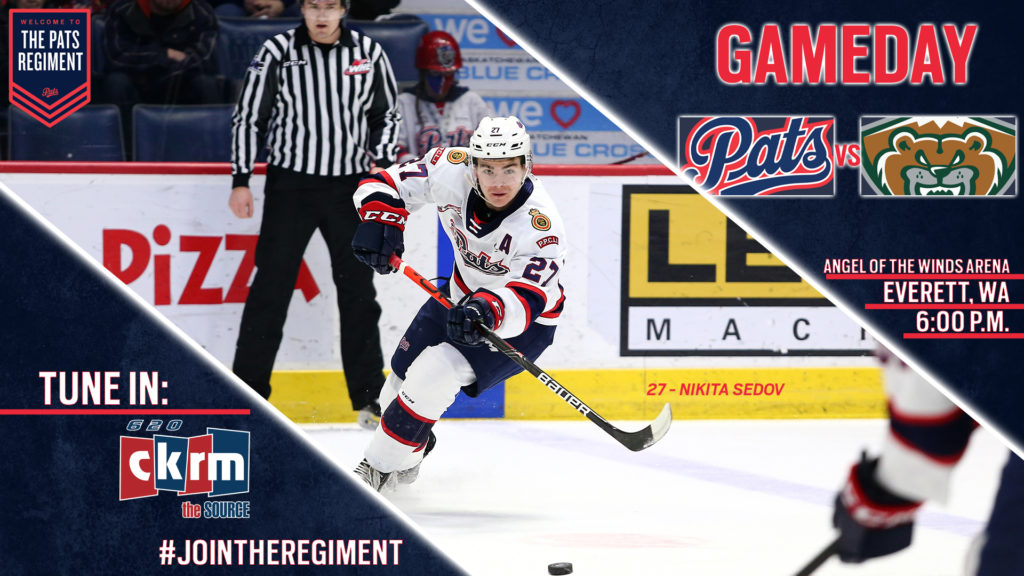 The Regina Pats (12-22-3-2) continue their U.S. Division road trip on Sunday when they visit the Everett Silvertips (26-10-2-1). Puck drop is at 6:00 p.m. Regina time at Angel of the Winds Arena. Pats started their road trip with a 5-4 loss in Tri-City against the Americans on Saturday night. The Silvertips last game was Saturday when they lost 4-3 in Seattle to the Thunderbirds. Tonight is the first and only meeting of the season between Regina and Everett, the Pats lost the lone meeting last year at home, 5-1. The game can be heard with Bennett Dunlop Ford Pats Hockey starting at 5:35 p.m. on 620 CKRM.

Quick Facts
– The Pats are 7-3-0-0 in their last 10 meetings with the Everett Silvertips.
– The road team has won the last four meetings between Regina and Everett, the Pats were the last to get a home victory in January of 2015.
– Regina is 4-4-0-1 in nine games since the Christmas break.
– Caron Denomie has three goals and three assists in his last five games.
-Logan Nijhoff has scored two goals and has two assists in his last two games played.
– Zach Wytinck played in his 200th career WHL game on Saturday night against Tri-City, picking up an assist to reach 99 career points.

Nijhoff Rolling
Pats forward Logan Nijhoff has put together back to back, two-point nights. The 18-year-old had two assists on Saturday night against Tri-City and scored twice in the Pats 5-4 shootout win over Prince George on Wednesday. The product of Comox Valley, B.C. is up to eight goals and 11 assists for 19 points in 38 games, both of which are a career high. His previous high for a season came in 2018-19 when he had seven goals and 10 assists for 17 points in 59 games. Nijhoff has scored 18 goals and 42 points in 127 career games in the WHL.

200 Career Games
Pats defenceman Zach Wytinck hit the 200 games played mark in the WHL on Saturday night. The 20-year-old picked up an assist in that contest. He started his career in 2016-17 with the Brandon Wheat Kings. Wytinck played in 161 career games with Brandon and has added another 31 games with the Pats this year. Wytinck is up to 99 career points in the WHL and his 32 points this season is tied for sixth among all WHL defencemen and his 27 assists are third most. He has put up 13 powerplay assists this year, that is tied for fourth among all defencemen in the league.

Last Pats Game
The Regina Pats mounted a furious third period comeback but fell 5-4 on the road to the Tri-City Americans on Saturday night. In the first, the Americans got an early goal from Edge Lambert at 3:25 to take a 1-0 lead. Tri-City added another on the powerplay with three minutes left in the frame and it was 2-0 at the break. In the second, the Pats got a five-minute major powerplay and a subsequent two minute five on three man advantage but were unable to convert. Moments later the Americans went up 3-0 on a goal from Sasha Mutala. It stayed 3-0 until late in the frame when Tri-City scored another powerplay goal to take a 4-0 lead to the intermission. In the third, Drew Englot got the Pats on the board five minutes in with his seventh. The Americans responded with a shorthanded goal to go up 5-1. The Pats started a comeback after that when Riley Krane got his 10th, Nikita Sedov his fourth and Drew Englot his eighth to get the Pats within a goal with less than a minute left. The Americans held on in the final 38 seconds to take the two points in a 5-4 final.

Last Pats Game Vs Everett
October 21, 2018 – Nick Henry opened the scoring for Regina but Everett came back with five unanswered to win 5-1 at the Brandt Centre. Bryce Kindopp and Riley Sutter led the way with two-point nights for the Silvertips. Max Paddock made 27 saves for the Pats, Dustin Wolf made 20 saves for Everett.